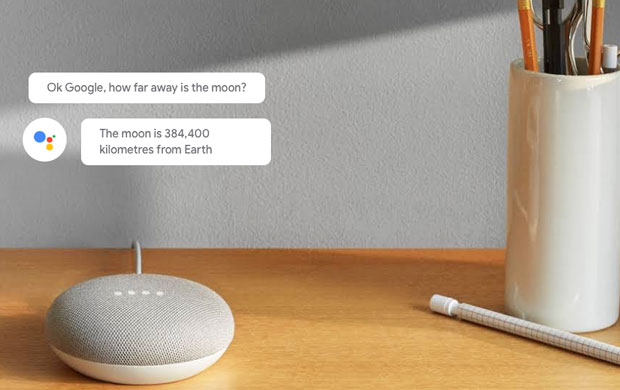 The first wave of reviews touting Google’sHome Mini smart speaker surfaced this week, on the heels of reports thatthe company had to quash a top touch function to prevent the device from accidentally activating and recording conversations without users’ knowledge.

Google has promised to roll out an update to the device by Oct. 15.

The hardware glitch didn’t seem to dim the spotlight on the potentialof the smart speaker, however, which is aslimmed-down version of the flagship Google Home product, powered by Google Assistant.

The small round gizmo comes in chalk, charcoal and coral (Googleonline exclusive). It is only 3.86-inches in diameter and just 1.65 inchesin height, yet it provides 360-degree sound with a 40mm driver. Itsupports HE-AAC and LC-AAC+ audio formats, and it supports WiFi andBluetooth connectivity. It runs on the Android operating system.

Among its capabilities, the Home Mini can provide reports on weather, traffic, news, sports and more. Like the original Google Home, the Mini can keep track of schedulesand calls, provide reminders, and act as a virtual assistant. Inaddition, it can serve as the control center for compatible home automation devices.It can be used with Chromecast to stream music, movies and TV shows to a TV or external speakers.

The Google Home Mini is available to order at the Google Store forUS$49.00, and it will begin shipping by Oct. 18.

The early hands-on reviewers gave kudos to the looks andfunctionality of the Google Home Mini.

“The Google Home Mini is a handsome little thing,” wrote Adam Clark Estes for Gizmodo. “The device actually looks nice, like an eccentric decoration that connects to the internet and does things.”

Reviewers appreciated the material and construction of the device.

“The top is covered in a woven cloth material, while the bottom halfis plastic with a big rubber foot,” wrote Ron Amadeo for Ars Technica.”It looks like someone stuck a donut inside a sock. Since the GoogleHome Mini looks like a piece of laundry or a couch cushion, it blendsin to a home environment much easier than the white plastic obeliskthat is the original Google Home.”

The Google Home Mini scored points for functionality as well as form.

“On the software end of things, the Google Home Mini also excels,”added Gizmodo’s Este. “Set up takes approximately six seconds with theGoogle Home app — which you won’t really need to use afterwards sinceyou program all of the actions with the separate Google Assistant app.”

“While the larger Home has three speakers to drive an impressivelyfull sound, the Home Mini makes do with one, top-firing speaker,” noted Dan Seifert in his review for The Verge. “As a result, it does not sound nearly as good as the larger Home, and does not work well tofill medium to large rooms with music.”

The Home Mini’s speaker points straight up, which likely isn’t the best way to disperse sound.

“The Mini isn’t any good at playing music,” Ars Technica’s Amadeo said bluntly. “It seems tuned for voice and voice only, which is fine for hearing command affirmations and the weather report.”

The quality of the voice is clearly where the Home Mini make maximum impact.

“Voice responses from the Home Mini sound great — much better than thecan of bees you get from Amazon’s Echo Dot,” added Seifert. “And itdoes get loud enough to hear from across my living room.”

Shutting Down the Recording

Even with its attractive gateway pricing, the Google Home Mini willhave to overcome one significant issue — namely that a potentialprivacy concern already has been discovered.

Google quickly responded by disabling the device’s ability to listen in — some wouldsay spy — but it isn’t clear if the damage control was enough.

“The glitch is an embarrassing episode for Google, but their responseto permanently disable the feature shows how seriously Google takesprivacy,” explained Josh Crandall, principal analyst at Netpop Research.

“They are reacting in a responsible way to the situation — and luckily,the market is still nascent,” he told TechNewsWorld.

The hardware snafu may reflect Google’s zeal to push a competitive product into the market quickly, even if it meant taking some quality control risks.

With the Home Mini, Google may be hoping to attract interest beyond the early adopter crowd. The Mini may serve as an affordable gateway to smart speakers in general.

“Household adoption of virtual assistant appliances is still very low,so this is not a zero-sum game at all,” he told TechNewsWorld.

“Given that consumers in general have short memories and the productsand product features are evolving so fast, I expect that both Amazonand Google virtual assistant appliances have a lot of growth ahead ofthem,” Teich added.

Still, the Google Home Mini could be more an attempt to catch up than to breakout.

“While there are a number of competitors in the game, the maincontenders continue to be the big technology companies — Amazon,Google, Microsoft and Apple,” suggested Crandall. “Amazon’s Echo hasquickly taken the lead, but Google and others aren’t going to cave.”

Battle for the Home

Smart speakers in general showcase a different way of capturing anaudience that traditionally has used a screen — whether it is thesecond screen on the desktop or the third screen on mobile devices –to connect to the Internet. They are an extension of the larger smart home play, which in itself is just one facet of the enormous Internet of Things.

“One of the most interesting aspects of the recent Home Mini launchwas how it reflected Google’s growing presence in smart homeinfrastructures,” said Charles King, principal analyst at Pund-IT.

“Aside from thespying glitch,” King said, “Google appears well positioned to compete against itsrivals for a place in increasingly intelligent homes and consumerservices.”