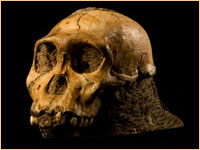 Scientists on Thursday announced the discovery of a new species of hominid, thanks to fossils whose whereabouts were located with the help of Google Earth.

Dating back almost two million years, Australopithecus sediba was discovered in the Cradle of Humankind World Heritage Site in South Africa. The species appears to have had long arms, like an ape; short powerful hands; and long legs capable of striding and possibly running like a human.

Lee Berger, a palaeoanthropologist from the University of the Witwatersrand, led the discovery, which was published Friday in the journal Science.

“I believe that this is a good candidate for being the transitional species between the southern African ape-man Australopithecus africanus — like the Taung Child and Mrs. Ples — and either Homo habilis or even a direct ancestor of Homo erectus, like Turkana Boy, Java man or Peking man,” Berger said.

Berger began using Google Earth back in 2008, Michael Jones, chief technology advocate with Google, explained in a company blog post. While Berger initially used the technology primarily to map the 130 or so caves and 20 fossil deposits he and his colleagues had already identified over the past decades, he also began using it to locate new fossil deposits by learning to identify what cave sites looked like in satellite images.

In fact, with the help of the navigation facility and high-resolution satellite imagery in Google Earth, Berger went on to find almost 500 previously unidentified caves and fossil sites, Jones noted. It was one of those new fossil sites that yielded the discovery of Australopithecus sediba.

Specifically, fossils of a juvenile male and an adult female were found deposited within a single debris flow in the remains of a deeply eroded cave system. They were preserved in a hard, concrete-like substance known as “calcified clastic sediment” that formed about 1.9 million years ago at the bottom of what appears to be a shallow underground lake or pool.

Also nearby were the articulated skeletons of a sabre-toothed cat, antelope, mice and rabbits.

Scientists around the world are touting the discovery as an extremely significant one.

“It’s always an important discovery when you find pieces of the same skeleton in the human fossil record, so the announcement of two such fossil individuals is compelling news,” Richard Potts, director of the Human Origins Program at the Smithsonian Institution’s National Museum of Natural History, told TechNewsWorld

“The fossils come from a time period that is well-known, in East Africa, for several contemporaneous lineages of early human species,” Potts added, and “show that there is even more diversity in our evolutionary tree to discover.”

Berger’s team “has shown that the new fossils display a previously unknown combination of features — an overall body shape of Australopithecus, yet some features reminiscent of the genus Homo,” he noted. “The researchers connect their discoveries to one of the big issues in the study of human origins, the origin of the genus Homo.”

As a result, two questions are raised by the announcement, Potts said. First, “How well do the discoveries relate to the origin of Homo when, in fact, teeth and other fossils with features indicative of Homo have been found perhaps 400,000 to 500,000 years earlier in time?” he explained.

Second, “since the A. sediba fossils come from only a single point in time, with two possibly related individuals preserved in the same debris flow, does this newly announced species reflect a short-lived variation, perhaps at the tail end of a previously known species of Australopithecus, such as A. africanus?

“Or will further discoveries show that the fossils really do represent a persistent branch of our evolutionary tree — one that is significant in understanding the pattern of human evolution?” Potts wondered. “So far, we don’t know.”

It may be years before more discoveries can help answer those questions, Potts pointed out.

What seems likely, however, is that Google Earth and other technologies will continue to play a role in such discovery.

“Any time you instrument something as deeply as Google Earth does, there’s a chance somebody remotely viewing that offering will see something nobody else has seen,” Rob Enderle, president and principal analyst with the Enderle Group, told TechNewsWorld. “It does open a relatively significant window to new discoveries.”