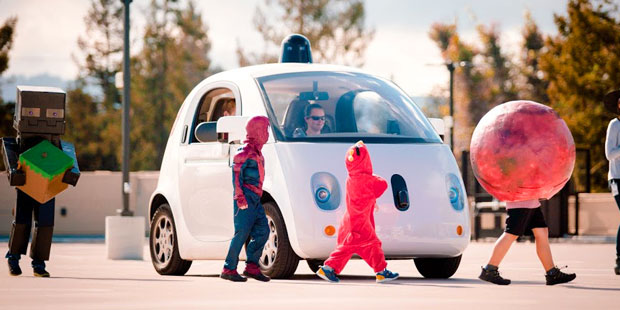 Google last week announced that it has developed technology for its self-driving vehicles that would be able to detect people in costumes — presumably children dressed for Halloween.

The company is teaching its cars to drive more cautiously around children and thus be ready to adapt to sudden and even erratic movement, it said.

Google’s engineers are striving to help the cars react, especially as children’s behavior can be unpredictable. The vehicles are designed to scan for those in costumes or other garb that might make them not immediately recognizable as a person.

Google’s announcement is the latest example of how autonomous vehicles could be safer than human drivers — especially at times such as Halloween when more people are out on suburban streets after dark.

“Autonomous vehicles are probably already safer than half of the drivers on the road today,” said Paul Teich, principal analyst atTirias Research.

“Autonomous cars have a 360-degree unobstructed view around the car that is designed to spot for objects and movement,” he told TechNewsWorld.

It isn’t just that the cars can see in all directions, but that the vehicles can do so in more wavelengths than what humans can see, Teich said.

The technology also could be programmed to determine potential risks.

“Anticipating and avoiding people is a major component of self-driving car efforts and will likely (include) an early-warning feature,” said Rob Enderle, principal analyst at the Enderle Group.

That could include programs that can react quickly to fast-changing situations, “like a child chasing a ball into the street,” he told TechNewsWorld.

“Properly programmed, it shouldn’t speed and it should be far more capable of seeing and adjusting to ice, snow and rain. It really comes down to the fact that humans often drive unsafely,” Enderle said, but a machine’s driving wouldn’t be impaired unless the system malfunctioned, perhaps due to a sensor failure or even a hack attack.

The machines do have an advantage in that the human eye is limited in its range and field of view, and most people aren’t even seeing at 100 percent of the eye’s potential.

“We have to remember a lot of people need glasses, so there is that,” explained Tirias Research’s Teich.

“The other part of it is that people at their peak of abilities are good when it comes to reaction times and seeing potential dangers, but the fact is that most of us aren’t at that peak for very long but we’re still behind the wheel,” he added.

What humans can see may be just part of the issue, noted Susan Schreiner, analyst withC4 Trends.

“Sound is the other half of it, as in what people on the street hear,” she told TechNewsWorld.

“As we shift to electric vehicles, the cars aren’t as loud, so perhaps the sensors need to be tied to an alarm that could sound when it senses something — like a child running in the street,” Schreiner explained. “These are the pieces that need to come together for people to accept that the car is safer.”

The acceptance of autonomous vehicles as well as the perception of potential safety could come down to demographics.

“The older generation will likely savor the human element that comes with driving, even if many older drivers may not be the safest drivers. As a result, we may go through a transition period as people begin to accept what the car can do,” Schreiner noted.

“Yet U.S. consumers are not ready to give the vehicle full control at all times, but rather want the vehicle to take control during stressful scenarios like poor visibility or bad weather,” he told TechNewsWorld.

“As technology advances and consumers are getting more used to these automated features and initial glitches are solved, and if the vehicle does support them on stressful situations, the ultimate change in attitude will be more inclination to adopt these,” Chandrasekar added. “Ultimately, the price will be a huge deciding factor.”