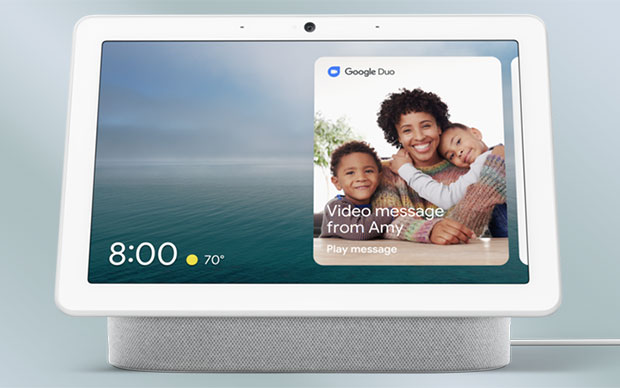 The new Nest Hub Max has a 10-inch screen, compared to its predecessor’s 7-inch display, and it sells for US$229, compared to $129 for the Nest Hub introduced at Google’s I/O conference in June.

“I like the big screen on the Nest Hub Max, since I was able to watch a football game in the kitchen and still see the score,” wrote Todd Haselton for CNBC.

One of the best things about the Nest Hub, and now the Nest Hub Max, is viewing pictures from Google Photos, he added. “My wife and I love seeing old memories pop up on the regular Hub when we walk into the kitchen, and now they’re even bigger.”

The Max also has a built-in video camera, which can double as a security cam, and it supports gesture commands, video calls and facial recognition.

“The Nest Hub Max does do most of its advertised functions well … and it is a very competent smart display with some features that stand out from the crowd,” wrote Dan Seifert for The Verge.

“But it asks a lot from you to get those functions: a higher price (especially compared to the frequent discounts on the Nest Hub), a larger footprint, and trust that the camera won’t be hacked or used for nefarious purposes,” he continued. “If you’ve been wanting a Nest Hub that just does more, the Hub Max is it. But for most people, the Nest Hub is the better smart display to purchase.”

The Max’s use of facial recognition for a variety of tasks, including personalizing content for users of the device, concerned some reviewers.

“Even though Google says it keeps your facial recognition data locked down to the device and doesn’t use it for anything else, I’m a bit skeptical,” wrote CNBC’s Haselton.”For one, you need to register your face on a phone, so it has to travel to Google’s servers first before it lands on the Hub Max.”

Others expressed different views on the technology, however.

“Within hours of unboxing and setting up the Nest Hub Max, it became clear to me that the implementation of facial recognition with Google Assistant is a game changer,” wrote Ben Schoon for 9to5Google.

“With this simple addition, Google Assistant has become truly proactive and I absolutely love it,” he added.

The value of facial recognition dawned on him as he was walking past his Max and a reminder he’d set up on his phone suddenly appeared on the hub’s screen, Schoon wrote.

“I have an awful memory at times, so reminders that pop up not just at a certain time or when I go to a certain place but that actively appear as I’m walking through my home is a huge deal,” he explained. “Even after just a few days of use … I can already say that I think the Nest Hub Max is worth its full asking price of $229. Face Match alone makes it much more useful than any other smart speaker or display on the market right now.”

Early reviewers of the Max agreed that the addition of a camera was a major improvement in the product line.

“The Hub Max is not the first smart display with a camera built into it, but it is the first one to let you do more with the camera than just make video calls,” em>The Verge’s Seifert wrote.

“The Hub Max can actually ‘see’ who is in front of the display and present personalized things to them, such as upcoming calendar appointments, flight schedules, messages, and package deliveries,” he continued.

Although he typically covers the camera in other smart displays with tape for peace of mind, “with the Hub Max I’m inclined to leave the camera on because it’s useful for so many other things aside from video calling,” Seifert wrote. “I just won’t be putting it in my bedroom.”

Google has included a hardware switch on the unit that shuts off both the camera and microphone.

“The ability to shut off both the camera and the microphone will appeal to those who have privacy concerns regarding these devices,” said Dina Abdelrazik, research analyst at Dallas-based Parks Associates, a market research and consulting company specializing in consumer technology products.

“Privacy concerns with always-on listening devices is a key barrier to adoption of voice-first devices,” she told TechNewsWorld. “Consumers harbor little trust for device manufacturers in accessing and managing their personal data.”

However, there may be a gap between public opinion about privacy and market dynamics, suggested Mark N. Vena, senior analyst at Moor Insights and Strategy, a technology analyst and advisory firm in Austin, Texas.

“Privacy continues to be a concern with consumers based on surveys, but it’s not slowing down customer interest,” he told TechNewsWorld.

The Max’s camera has a 127-degree wide-angle lens, with subject tracking, which will keep a subject in the center of a video frame no matter where they are in the room. Facebook’s Portal product line has a similar feature.

“It made it much easier for my kids to stay in frame than other devices that have a more limited field of view,” Siefert wrote.

“The ‘camera’ panning and zooming as it follows me around is so realistic and accurate that it can feel a little creepy,” Nicole Lee noted for Engadget.

While satisfied with the camera, Lee was disappointed that the only video calling service the Max supported was Google’s Duo.

“Adding contacts is kind of a pain — both sides need to set up a Duo account — and the contacts list on the Duo app on your phone is not necessarily the same as the Duo contacts in the Hub Max,” she explained.

“That’s because the app relies on your phone’s address book, while the Hub Max pulls its contacts from the Google Contacts list on the Web,” she continued. “Yes, you can sync them, but I found this to be tedious.”

The Max’s camera also can be used to monitor your home while you’re away. It will send you alerts, send you live-streaming video, and let you conduct conversations with anyone in front of the Max. It also supports Nest Aware, a service that includes continuous video recording and the ability to recognize familiar faces.

“No other smart display offers this kind of extended functionality with the camera, and it sets the Hub Max apart,” Siefert wrote.

The camera enables the use of “Quick Gestures” to control the Max.

“Quick Gestures include the ability to turn the music off by raising your hand and showing your palm like a stop sign towards the camera,” wrote Asha Barbaschow in ZDnet. “This is actually useful — definitely more user-friendly than screaming ‘OK Google pause’ constantly over loud music until it hears you.”

Setting up the Max could be challenging, though, she noted.

“Setting the device up was time consuming, but it’s actually worth putting in the effort to do it properly, as the assistant — even after 24 hours of infrequent use — started serving up useful information,” Barbaschow wrote. “Besides, if it’s done right the first time, it shouldn’t need to be touched again.”

Reviewers were divided on the sound quality of the Max.

The Max’s sound is superior to its predecessor, in Seifert’s view.

“The bigger Hub Max is also much louder and better sounding than the smaller version. It can fill a room with music and gets loud enough to overpower the sound of a running faucet while I’m doing dishes,” he wrote. “But compared to the [Amazon] Echo Show, the Hub Max doesn’t sound nearly as full or powerful.”

The Max’s sound is better than the Nest Hub, Engadget’s Lee also found.

“Thanks to two front-facing tweeters and one rear-facing woofer, high notes sounded clean and clear, while bass was satisfyingly deep and rich,” she wrote. “No, it’s not quite as good as a multiroom Sonos setup, of course, but as a standalone speaker for playing party jams, the Hub Max should be more than suffice.”

The Max’s sound performance was a disappointment to CNBC’s Haselton, though.

“For $229, I expected something better, but they get irritating at high volumes. They’re fine for just playing casual music in the kitchen, but you won’t want to replace your Sonos speakers for this,” he wrote.

“That’s kind of annoying, since I now have to keep a Sonos speaker in the kitchen in addition to a smart display, just to make sure I have good music in the room everyone hangs out in,” Haselton added.

“The price is a bit too high,” he told TechNewsWorld. “Many of the other criticisms of the Next Hub Max can be fixed with changes in the software. I think the platform will evolve over time.”