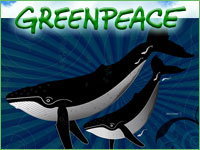 Behind every cloud there supposedly is a silver lining, but a new report from Greenpeace, titled “How Clean Is Your Cloud?” may mean stormy weather for Apple, Amazon and Microsoft. The three tech giants use “dirty” energy to power their data centers, according to the report, which was released Tuesday.

Greenpeace looked at 14 of the largest tech companies’ data centers and offered assessments of how much power they required, as well as what type of energy they used.

The two main sources of “dirty” energy are coal and nuclear, according to the organization, while clean/renewable energy sources include solar, wind, hydroelectric and geothermal.

Companies that ranked highest in the “clean energy index” included Yahoo, Dell, Google and Facebook, while companies ranking the lowest included Salesforce.com, Oracle and IBM. Amazon, Microsoft and Apple were called out as the leaders of a rogue’s gallery of dirty energy-using tech companies.

“It is important to note that our report covers 14 companies in total,” Casey Harrell, IT analyst for Greenpeace, told TechNewsWorld. “It is worth saying that the gauntlet has been thrown, as many companies make the switch from dirty and dangerous energy sources to clean and renewable energy sources. We did expect more from those three companies.”

Going to the Source

While this report focuses attention largely on those leading tech giants, much of the so-called “dirty” energy usage is based on Greenpeace estimates, which in turn are based in part on industry standards. This raises the question of whether it is even possible to determine the actual sources of the energy used by these companies.

“This whole notion of assigning green electricity usage is not realistic,” said Robert N. Stavins, Ph.D., of the Belfer Center for Science and International Affairs at Harvard University.

“Electrons do not carry a signature,” he said. “It is not possible to say universally where this electricity is coming from.”

While hydroelectric is gaining in the Pacific West, natural gas remains big in the Coastal South, with significant nuclear capacity in New England, and the “dirty” coal in the central U.S. So a company with a presence throughout the country could be using power from numerous sources.

Aiming at Apple, Amazon and Microsoft

“Targeting those companies really has more of a symbolic value,” added Stavins. “Those are the types of companies that take tremendous social and progressive responsibility, and this may be why they are targeted by Greenpeace.”

Apple, Amazon and Microsoft also are known to attract a cadre of young and talented employees who may be drawn for the social responsibilities of the companies, stressed Stavins.

Greenpeace does not refute this argument.

One concern Greenpeace noted is that the companies could be so far leading the wrong way.

“Last week Microsoft announced that it would be opening a data center in Wyoming,” said Harrell, who emphasized that the state relies heavily on coal-powered plants. Even if Microsoft manages to use greener options, those following the software giant to Wyoming might not do so.

“The track record shows that when there is data center investment in an area by one of these companies, a number of other companies follow, and these might not be as green,” added Harrell.

However, Wyoming could make sense in other ways, said Andrew Coleman, managing director at Raymond James.

“The power markets are still largely regional, and we have to look at the cost to build a center elsewhere where it might be more expensive, but also whether the grid could support it,” Coleman told TechNewsWorld.”In Seattle, there might be greener options — but if the grid is taxed, it could result in rolling blackouts.”

It could also bring economic development that would create a demand for green energy.

“It creates jobs and could also offer tax breaks that could make this more affordable for the users,” said Coleman.

Does the Data Add Up?

While Greenpeace’s numbers were based on industry standards, the companies cited in the report have countered that the figures do not add up, and that they are making efforts to rely more on green energy.

“Our data center in North Carolina will draw about 20 megawatts at full capacity, and we are on track to supply more than 60 percent of that power on-site from renewable sources including a solar farm and fuel cell installation which will each be the largest of their kind in the country,” said Apple spokesperson Kristen Hugue.

“We believe this industry-leading project will make Maiden the greenest data center ever built,” Hugue added, “and it will be joined next year by our new facility in Oregon running on 100 percent renewable energy.”

Amazon also questioned the accuracy of the Greenpeace report.

“As we communicated to this researcher several weeks ago, we don’t disclose this information publicly, but his data and assumptions about Amazon are inaccurate,” Amazon spokesperson Tera Randall told TechNewsWorld.

“Amazon Web Services believes that cloud computing is inherently more environmentally friendly than traditional computing,” Randall said. “Instead of each company having their own datacenter that serves just them, AWS makes it possible for hundreds of thousands of companies to consolidate their datacenter use into a handful of datacenters in the AWS Cloud, resulting in much higher utilization rates and eliminating the waste that occurs when datacenters don’t operate near their capacity. The cloud enables a combined smaller carbon footprint that significantly reduces overall consumption.”