Hidden in Plain Sight: A Missing Branch on the Tree of Life

It must have been a heart-stopping moment four centuries ago when the earliest users of the original optical microscope first peered through the device at a drop of pond water.

Although that water had surely appeared clear to the naked eye, a virtual parade of unfamiliar and even sinister-looking blobs must have seemed to take its place under the microscope, suggesting the existence of a fully populated world hidden right before our very eyes.

Such, indeed, was essentially the case, as we’ve since come to better understand.

Recently, however, scientists have had cause to experience a similar feeling all over again — this time on a very different scale.

Breaking Free of the Lab

Pond water, it turns out, plays a key role in this modern discovery as well, for the way it helped a UK-based team of scientists look at fungi in a new way.

It’s a persistent truth in the scientific realm that the methods we use to study the world must necessarily determine what we find. Before the advent of the microscope, for example, our findings were largely limited by what we could observe with our own eyes.

In the ensuing time, however, scientists studying fungi have come to focus primarily on types that can be grown in the lab, and it now looks like that preference may have skewed our understanding of the kingdom. 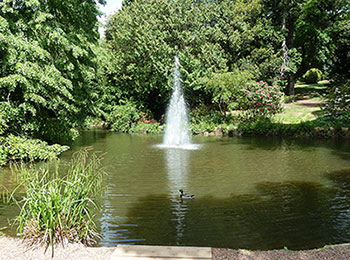 The University of Exeter campus pond where the initial samples were taken.

Rather than relying on lab-friendly fungi, a research team led by Thomas Richards, an evolutionary geneticist and Leverhulme Early Career Research Fellow at the University of Exeter, recently sampled water from a local pond and isolated DNA directly from the microbes they found growing there.

When they compared the genetic sequences of their sample with those from known fungi, it was clear they had found something new and different.

To explore further, the researchers then illuminated the cells of this new microbe using a fluorescent probe. What they found was surprising.

Specifically, whereas one distinguishing feature of the fungi kingdom as a whole is a tough cell wall made from chitin, this new organism lacked that feature altogether.

“This study has been very surprising — not least because the original sample came from the nearby pond,” Richards explained. 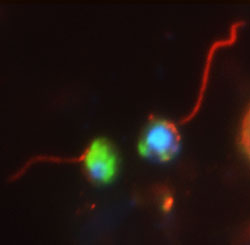 “Fungi have been well studied for 150 years, and it was thought we had a good understanding of the major evolutionary groups, but these findings have changed that radically,” he added. “Current understanding of fungal diversity turns out to be only half the story — we’ve discovered this diverse and deep evolutionary branch in fungi that has remained hidden all this time.”

Further analysis revealed that the new organism is present in samples from all over the world, suggesting that it may play a key role in a wide variety of environmental processes.

The researchers named the group “cryptomycota,” which means “hidden fungi.” The results of their research were published last month in the journal Nature.

‘The Advent of Molecular Systematics’

“Previously the majority of this type of work was conducted by trying to culture, or grow, microbes sampled from the environment back in the lab,” Richards told TechNewsWorld. “This gives a very biased view of natural diversity, only sampling microbes that like to grow in laboratory conditions.”

The new DNA methods, on the other hand, not only overcome such biases — at least in part — but have also consistently identified novel groups, he said.

Indeed, “it’s the advent of molecular systematics” that has made such discoveries possible, agreed Rytas Vilgalys, a professor in the biology department at Duke University.

“It’s the same story for all microbes,” Vilgalys added.

In the realm of bacteria, for example, “there are many studies that have shown many, many more species of bacteria present than we ever imagined, and that the diversity of those species has also been understated in the past,” Vilgalys explained. “The same is definitely proving true for the fungi.”

This latest research “has cool implications,” Vilgalys told TechNewsWorld. “They may have actually detected an intermediate form, whether or not it’s a true fungi. That’s pretty exciting.”

The only previously known fungus found to lack a chitinous cell wall is the genus Rozella, a group of “parasites that make a living feeding off the insides of water molds,” Timothy James, assistant professor and curator of fungi at the University of Michigan, told TechNewsWorld.

Rozella has long been viewed as an oddity within the kingdom, but now it looks like that genus may not be a single outlier but rather part of a newly discovered branch of the fungus evolutionary tree. It remains to be determined whether these organisms are true fungi or part of a related sister group.

Adding to the importance of the Richards team’s discovery, meanwhile, is the fact that fungi represent the biological kingdom most closely related to animals, so understanding fungal diversity could help shed new light on animal diversity as well.

‘There Are 1.5 Million Species’

Whatever its implications for the animal kingdom, it seems fair to say that the discovery of cryptomycota is likely just one example in a long line of such discoveries still to come, thanks to the molecular techniques now commonly used in the scientific world.

Indeed, “the time is now ripe where DNA-based environmental microbiology merges with state-of-the-art visualization and probing methods and molecular phylogenetics,” James asserted. “We estimate there are 1.5 million species of fungus on our planet, but only 100 thousand have been found and named.”

‘They Will Completely Change Our Understanding’

With the advent of today’s molecular techniques, more such discoveries are bound to be made, Vilgalys agreed.

When that happens, the implications could be far-reaching.

“I think there are many more discoveries like this to be made,” Richards said, “and they will completely change our understanding of the tree of life and the evolutionary history of life on Earth.”