What is a high-end entertainment system? That question can be answered in a variety of ways. For some people, “high-end” means systems bought at a specialty retailer, e.g., Bang & Olufsen, Tweeter or Ultimate Electronics. For others, price determines a high-end entertainment system — US$5,000, $10,000, or more for a TV with a 5.1 surround-sound system. On the other hand, audiophiles think of a critical listening room equipped with Krell components and B&W loudspeakers when asked about high-end entertainment. For our report, we settled on the following: Home theaters and audio systems that are typically installed professionally as opposed to purchased at retail or online and set up by users.

Customers of the home systems integration channel are spending an average of $12,000 to have audio systems installed, $25,000 for home theater installations, and $30,000 or more for whole-house control systems. Clearly, they are upper-income households, or they wouldn’t be able to afford these systems. This high-end market is a leading indicator of products, services and capabilities that will succeed in mainstream consumer markets when prices, packaging and delivery methods match what typical consumers can afford.

Plummeting flat-screen TV prices are a good example of how technology advancements are bringing high-end products to mainstream markets, enticing millions of households to pitch their tube and hang a plasma or LCD TV on the wall. Once the screen is on the wall, adding a multichannel sound system with surround-sound speakers is a natural progression. The next step is a storage system for music, videos and family pictures, a.k.a. a media server. Finally, once all of this is in place, how about a system for distributing audio and video content to other rooms in the house? How can anyone resist?

As installed home theaters and multiroom audio systems become more affordable, a broader market of consumers at lower income/wealth levels will open up. This trend is evident as we look over results from numerous Parks Associates’ consumer surveys. Ownership of all forms of entertainment systems is extensive, and intentions to purchase larger (40+ inches) flat-panel TVs and multiroom audio systems are high. Parks Associates’ Digital Media Habits II (3Q/’07) study revealed that more than 20 percent of broadband households in the U.S. planned to purchase a flat-screen TV within 12 months, and 66 percent intend to buy one 40 inches diagonal or larger. With this research in mind, we see a natural evolution in the high-end A/V market as systems become more affordable and accessible to a larger base of customers.

As mentioned, the vast majority of current high-end A/V customers are wealthy … they have to be in order to afford the systems. In addition, most installed entertainment systems are currently sold into the new-home construction market or into homes going through a major renovation. This mix will change as wireless, power line, and other “no-new-wires” technologies gain more traction in the market, particularly among home systems integrators who are influential in determining which products and technologies are incorporated in the systems they install.

Most single-family homes in the U.S. are detached units owned by those living in them. However, there are 300,000 to 350,000 living units built in multiple dwelling units (MDUs) annually added to approximately 18 million existing rental units. This market is sizeable and one that can be better addressed by “no-new-wires” approaches for a couple of reasons. People will be able to take their entertainment systems with them when they move, and those living in units where they can’t open the walls will have an alternative. 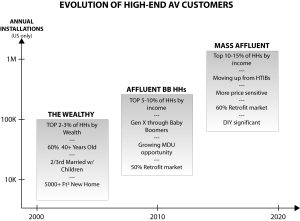 Further in the future (2015 to 2020), not only will the capabilities of high-end entertainment systems become more affordable to the top 10 to 15 percent of households by income level, but they will also become relatively easy to set up by consumers. Parks Associates’ definition of high-end entertainment systems (installed systems) will need to change. The situation is comparable to that of mainframe computers. The capabilities once confined to water-cooled computers in large glass rooms are now in slender laptop PCs we can carry anywhere. Technology changes the market … and our definitions.

Bill Ablondi is director of home systems research at Parks Associates.
Get Permission to License or Reproduce this Article

A Green Carpet for Home Controls

Capitalizing on the Retrofit Market

Remote Home Monitoring: Passing Fad or Wave of the Future?