How Apple Promoted Samsung’s Galaxy Tab and Other Weird Tales

Christmas is coming in a few days, and many of you are kicking back with some eggnog for a well-deserved rest before the day arrives, and you are looking forward to the annual family who-is-the-biggest-ass competition. Yes, this is the time of year when relatives feel the need to overimbibe and tell us how we should live our lives, or they critique our kids or spouses, and we, unfortunately, are likely to do the same.

In this holiday spirit, I’ll look at some vendor dysfunction this week — from Apple and American Airlines to the NTSB — just to point out there are companies and groups apparently more screwed-up than our families.

I’ll close with my product of the week, another Ultrabook. This time it’s from Toshiba, and it appears to be the best one yet.

Apple has been aggressively going after Samsung’s Galaxy tablet. At the heart of this is Steve Jobs’ belief that Android was stolen from him and the fact that the Galaxy tablet is damn near a direct knockoff of the iPad.

The screwy thing is that if you put a new iPad up against a new Samsung Galaxy tablet, to my eye, the Samsung is more attractive, which reminds me of a story. I went China a few months ago and picked up a knockoff of a Breitling and liked it so much that I tried to buy a real one, only to find that Breitling didn’t actually make one that looked as good as the Chinese knockoff. When the cheap knockoffs start looking better than the original, the original vendor has a big problem, and Apple went after Samsung in pretty much every geography.

However, that focused a lot of media attention on the Samsung, and apparently about 20 percent of the market concluded the Samsung was better and bought it. Before the Kindle Fire shipped, that made the Galaxy the most successful non-Apple tablet, and it is still the most successful alternative in the iPad form factor.

In short, Apple’s aggressive defense actually made the Samsung product more successful than it otherwise would have been. Now that was counterintuitive.

I’m an American Airlines lifetime Platinum member and every once in a long while, this means I actually get to sit up in first class, where Alec Baldwin was earlier this month. Baldwin refused to stop playing a game on his iPad when asked by a stewardess and got abusive and was kicked off the flight, resulting in a 45-minute delay.

Now there is no excuse for his behavior, but the rule that forces those of us with electronic devices to shut down on takeoff and landing is stupid — particularly when it is enforced while the plane isn’t even moving, as was the case with Alec. However, it is a rule, and the FAA doesn’t have a sense of humor with regard to compliance, so Alec was getting pissed off at the wrong people.

Many of us have argued that the rule is out of date and should be eliminated, given how many cellphones are accidentally left on and how much electronic noise exists today in airports.

As it turns out, American Airlines agrees, and last week their pilots got permission to do what passengers can’t — use iPads at all times in the cockpit, the most vulnerable part of the airplane. The timing, which is clearly coincidental, is painful, given the Baldwin event — and for passengers, it is a WTF moment. It just seems to emphasize that this rule is brain-dead stupid, so why not just eliminate it so I can read my fricken Kindle during takeoff and landing?

There is no doubt that distractions cause accidents. While she was driving, my grandmother liked to look us grandkids in the eyes but for safety believed we should sit in the back seat. There is nothing more exciting than watching someone drive the car you are in with one hand, while totally focused on what’s going on above your nose while you are seated in the back seat. In other words, when I was growing up, I didn’t need to go on a rollercoaster to have a heart-stopping experience. Last week, the NTSB (National Tragically Stupid Bureau) moved to ban cellphones in cars.

There are degrees of distraction. While talking on a phone is a distraction, looking at gauges, eating, or concentrating on the kids in the back seat is far more likely to cause an accident. I’d argue that banning kids in cars — as attractive as that might be to those of us who have to ride with them — is just as impractical as banning all cellphones. And since we like to look at people when we talk to them, I could argue that talking to passengers while driving is more dangerous.

I just don’t think it can be successfully done, and when an organization passes a rule that is basically unenforceable, it makes all other rules it has passed appear more optional. Police officers — and I used to be one — are people too. While many were on board with the hands-free effort, getting rid of their phones altogether, given they work in their cars, wouldn’t be an option. And what about their radios? They are neither hands free nor nondistracting. They often have full laptops that they use while driving as well.

Having rules that the folks enforcing those rules can’t even comply with is just stupid, and all it will likely do is get folks pissed off at the current administration. I doubt Obama needs any additional help losing the next election, but I wonder if that was the intent.

We seem to be ending the year with some impressively boneheaded moves. The Apple one is forgivable, given the death of the company’s founder and his desire to kill Android, making the result more ironic than stupid. The timing of the American Airlines iPad approval likely could have been better thought out, and the NTSB may have just committed organizational suicide with its unenforceable recommendation.

I’m falling in love with Ultrabooks, given how heavy my backpack ready is, my tendency to carry it on one shoulder, and the fact that one shoulder is significantly lower than the other. (Note to kids: When you have a backpack, use both straps unless you like the uneven-shoulder look and constant back pain.) My current carry box is the Lenovo X1, which was my product of the week some months back.

Toshiba’s Portege Z830 is the best to hit the market yet. It has a svelte 2.5 lb carry weight, unique biometrics, and a touchpad switch (so you can use a mouse without watching your cursor dance all over the screen when you accidently touch the pad). It has a wonderful magnesium frame and finish. 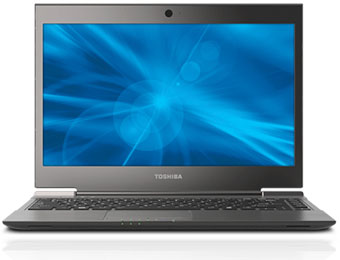 While far from the lowest-priced Ultrabook, the Z830 is the best I have used so far, and if you’re in the market for one of these products, this is where I’d recommend you start. I’m into light, I’m into sexy, and I’m hoping for a future where I’m not always leaning to the right (so is my wife, but then she is a Democrat, and that is a different issue). As a result, the Toshiba Portege Z830 is my product of the week.