How Lenovo Is Resurrecting the PC

I spent much of last week hanging out with Lenovo. Although much of what we chat about in thosemeetings can’t be repeated, one thing I can talk about is how Lenovo almost stands alone in defendingthe PC. While there seems to be a consensus that the PC is dead and being stomped into its grave bywave after wave of smartphones and tablets, Lenovo missed that meeting. In a market defined bydecline, it has demonstrated double digit growth.

It has done this by offering attractive, well-built products; by staying focused; and by executing someof the strongest marketing programs I’ve ever seen. Even its strategy against Apple is uniquelysuccessful: It competes on PCs where Apple is relatively weak worldwide, and it focuses on smartphonesoutside the U.S. and predominantly in China, where Apple is geographically far weaker.

In short, Lenovo picks its fights to ensure that it is moving where the opportunities are strongest, whereits skills are the most competitive, and where its competitors are the weakest.

I’ll delve into why Lenovo is winning in a market that many seemed to think was failing and close with my product of the week: the Nokia Lumia 920, which is my new favorite phone.

The interesting thing about Lenovo is that at its core it has the old IBM PC company and theThinkPad line of products. What makes this interesting is that the last time we had the industry decidesomething was dead in the computer space, it was the mainframe. IBM agreed and chased the client-server market. During that time, Sun Microsystems — the equivalent of Apple in that segment — seemedunbeatable, and IBM almost went under.

Eventually IBM reinvested in the mainframe and established a new brand — System Z. It is now the company’s most profitable line, and Sun has gone out of business as a separate company. In hindsight, had IBM fought theperception that its platform was dead rather than embracing it, it would have been billions aheadof where it is now.

Taking a page from IBM’s book, Lenovo realized that PCs were what it knew best. Rather thansacrifice its strength to chase vendors like Apple and Samsung, it focused on doing what it does best even better — and it paid off. It effectively institutionalized the IBM mistake instead of remaking it.

What’s fascinating about watching how others have competed with Apple goes back to how Applesucceeded in the last decade. Its success wasn’t in becoming a better Dell or IBM. In fact, its onebig failure was in servers, where it failed catastrophically trying to compete againstentrenched vendors. Among Apple’s other products, PCs have been the weakest — largely due to competition from established vendors and an entrenched Windows operating system.

Apple’s successes have been in the MP3 player segment, where the main competitors were smaller than Apple; in smartphones, where the market initially was focused on business and not consumers; and in tablets — but only after Microsoft’s efforts had largely failed in-market. At no instant did Apple ever attack a market where astrong vendor was strongest. Contrast this with Microsoft’s Zune effort: Microsoft chose a market where astrong vendor, Apple, was strongest, and it failed catastrophically.

The technology market is awash with engineering-driven companies that believe that if they build lotsof very different products and throw them into the market, most of them will sell. The expectation is that customerswill gravitate to the products they want.

Most companies don’t seem to understand the power of marketing and thatit is this power that has driven Apple’s bottom line so strongly. Marketing allows a firm to drive peopleto a smaller selection of products, which, if done correctly, results in fewer mistakes and much highersales success.

Lenovo has taken a page from Apple’s book, largely by using an Apple trained CMO, David Roman, to drive itsmarketing efforts and by leveraging social media. For instance,this video was created by some of the folks who do the James Bond films, and it went viral. The product it showcases — the Lenovo YogaWindows 8 tablets — has been the showcase OEM tablet for Windows 8 as a result.

Lenovo wins because it invests in marketing, it gets quality marketing people, and itexecutes strong demand-focused campaigns — using both traditionaland social mechanisms — that drive people to its products.

I’m in a room with a ton of technology analysts. Of the 25 people in my section, three of us are ontablets, while the rest are on notebooks. Of the three tablet users, two of us are using keyboards, so our tablets areeffectively notebook surrogates. The one guy who is using his tablet as a tablet has his notebookcomputer right next to it so he can do real work. Ironically, I’m the only person who left my notebookat home and brought only a tablet.

Lenovo has realized that the PC market isn’t dead and that Apple isn’t invulnerable, and it is investingaccordingly. As a result, Lenovo is growing the fastest among its peers and doing the best against Apple inthe most segments.

There is something refreshing about watching a company execute with excellence. Whether it is Apple or Lenovo, it is great to see firms think strategically to out-execute their peers. I just wish other executive teams would watch more closely so more could be as successful.

Product of the Week: Nokia 920

I finally got a Nokia 920, and it was worth the wait. What makes the Nokia different from theWindows 8 HTC phone I covered earlier is that it has a much better camera. Also, you can use aninductive charger. It is aggressively priced at AT&T at just under US$100 with a two-year contract.

I use my phone camera as my primary camera, and the combination of active stability control, a goodflash, and an excellent imager easily makes this the best phone camera in the market and one of mybest cameras, period. 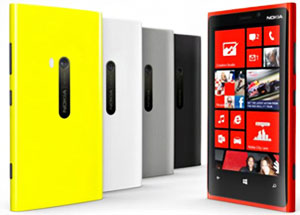 The inductive charging is wonderful. I often find I’m struggling to get the damn charging plug into a device late at night and often don’t seat the plug properly and end up with a dead phone. With inductive charging, you just put the phone on the charge. Even half asleep, I can do that.

Nokia ships with one of the best GPS apps in the market, and it is free with the phone. Some Windows phones require a monthly charge to enable GPS. This is one of the few 4G phones that hasall-day battery life — most run out of power in about six to eight hours, leaving you on fumes or dead by theend of the day.

My only real complaint is the phone doesn’t come in blue. Apparently folks love thisphone, because record sales had Nokia stock up about 30 percent last week. Since this is the best phoneI’ve ever tested, the Nokia 920 is my product of the week.