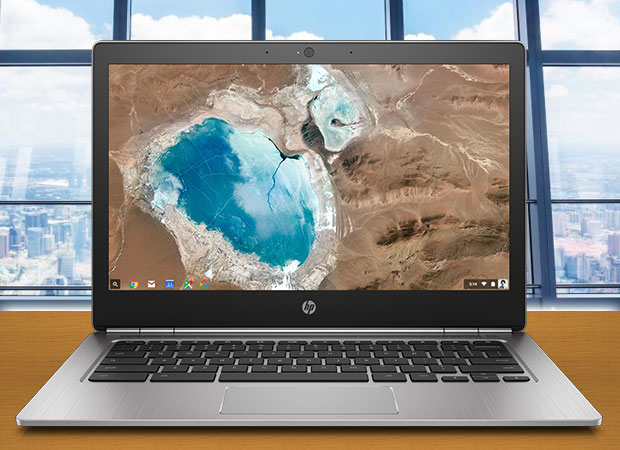 Designed with input from customers on what they want in a next-generation Chromebook, the device is about 13 mm thick, weighs 2.8 pounds, has a brushed anodized aluminum chassis, and is the first Chromebook to use Intel’s sixth-generation Core M processors.

It has a USB C port, and HP offers a USB-C docking station as an option at US$145.

“These are solid improvements, but they don’t address the core problem — that the platform is considered to be crippled,” observed Rob Enderle, principal analyst at the Enderle Group.

“This is like taking a Smart car, which is largely seen as crippled, and wrapping it with gold to justify a higher price,” he told TechNewsWorld.

The HP Chromebook 13 will be available this month starting at $500.

The device comes with up to 16 GB of memory. Its high-capacity 45-watt battery delivers up to 11.5 hours of use.

The HP Chromebook 13, which targets the business and consumer markets, has a 13-inch QHD+ display with 3200 x 1800 pixel resolution.

Its basic configuration includes an Intel Pentium M processor, 4 GB of RAM and 32 GB of flash storage. Buyers can opt for a Core M3, Core M5 or Core M7 processor and up to 16 GB of RAM.

The device can be fast-charged using the included adapter and charged on the go through other USB-C power adapters or a phone charger.

Some models come with Lucid Sleep, which updates documents, emails and notifications while the device is in sleep mode.

Security is provided through the Chrome OS’s security features.

It’s “a fantastic design at that price, except for the OS,” commented Linn Huang, a research director at IDC.

Not Just for Schoolkids

“Right now, the entire Chromebook market is weighted heavily on K-12 education in the United States,” he told TechNewsWorld.

The success of the lower-end players — Acer, ASUS and Samsung — in that market “attracted the big enterprise players — Lenovo, Dell and HP,” Huang said. Dell “dove into the deep end in education in Q3 2015 because that market was going gangbusters.”

Look for Chromebook prices to rise even further, Huang predicted.

However, “the main selling point of Chromebooks so far is that they’re really, really cheap,” Enderle pointed out. Chromebooks “are the Netbooks of this decade, and that isn’t easily fixed.”

Companies with a lot of contract employees who “don’t need a lot of high-powered access,” or those with employees using Google services, might purchase Chromebooks. “There’s an upside for Chromebooks, but not for 2016 because what they can do is pretty low and the market’s just beginning,” Huang said.

The Chromebook 13 “could be an alternative thin-client notebook tied to HP’s thin-client efforts, but HP Inc. isn’t in the server business anymore. That’s taken up by HP Enterprise, and thin clients are more of a server/enterprise offering,” Enderle noted.

It “isn’t competitive even with HP’s own notebooks or in markets where existing Chromebooks sell,” he said. “This is a product in search of a market.”