IBM on Thursday announced a software ecosystem tailored for what in essence amounts to a computing architecture that works like the human brain.

It supports the programming cycle from design through development, debugging and deployment.

The software ecosystem is the fourth phase of the Systems of Neuromorphic Adaptive Plastic Scalable Electronics, or SyNAPSE, project, a multimillion-dollar, years-long effort funded by the United States Defense Advanced Research Projects Agency.

SyNAPSE was launched in 2008 with the participation of IBM Research; HP; and HRL Laboratories, Hughes Aircraft’s research arm.

IBM’s not alone in researching this field. Neuromorphic engineers are conducting similar research in Europe, and several companies are also developing neuromorphic chips. Then there’s the so-called Brain Initiative announced by President Obama earlier this year, and the EU’s Human Brain Project. Earlier this month, Japanese and German researchers carried out the largest general neuronal network simulation to date.

The program’s success “is likely to prompt academics to make dramatic changes to many of their current technology curricula,” Hayes suggested.

What the Buzz Is About

IBM researchers developed a number of breakthroughs to enable the new architecture, which they call “TrueNorth.”

They created a multithreaded, massively parallel, highly scalable functional software simulator of a cognitive computing architecture consisting of a network of neurosynaptic cores. 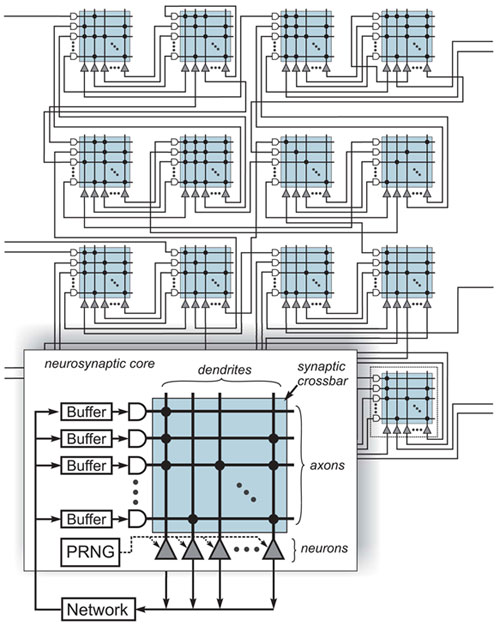 TrueNorth is a brain-inspired chip architecture built from aninterconnected network of lightweight neurosynaptic cores. TrueNorthimplements “gray matter” short-range connections with an intra-core crossbarmemory and “white matter” long-range connections through an inter-corespike-based message-passing network. TrueNorth is fully programmable interms of both the “physiology” and “anatomy” of the chip, that is, neuronparameters, synaptic crossbar, and inter-core neuron-axon connectivity allowfor a wide range of structures, dynamics and behaviors. (IBM Research)

The researchers also created a simple, digital, highly parameterized spiking neuron model, or corelet, which will support both deterministic and stochastic neural computations, codes and behaviors.

The corelets are reusable building blocks that function as black boxes, with their inner workings hidden from programmers. They can be combined to produce larger, more complex corelets. These features will be familiar to users of object-oriented programming.

Each corelet represents a complete blueprint of a network of neurosynaptic cores that specifies a base-level function. Think of them as DNA molecules. There will be 256 of these corelets in each core of the simulated neurosynaptic computer.

A library is essential for any programming language, and the IBM researchers have created one with more than 150 corelets.

IBM also developed a teaching curriculum spanning every aspect of TrueNorth. This includes an end-to-end software environment that can be used to create corelets, access the library, and experiment with software on the simulator, among other things.

IBM did not respond to our request for further details.

What SyNAPSE Is Good For

SyNAPSE “ties in to Big Data and its effects across a broad range of [IBM’s] Smarter Planet initiatives,” Wayne Kernochan, president of Infostructure Associates, told TechNewsWorld.

Other players are also working to develop chips that simulate the human brain’s workings.

Massachusetts Institute of Technology researchers have designed a chip with 400 transistors that mimics how the brain’s neurons adapt in response to new information.

Intel has come up with a theoretical design that involves wiring up multi-input lateral spin valves and memristors into a cross-bar switch lattice to create a neuromorphic CPU. This can be done with existing semiconductor technology.

Interest in neuromorphic engineering is growing because “the technology has reached a point, at least with IBM, where it can be translated into products,” Rob Enderle, principal analyst at the Enderle Group, told TechNewsWorld.

“You get systems that can make intelligent decisions at computer speeds and alter their programming based on real-time events,” Enderle observed.

“In effect, the systems are becoming smarter at an accelerated rate, so what you buy will improve itself over its lifecycle,” he eplained. “This kind of system could move through the industry like a virus, replacing competing gear but being largely immune to being replaced because of its deep unique logical ties to the company and business.”