There’s an old rather funny movie called The Mouse That Roared. Basically, it is about a little no-name country that decides to go to war with the U.S. and lose, so that the U.S. will pay it reparations. Only it somehow wins, to everyone’s surprise.

It isn’t clear whether Donald Trump declared war on Silicon Valley or the other way around — it is hard to keep track of the folks Trump is at war with — but the mismatch should be equally massive.

Trump has millions invested and is at war with his own party. He is a master of social media (mostly Twitter), but he is pitched against the folks who own search and advertising, own most of the platforms people live on, own Twitter and Facebook, and are in bed with both parties.

They literally could kill his Twitter ID and block every mention of his name unless it came from someone referring to him either as an idiot or a criminal. So why is Trump winning?

I’ll dig into that phenomenon this week and close with my product of the week.

If I were to write a fictional book about a person who was an expert at using a weapon going against the nation that made it and winning, I’d likely have to give that user super powers.

I actually think it would be a fun book to write, but the odds that one person using the tools developed and sold by a massively powerful and far better-funded entity could win would simply be too hard to believe, unless the hero were related to Superman. (Even Batman made the weapons he used, and he too is fictional, unfortunately).

I don’t think Donald Trump is a better Batman than Batman, but I have a hard time explaining how the Silicon Valley can be at war with him and losing otherwise.

Back in 2012 I argued that Google had reached a level of influence that was powerful enough that it could play a significant role in influencing who was elected. I still believe that a combination of Google’s influence, along with a mismatch of analytics skills between Obama and Romney, was what created the result.

Researchers recently validated this premise, suggesting that if an election were close, that Google alone could decide the winner.

It appears, on paper, that Google clearly has the ability to own the U.S. presidency, which likely explains why the current administration and Google are so close.

Yet, with Trump effectively losing all his TV shows and the new host endorsing the guy I’d like to vote for, with the traditional new loving to hate him and the comedy programs making fun of him, he controls his presence only on social media.

Social media, technically, controls Donald Trump’s image. They could push unflattering comments and bury flattering ones. They could create discussion threads focused entirely on Trump’s failures, and make famous those that profess to know or believe crazy but scary things about the guy. For example, they could promote the site that seems to imply that Donald Trump is a Nazi alien from outer space.

As a side comment, that actually could be the plot for a sequel toIron Sky (which basically places Sarah Palin as president fighting Moon Nazis). Though, you know, in the trailer for the actual coming sequel there is a T Rex giving the Trump pledge, and the movie kind of explains the whole Sarah Palin thing. Life imitating art or art imitating life?

Back to Silicon valley executives. They even have the power to accidentally give access to Trump’s account to a crazy person — though it strikes me there would be times when we might not be able to tell the difference — and completely obscure him behind an unflattering image. Though, come to think of it, that kind of seems to be happening now and he seems to be getting more popular. Hmmm…

The Role of Analytics

One of the most masterful parts of the Obama vs. Romney campaign was how Obama’s technical team out-executed Romney’s to a massive degree. This is covered in some depth in John Scully’s new book Moonshot! There is no evidence that Donald Trump can even spell “analytics,” let alone use these tools, and the folks who actually created them and the data scientists who know how to use them are mostly in Silicon Valley!

They could simply volunteer their time for any of Trump’s challengers, and if either of Obama’s campaigns is any measure, the result should wipe out any chance that Trump might have of winning.

The way it works is this: The analytics tell you what is resonating; how to approach people with individual granularity to change their minds; and even what forms of media are most influential. The end result is a highly targeted campaign that likely could get my dogs elected.

Wrapping Up: Soooo… Why Is Donald Trump Winning?

All I can say is that it appears the CEOs of these tech companies simply aren’t willing to use the tools they have against Trump. Maybe he is too good a customer, maybe they are afraid of retaliation — the guy isn’t known as being very forgiving. (However, with the secret meeting being not that secret, I expect that horse is out of the barn.)

The guy is likely to be both pretty pissed at the folks in the Valley and looking for payback if he gets elected so, given it looks like they declared war, they might want to step up and actually fight it.

Then again, Trump could be Batman. Think about it: a rich goofy guy who is secretly very competent and nearly unbeatable. All he’d need would be someone to build him a Batmobile. Oh crap…

Yes, I know this car isn’t going to be announced until the end of the month, and won’t be available until next year. The SUV version I’m likely to buy won’t make it till around 2018 — but I don’t care, I’m making the Tesla Model 3 my product of the week.

The reason for this is that both the Tesla S and Tesla X are way the hell too big for me, and as bad as I want a Tesla, I’m not buying an electric bus no matter how good it looks and how fast it is. I want something I can actually find a parking space big enough for.

Given that electrics still aren’t at critical mass, the Tesla Model 3 — with a price in the US$40K price range, plus decent performance and decent battery life — is an electric car far closer to something everyone can afford, that still could spank a number of high performance cars off the line.

If this diagram of the car is accurate, it looks like either the design of the new car came out of Musk’s SpaceX, or the famous design team of Popkiss and Beaker, and it showcases the risks of announcing anything around the 1st of next month. 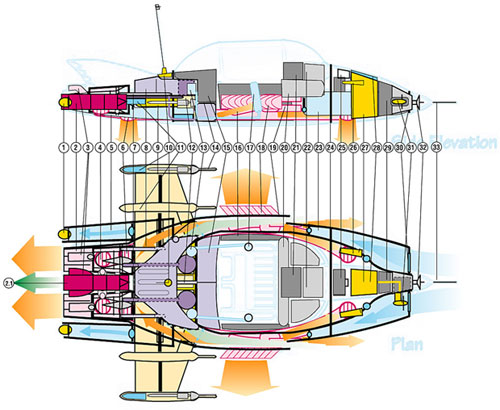