Is the iPad an iFad? 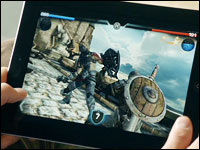 You might say “all pads, all the time” has been the theme of the past week or so, what with the splashy debut of Apple’s second-generation contender. Indeed, by many accounts, the new iPad 2 is truly the best thing since the proverbial sliced bread.

While the limelight has been focused squarely on Cupertino, it’s become plainly evident that not everyone has sipped the iKoolAid yet. Early reactions to the new device have been decidedly mixed, in fact — particularly when it’s held up in the clear light of day against Motorola’s Android-powered Xoom.

It’s been just a little over a year since Linux Girl last raised the “pad” question with Linux bloggers, who were noncommittal at best back then. Now that we’re on to the next iteration, she couldn’t resist checking back to see if their opinions have changed.

“I have no plans to purchase an iPad because I don’t want to buy a product that is intentionally closed so that I can only buy manufacturer-approved applications,” asserted Chris Travers, a Slashdot blogger who works on the LedgerSMB project.

“However, I tend to be fairly conservative when it comes to new technology,” Travers added. “The industry is still figuring out what good tablets are, how to design an optimal user interface, and where they might actually be helpful for real work.

“Until the market matures, they are basically very expensive toys,” he concluded.

Similarly, “I don’t see myself buying a tablet any time soon — not when I can get a laptop with 4x the memory, 4x the cpu, and 20x the storage for less,” noted Barbara Hudson, a blogger on Slashdot who goes by “Tom” on the site.

“On the other hand, I can see how others would find it appealing — not just in a ‘look at my neat toy’ kind of way, but for single-use mobile applications such as order taking or inventory,” she added.

Indeed, “I think they are just another fad like eReaders were a couple of years ago,” Slashdot blogger hairyfeet agreed.

“The thing is too big to drop in a pocket like a cell, yet doesn’t have the power of a netbook,” hairyfeet explained. “The only real niche I see for these things is industrial and medical, where it makes a handy electronic notepad for taking inventory or updating a patient’s chart.”

“Tablets are consumer-oriented,” he pointed out. “Producers of content will always prefer something with a keyboard. Even now we see several products combining a smartphone with a notebook as a dock.”

“Such products will be about the same price as a tablet eventually and combine all the best features of smartphones, tablets and notebooks — a serious competitor to a tablet,” Pogson added. “Companies like Apple may start fashions in IT, but they cannot hold the result as a cash-cow forever.”

As for Apple’s device in particular? “Maybe in a couple of years the iPad4 will match the current Motorola Xoom, though I doubt we’ll ever see support for Adobe Flash on the iPad,” Hudson opined.

In the meantime, “one good thing about all the iPad hype is that it’s creating interest for tablets in general and forcing competitors to get ahead of the curve,” she added.

The iPad 2 “seems like a nice iteration, but nothing amazing,” Hyperlogos blogger Martin Espinoza opined. “It does include some pieces of hardware which ought to have been on the original, so that will be a nice cash bump for Apple as the diehards upgrade.”

Waiting for a Desktop Replacement

For his part, Espinoza is “still waiting for a cheap, powerful tablet which can function as a low-end desktop replacement,” he added. “I plan to dock it in the living room and use it to play video (hopefully via XBMC) and then be able to take it to the car and use it for navigation as well.

“Only my flakiest netbook has 1080p output, and none of mine really have the horsepower to be a media player since they’re all single-core,” he pointed out.

‘Apple Will Not Sell as Many’

Looking ahead, “the domination of the tablet market by Apple will end this year with the tuning of Android for tablets and the large number of competitive manufacturers,” Pogson predicted. “Apple has locked up the supply chain, but there is still enough product outside Apple’s supply chain that Apple will likely drop to about 60 percent share of units shipped in 2011 and less than 50 percent in 2012.”

Apple may release one new version per year, but “the world can produce dozens at lower prices and with better performance,” Pogson added.

While some iPad owners will undoubtedly buy an iPad 2, “most will not,” he added. “The idea of changing computers annually is silly. Apple will not be able to sell as many units as they did in the first year of the iPad.”

Android, meanwhile, “will be available on many units around (US)$200 — less than half the price of the iPad this year,” Pogson predicted.