It’s All About the ‘Experience’

Service providers, much like people, react to change in different ways. The Chinese word for “crisis” embodies two characters — one means “danger” and the other “opportunity.” The smart way for service providers to handle the current changes is to identify the dangers and seize the opportunities. Especially at this early stage of the game, when consumers are fairly neutral in their service-provider preferences for value-added services, it’s incumbent upon the carriers to act quickly. 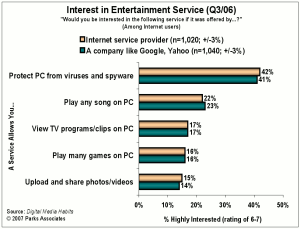 The new market conditions require service providers to use these advantages to become something new (at least for them) — experience brokers, advisors and intermediaries.

On the one hand, they need to aggregate different applications and experience-oriented services to fit a particular consumer’s needs, and on the other, they need to aggregate and segment consumers based on their varying proclivities and lifestyles for application and content providers who want to sell their differentiated products to these customers.

Companies in other consumer industries are beginning to think along the same lines. Rob Clasen, CEO of Starz Entertainment, once remarked that his company was not in the cable TV business but the business of audience aggregation. Such a difference, though subtle at a first glance, could help shape a service provider’s strategy and tactics.

Service providers need to build their strategies based on fundamental consumer needs. Increasingly, they’ll have to offer personal services instead of household services. Consumers already have their personalized playlist on their iPods and personal ringtones on their mobile phones. Soon they will ask for personalized TV channels and TiVo recommendations, and IP convergence and advancements in machine-to-machine communications have made these scenarios possible. Consumers will use their mobile phones as personal gateways, which will know their preferences and align other entertainment and communication devices to their needs.

Another Look at Tactics

Given this scenario, service providers need to reevaluate their tactics. Take video as an example. Most service providers still market their TV and mobile video services separately. Most also operate an Internet video portal. For instance, Verizon has FiOS TV, V-Cast video and Verizon online video. Verizon needs to group these services under one umbrella. Consumers should be able to choose not only what kinds of videos and channels they want but also on what platforms they will watch these videos. The platforms and networks suddenly become transparent to the consumer.

On the other hand, when a carrier negotiates with content providers, it can offer to carry their content on an all-encompassing video platform, instead of separate TV, Internet and mobile platforms. When a carrier sells to advertisers, it can tell them not only who are its video viewers but also when, where and how they view the video content. This day will come sooner rather than later, and service providers need to prepare for it.

Yuanzhe (Michael) Cai is director of broadband and gaming for Parks Associates.
Get Permission to License or Reproduce this Article

Who Will Win the 4G Race?