I watched in horror last week as Tesla’s CEO Elon Musk attempted to turn a New York Times reporter into the next Ralph Nader and kill his company. It brought back memories of the ChevroletCorvair that died as a result of GM’s decision to fight what turned out to be false allegations instead ofjust making the car better.

Sadly, even though they made the improvements, folks walked away from thecar because they believed it to be unsafe. Technology transitions are painful, and moving from horses tocars in the first place wasn’t easy either — not helped by the fact that there were three core technologiescompeting for that next version of personal transportation a century ago: gas, electric, and steam.

I’mnot expecting steam to come back anytime soon, but in a head-to-head battle, gas did win a century ago,and it is still the most efficient of the fuel sources — just not the healthiest or the most politically correct.

I’m actually a fan of electrics, but I have little doubt they will fail unless something significant is donesoon to change the balance of power — and get Tesla’s CEO to shut up.

I’ll recap our progress from horses to gas cars to electrics and close with my product of the week: a nicelittle tablet from Lenovo that business apparently likes better than the iPad.

I grew up with horses. One story that has stuck with me was about a caretaker we had on Catalina Islandwho used to drive into town on Friday nights and get plastered. He’d then get back on his horse and itwould get him home. To move him into the 20th century, the company bought him a jeep and retiredthe horse. So he drove it to the bar and awakened later thatsame night (he’d passed out while driving, as usual) with the front of the jeep hanging off a cliff. He never drove it again.

Horses had a numberof huge advantages. They didn’t need roads; they were self-driving (not a lot of collisions on horses); there werevirtually no traffic jams; and they ran on hay. Granted, there were the dual problems of methane gasand horse poop, but both are pretty environmentally safe. (I’ve got a funny story about my wife, a horse andflatulence that she won’t let me tell here.)

Plus, you could grow your own horse if you had a stallionand a mare. (That said, riding a stallion when a mare is in heat — or riding a mare being chased by a stallion — is something you don’t have to deal with in a car.)

Horses back then were cheap and didn’t need much of an ecosystem. You could generally justpull off the trail and let them drink from a spring or eat the local grass. They were good for about20 years if you took care of them.

Compare that to an automobile. Cars tend to get expensive afterabout five years; they are filled with toxic materials; you have to buy gas; they generally require roads; and few can or would ever want to build one.

Oh, and if you’re in a riding accident, there is a pretty goodchance the horse will come over and help you get to safety. If you’re in a car accident, you might need the “jaws of life” to get you out.

Granted, with horses you’re out in the weather, but think of the bar the first cars had to overcome. There weren’t many gas stations, and the things were loud, difficult to keep in repair, expensive and relatively unsafe. (Try to stop a car at 30 on dirt — then do the same with a horse).

Early cars were aboutas sheltered as a buggy or horse-drawn coach, and virtually none of the skills you learned with horsestranslated to cars. They were few in number, and folks lusted after the status they provided.

Today we have gas cars and not horses. Looking back and thinking of all the traffic, roads,pollution, and other petroleum-related problems, I wonder if we were all that smart to take this step.

Electric vs. Gas: Petroleum Has the Power

Compared to the shift from horses to cars, electrics replacing gas should be a walk in the park. Roads, garages, and much ofthe driving infrastructure can be used by both. We can surmise that the initial reason gas cars replacedhorses, prior to the ecosystem for gas being created, was initially status — because early cars were kind of stupid.

Then it became less about status and more about economics. The massive automotive industry was far better funded than thedistributed horse industry, and money generally rules. GM at one point bought up most of the light rail systemsin the country and dismantled them between 1936 and 1950, so that cars would be sold in cities. We’ve spent the last decade or so trying to restore light rail.

Electric cars do impart status; however, the money remains with the gas industry. I imagine that ifRomney had won rather than Obama, then most of the electric subsidies would have evaporated — much like the solarsubsidies evaporated after Jimmy Carter left office — and Tesla would be on life support.

Like gascars, electric cars need a unique ecosystem. Because batteries charge more slowly than gas can flowinto tanks, charging needs to be more — not less — pervasive. The ideal situation likely would be inductivecharging grids near freeways and at parking spaces automatically metered and charged to drivers.

Oncein place, rather than having a fueling disadvantage, electric cars would have an advantage, because as long as you remained in the ecosystem, you’d never have to worry about refueling — well, at least until you got your monthly car power bill.

Here’s the deal though, with the hay-to-gas transition, the farmers weren’t organized and couldn’t fight Standard Oil — because it was arguably more powerful than the federal government at the time.

Making the transition from gas to electric will be different. Electricity is generally provided by utilities, which are regulated and don’t havea lot of extra capital, while petroleum remains one of the most powerful and well-funded industriesin the world.

Unless there is some significant financial offset to cover the building of the needed electrical infrastructure, the petroleum industry likely will be successful in keeping electricity from replacing gas. Should a Republican win the presidency, electrics are likely to die out again.

Tesla’s major problem isn’t that it is competing with GM or Ford, which is bad enough, it is thatit is effectively competing with the petroleum industry (list of columns), and the only thing keeping it in the gameis a largely dysfunctional U.S. government split on the idea of electric vehicles.

Electrics are potentiallycleaner, safer and certainly quieter, but so were horses — and they got kicked off the island even thoughthey were initially the dominant form of travel.

The New York Times reporter that Tesla is trying to turn into Ralph Nader is a guy who appears tospecialize in covering petroleum. He was never going to be a champion of electrics, and the failure wasn’t his — it was a review program that didn’t take his obvious bias into account whengranted or staffing the review.

Just as Top Gear — one of my favorite shows — panned an earlier Tesla, folks used to reviewing gas cars are likely to define tests that showcase an electric in its worst light. Like that caretaker with the jeep, they probably aren’t on the short list to buy one anyway.

What’s sad is that it appears the NYT article is badly flawed. Then again, it may not be — no shortage of controversy — but by pounding on it much the way GM did Nader, it is getting wide play and likely scaring buyers away from the car.

If you were to read the last two articles, you’d likely pass onbuying a Tesla, and both resulted largely from Tesla’s dispute rather than from the NYT article itself.

Figuring out a way to overcome the petroleum industry and a century of gas car dominance — and keep theCEO from accidentally torching the company — are Tesla’s big problems. If it can’t solve them, I doubt it’ll makeit, no matter how wonderful its cars are.

The ThinkPad Tablet 2 is Lenovo’s professional answer to the iPad and it contains the latest version of Intel’s answer to anARM processor, the Atom. That means the product runs full Windows 8 and not Windows RT, makingthe US$679 base price for the recommended 64-GB version without 4G support — that support jumps you it to $949 — rather attractive. 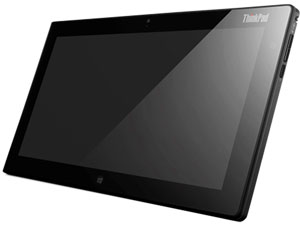 There is an optional Bluetooth Keyboard that provides near ThinkPad keyfeel, and it has a HD five finger IPS touchscreen. Battery life approaches nine hours, which is in line withthe latest iPad, making this one of the best business oriented tablets I’ve ever carried.

In comparing the Surface Pro and ThinkPad Tablet 2, I think the ThinkPad actually comes significantlycloser to the iPad target. It clearly doesn’t have the power of the Surface product, but it is in line with theweight and battery life folks now expect from a tablet.

I’m a long time ThinkPad fan. ThinkPads have alwayshad the best keyboards and quality, and this new tablet is in line with what I expect from them, so it’s anobvious product of the week.