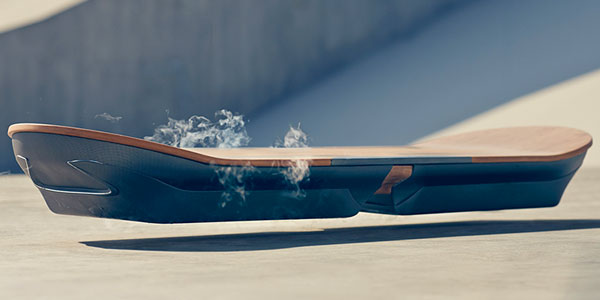 Some said it could never be done. Some said it would be at least another half century before someone could develop an actual hoverboard. However, Toyota on Wednesday announced that a division of its Lexus arm has built a prototype of a hoverboard, one that truly leverages magnetic levitation.

Superconductors, cooled by liquid nitrogen, and permanent magnets give lift to what Lexus billed as one of the most advanced hoverboards ever constructed.

Natural bamboo and a spindle grille give the hoverboard what the company described as a “uniquely Lexus” look.

It took the collective genius of several top experts in the sector of superconductive technology to conceive and fabricate the Lexus Hoverboard, the company said.

Lexus and its partners regularly challenge themselves to push the boundaries of modern technology, and the Lexus Hoverboard is one such example of that, said Mark Templin, executive vice president at Lexus International.

“That determination, combined with our passion and expertise for design and innovation, is what led us to take on the Hoverboard project,” he said. “It’s the perfect example of the amazing things that can be achieved when you combine technology, design and imagination.”

As thrilling as the hoverboard may appear, it isn’t for consumers, said Lexus spokesperson Leigh Ann Session. It’s just a prototype for collaboration among Lexus and its partners.

The Lexus Hoverboard is “nothing anyone is ever going to be able to buy,” Sessions told TechNewsWorld. “It’s not intended for anyone in particular. It’s part of a campaign that we are filming called ‘Amazing in Motion.'”

The Lexus Hoverboard’s reveal is a teaser for the next installment in the campaign, she said.

Although the prototype has virtually no chance of hitting consumer markets, the innovative tech Lexus has poured into the futuristic hoverboard could be used by third parties or the company itself down the line.

Lexus isn’t the only company experimenting with hoverboards. Also, with an impending peak car crisis ready to crush roadway transit, maglev trains are one of many transportation solutions governments are adopting and attempting to improve.

Even the U.S. military has been experimenting with maglev and has built a platform based on the technology, noted Jim McGregor, Tirias Research’s founder and principal analyst.

Maglev products can be compared to drones — that is, hardware that was available only to the military before being affordable enough to be embraced by consumers, he suggested.

“I think it’s almost inevitable that — whether it’s for military and first responders or just for consumer applications — eventually we’re going to see some of these products hit the market,” McGregor told TechNewsWorld.

Maglev products are expected to hit various markets within the next 10 years. However, It’s highly likely, based on the speed of technology, that it will take roughly half that time, McGregor suggested.

While a hover platform or hover bike could have more use cases than a board, a hoverboard could perhaps find its niche.

“I don’t think that we have a single form factor yet. We’re still playing with the technology. But if it does take on a board-level form factor, I think it could find a place in sports,” said McGregor.

“I think also it could have a place in personal transportation,” he said. “Maybe this is the next generation of the Segway.”