Wireless carriers sell you “postpaid” contract phones at a considerable discount. The carrierexpects to recoup its outlay — the full price of the equipment — over the life of the contractthat you sign.

Often, it will lock the equipment to its network through a technique that stopsthe phone working if the SIM (Subscriber Identity Module) card ID and the phone serialnumber, aka “IMEI number,” don’t match what’s configured. The SIM card is theelement that identifies you on the network.

This is done so that you can’t use the phone on other networks. SIM locking andthe signed contract provide double protection for the carrier, ensuring that it gets its money back.

Radio technology GSM (Global System for Mobile Communications)-driven devices canbe unlocked, though, and used on other networks that also use GSM radios.

Unlocking a GSM device allows you to use pay-as-you-go, or prepaid, SIM cardsfrom other carriers. Prepaid accounts can work out cheaper than postpaid accounts, becauseeven though the per-minute charges can be higher, there’s no monthly commitment.

The phone equipment is yours — you’ve paid for it. You can ask your carrier to unlockthe equipment once you believe it has recouped its investment in it. Or, you can unlockit yourself if your carrier is dragging its feet, because requests can take up to two weeks to becompleted.

Tip: AT&T, T-Mobile and others use GSM SIM cards. Sprint and Verizon don’t usethem; they use a different radio technology called “CDMA” (Code Division MultipleAccess) that can’t be unlocked using these steps.

Remove the battery from the phone, and look for a SIM module. Apple’s iPhone SIMcard is located in a drawer in the side of the phone. Insert a paperclip in the pinhole andthe SIM card will pop out in a tray. 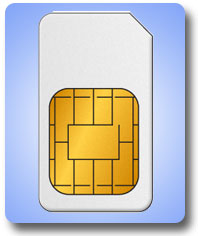 Remove the existing SIM card by sliding it out.

Purchase a pay-as-you-go SIM card from a GSM network like T-Mobile or anMVNO (Mobile Virtual Network Operator) like Locus H2O Wireless, which uses the AT&T network.

T-Mobile SIM cards are cheapest when ordered on the T-Mobile website. H20 SIM cardscan be purchased at 7-Eleven and Best Buy stores.

Punch out the new SIM card from the cardholder and insert it into the phone.

See if the phone registers with the new card by looking at the screen. If registration issuccessful, the network name should appear momentarily on the phone’s display. Forexample, “T-Mobile” should appear.

Tip: H2O requires that you activate service — by following the steps below — beforeinserting the SIM card into the phone.

Activate the SIM card. Look for specific instructions that came with it andfollow them. You’ll need the 15-digit IMEI number from under the phone’s battery orfrom “Settings” in the phone’s software.

Tip: The prepaid carrier usually provides the option of activating via a toll-free number,or website. Pick a plan if prompted — for example, “Pay by the Day” or “Pay by theMinute.” Then add funds to the account using the same tools.

Allow up to two hours for the activation to complete, and attempt a test call. If the call issuccessful, the phone is ready for use.

Getting Your Carrier to Unlock Your Phone

If you’re unable to use a prepaid SIM card from another carrier in your device byfollowing the previous steps, you will need to ask the carrier the device was originally configured to work on to unlock it.

Find the account number, phone number and IMEI number of the device you need tounlock. The IMEI number is under the battery or within “Settings.”

Verify that you don’t owe the carrier any early termination fee or have any outstandingbalance due, and that the phone hasn’t been reported lost or stolen.

Then contact the carrier and ask it to unlock the phone. T-Mobile provides a code. Othersperform the unlocking remotely on servers.

AT&T requires that you complete any term agreement to unlock its iPhone. T-Mobile will provide an unlock code that it calls a “subsidy unlock” if you’ve had 40 days of postpaid service and haven’t requested an unlock code in 90 days.

Different conditions come into play if you’ve paid full price for the phone, or are already a prepaid customer. Check with the carrier.

Unlocking the Phone Without a Carrier’s Involvement

If the previous steps fail for any reason, you can unlock the phone yourself by payingfor an unlock code from an independent vendor. The vendor uses the IMEI number togenerate the code. Phones previously reported stolen or lost can’t be unlocked like this.

Scroll down the initial Unlockapedia Web page for a listing of unlocking services,including ratings and user reviews.