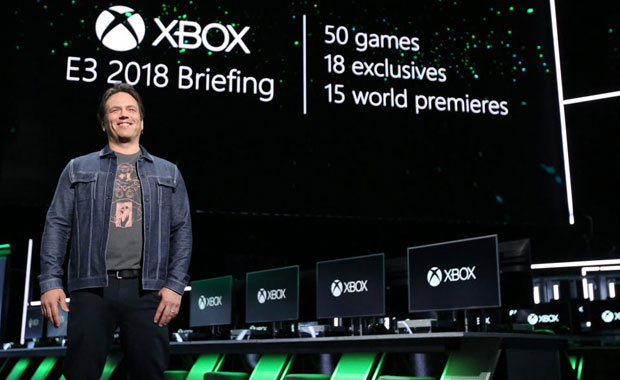 Microsoft made a big splash at the Electronic Entertainment Expo in Los Angeles with its announcement of more than 50 games for its Xbox One gaming console.

Among the games unveiled by the company were 18 designed to run exclusively on Xbox, including Forza Horizon 4, Halo Infinite, Gears 5, Session, Below and Ashen.

Microsoft also offered the more than 6,000 people on hand at its E3 presentation on Sunday peeks at major titles to be released next year — many enhanced to run on Xbox One, including Fallout 76, Tom Clancy’s The Division 2, Kingdom Hearts 3, Devil May Cry 5, Battlefield V, Metro Exodus and Shadow of the Tomb Raider.

The company also made some additions to its streaming game service Game Pass. They included Forza Horizon 4, Fallout 4, Tom Clancy’s The Division and The Elder Scrolls Online: Tamriel Unlimited.

“We’ve been thrilled to see the positive impact Xbox Game Pass is having on the gaming ecosystem, including increasing the number of titles gamers play nearly 40 percent, and increasing gameplay hours by almost 20 percent,” said Mike Nichols, chief marketing officer for gaming at Microsoft.

In addition to debuting more than four dozen games, Microsoft demonstrated its commitment to producing exclusive content for the Xbox. It revealed plans to create a new game development studio, called “The Initiative.” The company also announced its acquisition of Playground Games, and unveiled letters of intent to acquire Ninja Theory, Undead Labs and Compulsion Games.

“Microsoft’s moves could be interpreted as signaling that the company’s platforms aren’t attracting as much developer attention as the company would like,” said Charles King, principal analyst at Pund-IT.

“Acquiring known studios and bolstering its own internal development efforts are ways to address that issue,’ he told TechNewsWorld.

“Most would agree that Microsoft has lost the exclusive title battle with Sony,” remarked Eric Abbruzzese, a senior analyst at ABI Research.

“These acquisitions are a great step to rectify this, although it probably should have happened sooner,” he told TechNewsWorld.

Microsoft’s acquisitions were a good move for the company, said Michael Goodman, director for digital media at Strategy Analytics.

“They bought some solid studios with solid IP that will strengthen them for this generation and into the future,” he told TechNewsWorld.

“Those purchases show that the company is committed to making exclusive titles to make the Xbox competitive with the other consoles in the market,” noted Rob Sanfilippo, an analyst with Directions On Microsoft.

“Supporting titles available on other consoles hasn’t given Xbox any extra success because PlayStation 4 is very popular and lower-priced in most cases,” he told TechNewsWorld.

“That’s why it’s important for Microsoft to emphasize it’s going to have more exclusive titles,” he said.

“The bottom line is that exclusivity is a key driver of hardware sales,” Lewis Ward,research director for gaming at IDC, told TechNewsWorld.

“The Xbox One is the best platform on the market from a sheer hardware standpoint,” he told TechNewsWorld.

Sony isn’t expected to bring its next-generation gaming console to market until 2022, which gives Microsoft a large window to beef up its developer pipeline.

“Microsoft has the best-performing hardware and graphics,” Vena said. “Developers eat that up. They love that kind of headroom, especially in graphics performance, so they can build better games.”

For Xbox fans, Microsoft’s presentation demonstrated the company’s commitment to gaming, something that hasn’t always been obvious with the Xbox One.

“The initial launch of the Xbox One was mired by a focus on gaming periphery — social, video and other stuff,” ABI’s Abbruzzese recalled.

“The company has been working to move that focus back to gaming, and this year’s E3 was the product of that work,” he said. “The hardcore gaming crowd always prefers less marketing BS and more content, and so that’s what Microsoft did.”

Microsoft is trying to become the Netflix of console gaming, Moor’s Vena suggested.

Up to now, streaming game services have largely offered older fare. Microsoft is poised to change that model for its Game Pass streaming service.

“Microsoft is bundling a number of first rate titles into its Game Pass subscription,” Vena said.

One of the barriers to getting first-rate content for streaming services is the concern of developers that streaming a game will cut into single copy sales, where they make most of their money.

“Microsoft says that GamePass is additive, not cannibalistic,” Strategy Analytics’ Goodman noted, but “we’ll see. If I’m a publisher and a game is being sold for (US)$60 at retail, then any licensing fees from streaming will have to make up for lost retail sales.”

Bandwidth can be another obstacle to streaming.

“If that’s true, that is a good penetration rate for such new services,” Ward said.

Nevertheless, gaming consoles, as a platform, aren’t going away any time soon.

“There will be an Xbox One console for many years to come, possibly even another generation,” Directions On Microsoft’s Sanfilippo predicted.

After a downturn in 2014 and 2015, the console market has begun to bounce back in recent times.

“Part of that resurgence had to do with Microsoft refreshing its hardware,” Vena said.

Console games sales will grow from $29 billion this year to $33 billion by 2022, with digital games representing well over half of this by 2022, Juniper Research has forecast.

While the Xbox One has done well in North America, Microsoft has seen the console outsold effectively 2:1 by Sony’s PlayStation 4 on a global scale, noted Lauren Foye, a gaming analyst with Juniper.

“Part of the issue here has been a lack of console exclusives,” she told TechNewsWorld. “Hence Microsoft’s recent drive to acquire games studios and create new titles.”