Verizon Wireless announced Thursday that it will release its first Windows 7 smartphone, the HTC Trophy 7, for sale online May 26. 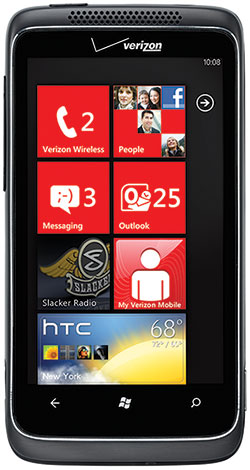 The Verizon Trophy from HTC

This is the another smartphone in Verizon’s lineup emphasizing its gaming capabilities in Verizon Wireless’s lineup. The Sony Ericsson Xperia Play hits retail shelves May 26.

Putting the focus on gaming, Verizon Wireless announced that consumers who buy an HTC Trophy 7 before July 15 will get a free Xbox 360 console game.

“They’re really pushing the Xbox feature, and that sounds to me like they’re going for the male teenager-to-30-something gaming user,” Ramon Llamas, a senior research analyst at IDC, told TechNewsWorld.

“With its iPhone launch and now the launch of Windows Phone 7 handsets, Verizon is trying to appeal to a younger demographic,” Dmitriy Molchanov, an analyst with the Yankee Group, suggested.

“We’re giving customers more options, and with the HTC Trophy, customers who want a Windows Phone 7 smartphone, access to Xbox Live, the ability to edit Microsoft Office documents and more now have a device to do all that while on the Verizon Wireless 3G network,” Verizon Wireless spokesperson Albert Aydin told TechNewsWorld.

Snuggling Up to the HTC Trophy 7

The Trophy 7 weighs just under five ounces with a battery. It has a 3.8-inch 480 by 800 WVGA touchscreen with pinch-to-zoom capability.

It is about 4.7 inches long, 2.4 inches wide and half an inch deep. The smartphone comes with a 3.5mm stereo audio jack and has a standard micro-USB slot.

Sensors include a digital compass, a proximity sensor and an ambient light sensor.

The HTC Trophy 7 is pre-loaded with HTC Hub, which offers access to weather and stock reports, a photo enhancer, a sound enhancer and other features. The device has a Pictures hub that lets owners see photos from their camera as well as their Facebook and Windows Live accounts.

The Trophy will sell for US$149 with contract. Owners have to pay $29.99 per month for Verizon Wireless’s unlimited data package. The carrier doesn’t charge fees to access Xbox Live on the HTC Trophy, Aydin stated.

Overall the HTC Trophy 7 might not qualify as a top-line, figurehead smartphone.

For example, there’s no indication on HTC’s website that the device’s memory can be expanded with memory cards, a feature available for some time in other smartphones.

Further, it has only a single-core processor, whereas many of its high-end competitors have dual-core processors, the Yankee Group’s Molchanov pointed out.

Also, the HTC Trophy 7 only has one camera, whereas most other high-level smartphones have two.

“Unless you have a really cool app on board that leverages the camera, it’s just a camera,” IDC’s Llamas said. “It’s nice to have HD video recording but where are your bar scanner and augmented reality capabilities? These depend on the camera,” he elaborated.

“I’d have to agree the hardware specs lag those on other phones,” Molchanov remarked.

“I’d focus a little more on the fact that this is Verizon’s first Windows Phone 7 smartphone,” Molchanov said. “It will add diversity to their portfolio and will attract younger demographics.”Girls and Boys, Come Out to Play

The HTC Trophy 7 is not the only smartphone offering access to Xbox Live. HTC’s other WinPho7 smartphones also do this, Molchanov pointed out.

“It looks like Verizon’s trying to segment their user base more,” IDC’s Llamas said.

“Gaming’s very popular, behind SMS texting and social apps, and if you’re going to have something beyond the entry-level gaming stuff like ‘Angry Birds,’ go for the hardcore gamers who want to spend more money on the device, the games, and probably on data. This is going to be the way to best serve that segment of that population,” he added.

However, he currently has no data on just how many smartphone users are hard-core gamers.