Microsoft vs. Google: Chasing Butts While Running From Risks

This is just one part of a dynamic that seems to repeat itself over and over again, though. Another is the willingness to take risks. Google can’t seem to find a risk it isn’t willing to take (with little success but little overall damage), whereas Microsoft these days is defined as a company that is unwilling to take risks, with little in the way of breakout successes.

I’ll share my thoughts on both things and close with my product of the week: a not so smartwatch that does an excellent job of measuring heart rate.

There is a recurring pattern in the technology market: A dominant competitor focuses so much on another firm that it misses the next technology wave that is a far greater threat. This came up during a conversation I had last week with a reporter working on the Ballmer years at Microsoft. A number of the mistakes made under his watch — and Bill Gates’ — resulted from their excessive focus on a competitor, which caused them to miss the next wave.

However, Microsoft is hardly the only company that has done this. Intel, Apple, IBM, the old AT&T — the list is nearly endless, and the repeated mistake is focusing on the competitor and not on the customer.

The reason for this is rather simple. Think of two people racing each other to a finish line. The person who focuses on the finish line likely will get there first, while the one focused on the rear end of one of the runners will be second — at best. It could end much worse if the person you are focused on trips and falls, or is going in the wrong direction. Samsung was doing great chasing Apple while Apple was under Jobs, but once Cook took over and Apple started floundering, Samsung increasingly has appeared lost.

Of course, it is important to be aware of competitors, but if you over-engage, you’ll chew up lots of resources in the chase when the market wanders off in another direction. Take search. Microsoft is spending massively on Bing, but Facebook is likely a bigger threat to Google in the near term, and AI types of products tied to analytics is likely a bigger threat in the long term.

On Apple and Microsoft, the real threat to the iPod was the smartphone. Microsoft at one time was far more successful with it, but instead of surging ahead with the smartphone, it chased badly with the Zune. It missed Google as a threat in this space (though, ironically, Microsoft makes a ton of licensing dollars off Android).

Microsoft won with Windows 95 by focusing on the user exclusively, same with the Apple Mac, iPod and iPad; same with Google Search initially — and Amazon Web Services is mostly successful with users, not IT.

With analytics, firms will be able to focus on users like never before. The companies that win in the future likely will be the ones that use these tools more effectively to solve customer problems and turn them into advocates — and make their competitors chase them.

You can tell the difference between an old and a young company based on two vectors: resources and willingness to take risks. Typically the young company is more willing to take risks, because it has less to lose, while the old company becomes so worried about making an expensive mistake that it’s afraid to take risks.

Google is all over the map, but it likely will emerge as one of the great powers in the next generation of robotics. Microsoft is far more measured, but if robotics takes off — which seems likely — it will end up chasing Google, much the same as with search.

Robotics isn’t the only big bet Google is making. It actually has a program on immortality, which kind of seems crazy except when you realize that rich or poor, we all share one thing in common: We are going to die someday. And I’m pretty sure even billionaires can’t take it all with them. Were I a multibillionaire, I’d likely be investing a bit on longevity as well because, hell, I’m not actually looking forward to being dead. If you think search is a money machine, imagine the cash a longevity solution would generate.

The thing is, if a firm becomes afraid to take risks, it will never prevail. Risks are what create businesses, after all. Both Microsoft and Google were built on risk. I mention this because in Microsoft, there is a guy I’ve identified as Dr. NO who has been actively blocking anything he thinks is risky. It’s either because he doesn’t want to do any work or, more likely, because he realizes that there is no risk in saying “no.” He recently emerged as one of the major reasons Steve Ballmer failed. So I felt it important to point out that risk is part of business, and if you are afraid of taking risks — you have no business in business.

Wrapping Up: Butts and Risk Avoidance

One sure way to fail is to both focus on a competitor and avoid risks. Both practices are company killers, and one of the reasons small companies grow up to spank big dominant companies is that the big company will avoid risks and focus excessively on a competitor, losing track of the customer.

Every company’s continued success will be tied to how well they meet and anticipate customer needs and take appropriate risks to ensure their future. The reason we don’t have an iTV or an iWatch is because, I believe, Tim Cook is scared half to death to take the risk of failure, and he is focused too much on Samsung. I think a lot of us hope he — or his replacement — corrects this behavior reasonably soon.

If you are like me and trying to get back into shape, one of the tools you need is a good heart monitor. The MIO Alpha Heart Rate Sports Watch is a not so much a smartwatch because it basically does just two things well. It tells the time (not date), and it has a brilliant optical pulse sensor that is incredibly accurate. This allows you to accurately monitor your heart rate while running, biking or panicking without having to wear a chest strap. 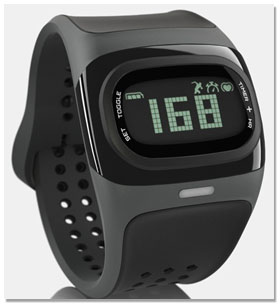 At around $200 it isn’t cheap, but I haven’t yet found anything better at doing what it does, and it is brain-dead simple to use. It will pair with your phone for online tracking via Bluetooth, and it works with Adidas micoach, which is one of the few good exercise apps that works with Windows Phones (which is what I use).

You can run the heart monitor only for around eight hours before charging it again — the optical sensor is power hungry — but if you exercise an hour a day, that’s a decent 8 days (the watch function takes little power). It is waterproof, so you can even wear it swimming.

You can input a heart rate range into the watch, which will then alert you if you are over or under. If your heart stops, however, you are screwed. I did note it works great where there is light, but it lacks a backlight, so seeing it at night will require an external light source.

Now I wish it had an activity monitor as well, which would count steps. I imagine that will show up in a future device, but it does a great job at what it does — monitoring your heart rate — and thus the MIO Alpha Heart Rate Sports Watch is my product of the week.