Microsoft’s Secret Plan to Take Over the World

Here in Silicon Valley, otherwise known as drama central, we live for conspiracy theories, have vampire CEOs who are rewarded for bleeding their companies dry, and even have executives who have their own fighter planes and are at war with each other. You would think we would have a few good, though probably fictional, conspiracy theories as well.

Last week, during the really impressive IE9 launch, it occurred to me that maybe what we’ve been seeing from Microsoft over the last decade was a plan to lull us into thinking the firm couldn’t execute — and while we were snoozing, it would come back and take over.

Given thatseveral Google employees just got caught stalking young Gmail users, and a bunch of companies got caught colluding to hold down employee wages, this may not be as farfetched as you think. But it is intended to be fictional and fun, so enjoy.

I’ll conclude with my product of the week: the secret kick-ass iMac that might be coming from Apple (or someone else) next year. I have pictures.

Once Upon a Time in Technology

Microsoft grew up by taking out larger firms like IBM and bypassing other firms of its same age like Apple. It faced its first real threat in its second decade of existence with a company called “Netscape,” which it defeated as well. Microsoft didn’t do this without gaining the attention of a number of governments who took its “Evil Empire” nickname seriously. They didn’t feel comfortable with another powerful entity within their borders, and they worked to take the firm down a notch.

Microsoft realized that it could not advance with everyone so frightened by its size, but the firm wasn’t yet large enough to go head to head with one government — let alone a whole bunch of them. So it crafted a plan and began to execute. The plan’s code name was “Normandy.”

Microsoft needed a firm to step up and take the heat off while it refined its strategy and worked to create a wave of unstoppable world-class products. It had to be a company it could beat though, so it funded Apple — a firm it had trounced in the past — believing it could easily trounce it in the future. Microsoft allowed Google to get funded too, but it manipulated the event to install a Google CEO who would want to repeat the same mistakes Netscape made and become an easy victim. It was less risky than simply paying the guy to screw up.

So Apple and Google advanced, but as critically flawed companies. One was tied at the hip to an aging, over-controlling executive with little willingness to pass the baton when the time came to move on; the other lacked the skills to generate revenue from anything except advertising but had a deep desire to penetrate the enterprise market.

Next, Microsoft went through a transformation process. It started making public, high-profile products that were crap, but it developed back-end products — which would later be used as the fabric behind its world-domination scheme — that were best of class. In the process, it had to take out the only pure-play high profile back end provider, Sun Microsystems, and get people to perceive it as an aging and infirm company that couldn’t execute.

It ensured Sun Microsystems’ failure by quietly convincing that company it needed to make software rather than hardware. After Sun foundered, Oracle — Microsoft’s strongest competitor — was tricked into buying it. HP’s CEO was trained in how to destroy large companies, then put into contact with Oracle’s CEO, and then fired from HP for doing things that Larry Ellison thought every CEO should be entitled to do. So Ellison brought him on board. This put the now-toxic CEO on top of the toxic hardware company and inside Oracle, so it could be twice destroyed from inside. Redundancy was important to this plan.

Mark Hurd sets about destroying employee loyalty at Oracle, as well as its ability to execute, turning it into a fertile ground for the Microsoft headhunters that would soon, like ninjas, follow.

Regulatory bodies start looking deeply at Google’s violations of privacy and Apple’s monopoly-like behavior and become increasingly grateful to Microsoft for providing alternatives and balance. Users tired of Google’s intrusions and arrogance and bored with Apple’s lack of variety and choice of carrier begin to once again flock to Microsoft’s platforms, taking the company to heights never before achieved.

Phase Four: ‘All Your Bases’

Cross-integrated products emerge — like Windows Phone 8, Windows 8, IE10, Xbox Midnight, and MicrosoftTV — that connect the back end Microsoft so painstakingly built with a blended front end, tying all of the user-facing products into integrated solutions.

These solutions seamlessly combine online and offline resources to create everything from augmented reality experiences to intelligent automated virtual avatars that can do your every bidding — but ultimately belong to Microsoft. We become so dependent on these avatars that we never question Microsoft’s dominance again.

Steve Ballmer and Bill Gates program Scott McNealy’s avatar to constantly repeat “hairball” at an annoying pitch everyplace he goes, and they program his smart home to put out a kitty litter scent and automatically open doors for stray cats.

They program Larry Ellison’s avatar and all the avatars within a 5-foot range to recite a litany of all the disparaging comments — particularly with regard to shortcomings real or imagined — that his ex-girlfriends and mistresses have ever made, in their own voices. This is triggered every time he comes within a quarter-mile of any woman. The goal, co-funded by NOW, is to make Larry become a monk.

Finally, they put a virtual camera on Eric Schmidt with a sensitive microphone and allow the rest of us to watch what he does 24 hours a day. Goal is to win a Grammy for the resulting Reality TV show “Stupid things my CEO said.”

Product of the Week: The Super-Secret iMac

True story: I was at Asetek a couple of weeks ago and saw what looked to be an iMac on the table. I got a chance to look at it closely when no one was watching me and snuck out some pictures, which should be displayed here if I can get them to publishing before something happens to me.

This product is stunning. All aluminum with heavy water cooling, it was set up so that it could likely overclock Intel’s next-generation processor, codenamed Sandy Bridge, to 5 GHz (something that was demonstrated as possible at this year’s IDF). It has full discrete graphics as a potential upgrade. 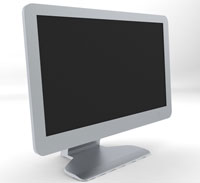 The result could be an all-in-one computer that toasts virtually any tower gaming system and might even be the first all-in-one workstation.

Ever since Apple had a bad experience with its Delco-designed (not kidding about this either) water-cooled system in a past generation tower, it hasn’t even wanted to talk water cooling — or so I thought.

So who is Asetek — the company that happens to be the leader in water-cooled solutions used in gaming systems and workstations — building this for?

Could it be HP, Dell — or perhaps even Apple? If I’m alive after you read this it probably isn’t Apple, but I’m pretty good at hiding, so that isn’t a sure thing.

Who do you think is going to offer this Apple-like or iMac-killer product? Since this week is all about mystery and conspiracy, the mysterious Asetek all-in-one is my product of the week. Unfortunately, you can’t buy it yet.

Reporting from an undisclosed location in Eastern Europe, this is Rob Enderle whose new motto is “feet don’t fail me now.”