At last week’s Mobile World Congress in Barcelona, the major players showed up loaded for bear.

Wearable computers became more robust, we got another Android fork, phones acquired superpowers, and it became clear that big — really big — is going to be all around us. Oh, and if you are into power and performance, this is the beginning of your era.

Even though Apple wasn’t there, leaks and moves the company made contributed to the massive change that was in the air, showcasing that it still plans to lead this market.

I’ll close with my product of the week: the Q20 — the BlackBerry phone that could restore BlackBerry.

Nvidia and Intel were solidly on the performance bandwagon at MWC. Both showcased massive improvements in their processor performance, and both could demonstrate new design wins as a result. While Intel was more about benchmarks, Nvidia was solidly on gaming, pushing PC-like gaming performance on portable devices. Its next-generation Shield uses its new K1 processor. (Shield is its ARM-based gaming platform, which runs Android.) It should be amazing and push the envelope with respect to what you can do with a portable device.

Qualcomm also was on performance, but it is more focused on the wireless modem, arguing that you will be able to see massive improvements in streaming speed shortly. Currently, it is working to drive a 1,000x increase in mobile bandwidth, using all of its resources. If successful, it could change streaming forever.

Nokia went after the low end market with its X series of phones forking Android — something Google has worked hard to prevent by increasingly tying its services to critical phone functions and apps — and providing very low-cost devices critical for emerging markets and low-cost services, such as Freedom Pop, that don’t subsidize phones. (Freedom Pop is an amazing low-cost phone service in the U.S. that uses Voice over IP technology to cut mobile phone service charges massively.)

Apple was clearly busy behind the scenes, cutting deals with Time Warner and Disney to ensure more current video content for Apple phones and tablets. There was some discord, because Comcast agreed to buy Time Warner, and Disney said it would move to other phones, which created some risk for the first deal and a short window of exclusivity for the second. Still, this should drive more content to all phones over time as other cable services cut deals with other providers.

In addition, it was leaked that Apple’s next phones will have super-hard Sapphire displays (invulnerability is a superpower) and will get bigger. Phablets (phones with screens approaching and exceeding 6 inches) were all over the place, suggesting most of us will have giant phones shortly. I’m currently using the big Nokia 1520 and have come to love these much bigger phones.

Microsoft had a number of design wins, and BlackBerry promised to put its BBM messaging service on Windows phones, which helped cause its valuation to increase significantly.

Samsung announced its Galaxy Gear 2 smartwatch, which effectively fixes the mess that was its first Galaxy Gear. Focused on exercise and far simpler, it no longer runs Android. Samsung actually has three versions: the Gear 2, the Gear 2 Neo and Gear Fit. None of the other majors even has a smartwatch yet, and Samsung now has three. (Apple’s window for the iWatch is closing — but it was late with the iPod and iPhone, and that didn’t really hurt it much.) Samsung’s new S5 is everything the troubled S4 wasn’t — a nice improvement.

There was an impressive amount of non-phone demonstration going on at the show. Qualcomm showcased how phones could become super remote controls to manage most of the electronics in our lives. Nvidia showcased its automotive integration, showing how you could take what Tesla has done with its amazing cars — which are basically big tablets wrapped in car clothing — and push the envelope into instrumentation.

I so want to find a way to put one of its prototype dashes on my project car. They looked amazing, with sensors and even self-driving capabilities.

If all these vendors have their way, our next generation of phones will be more robust (led by Apple), better connected (led by Qualcomm), more powerful (driven by Nvidia and Intel), and lots bigger than our last generation. They will be better integrated into our lives and into our cars to create experiences and provide us with capabilities we can only dream of today.

Oh, and they will be beautiful, as vendors experiment with new finishes, wraps and designs that are ever more attractive and customizable. (Nokia is reintroducing the ability to skin phones). Everyone brought their A game to Barcelona this year — except Apple — but even though it wasn’t there, it still plans to own this market, and hell, it could just do it again. This will be an amazing year for mobile!

Product of the Week: BlackBerry Q20

BlackBerry made one massive mistake when it came out with its new OS. It led with a hardware design that cloned the iPhone and didn’t embrace its most loyal customers, who wanted a keyboard. It eventually brought out the Q10, but it was just too different — it was missing the beloved scroll bar — and wasn’t widely adopted.

Well, BlackBerry corrected this mistake with the Q20 which improves on the scroll wheel, has much of what folks loved about the beloved BlackBerry Keyboard phones, and should hold those who needed to move to a newer phone but didn’t want to give up the classic BlackBerry they so treasured. 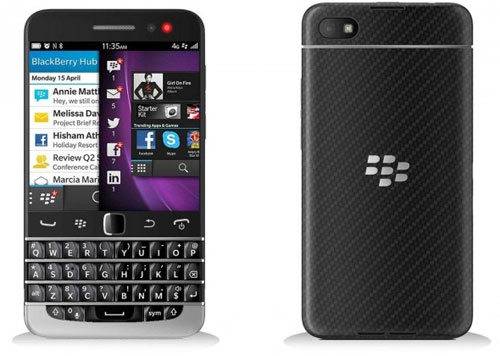 BlackBerry loyalists now will be able to have a phone that looks and works like it belongs in this decade, and still have the familiar experience that drew them to BlackBerry in the first place.

Vendors often don’t correct mistakes like this, choosing instead to argue they didn’t goof to begin with. BlackBerry’s willingness to correct this problem showcases that it is firing on all cylinders again, and coupled with embracing the Windows Mobile platform with BBM, this phone helped drive BlackBerry stock to new highs last week.