Motorola on Thursday unveiled its Moto X sensor-laden smartphone at meetings with the media and analysts in New York.

As expected, the device is chock-full of sensors and is controlled directly by voice. 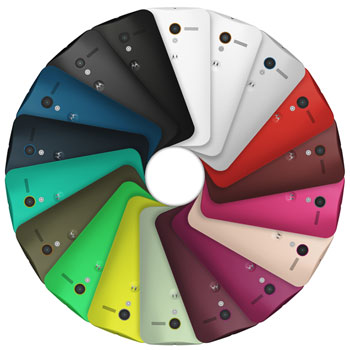 “You can stand on the other side of the room and say, ‘OK Google Now’ and it responds,” Ramon Llamas, a research manager at IDC, told TechNewsWorld. “This is Siri on steroids.”

Customers will be able to design their own Moto Xs from a choice of more than 2,000 combinations at Motorola’s Moto Maker online studio. They will be able to select the colors and decide on the front, the back, accents, memory and wallpapers, and even add a name or a short message.

Motorola will ship customers the finished, American-made product within four days of placing an order. Customers have 14 days to return or redesign their device; the return period is 30 days for California residents.

“If they’ve built the supply chain to support it, I think a lot of people will like it,” Carl Howe, a research vice president at the Yankee Group, told TechNewsWorld. “After all, it worked well for Dell in computers. On the other hand, if there are big delays or problems with the phones, it will be a supply chain disaster.”

Motorola did not respond to our request for further details.

The Moto X has a curved back and a 4.7-inch 720p HD AMOLED RGB display. It runs Android 4.2.2 on Motorola’s X8 Mobile Computing System architecture and connects to Google Drive for file storage.

The X8 architecture is based on a 1.7 GHz Qualcomm Snapdragon S4 Pro processor, with a dual-core Krait CPU for application processing, a quad-core Adreno graphics processing unit, a natural language processor and a contextual computing processor.

The device responds to the user’s voice even if the display is off or the user is not close by.

“The always listening concept they are playing with has possibilities, especially for hands-free use in cars,” suggested Howe. “To me, that’s the thing that will capture a segment of early adopters — it’s like Google Glass without the glasses.”

The contextual computing processor, meanwhile, knows where the device is physically located — in a user’s pocket, for example.

Users activate the camera with a twist of the wrist. Photos can be taken by touching anywhere on the screen.

“The camera automatically takes care of the focusing and lighting for you,” Llamas explained. “This is a problem a lot of smartphone vendors are trying to solve.”

The 4G LTE Moto X supports Bluetooth 4.0 LE +EDR and can function as a mobile hotspot. It weighs 130 gm and offers up to 13 hours’ talk time.

“In the limited time I had to play with the device in New York, it was batting a thousand,” IDC’s Llamas said.

Whether the new features differentiate the Moto X enough from other Android flagships that it will attract customers remains to be seen. Motorola was languishing before it was purchased by Google last year.

The build-your-own-product approach “has worked well for Nike and the Mini Cooper, and it’s a blueprint of things to come,” IDC’s Llamas opined. “I think there will be demand from people to have pictures of their favorite sports team or college or company or family on the back.”

The Moto X will be available in the United States, Canada and Latin America starting in late August. In the U.S., it will be available from AT&T, Sprint, US Cellular, Verizon and T-Mobile as well as Motorola’s website and at national retailers including Best Buy. Price will be US$200 with a new two-year contract.

“I think Motorola is past the point of playing hard to get,” Howe concluded. “They need broad distribution and sales, and they want it now. Offering their flagship on all carriers is the way to get that.”