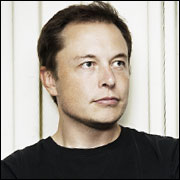 Musk first proposed the Hyperloop in an interview with PandoDaily (that portion of the discussion begins at about the 0:43:00 mark).

Hyperloop would be immune to weather, travel three to four times faster than a bullet train or twice the average speed of an aircraft, and take commuters from downtown Los Angeles to San Francisco in less than 30 minutes for much less than any other mode of transport, Musk has suggested.

It would also cost less to build than other modes of transportation. Musk estimates the cost of a Hyperloop between San Francisco and Los Angeles would be around US$6 billion, compared to the $68 billion projected cost of the high-speed rail project proposed for California.

It’s not clear just what Hyperloop, which Musk posits as an alternative to planes, trains and automobiles — and, yes, boats — will be like. He has likened it to a ground-based Concorde jet plane, a cross between a Concorde and a railgun, and an air hockey table. It would not require rails.

Solar panels may figure somewhere in the mix, as well as maglev, or magnetic levitation.

“It sounds like an in-tube maglev train,” Enderle told TechNewsWorld. “You’d have to figure out how to deal with the bow wave, and he indicated it wouldn’t be a vacuum tube, so it would have to be some kind of creative venting, like a huge silencer.”

The cost of producing the power required would be low, especially with solar panels being used, Musk maintained.

Musk may be lagging the competition. ET3 has a similar concept in the works for which it has sold more than 60 licenses worldwide — about a dozen of them in China, according to the firm.

The capsules are accelerated by linear electric motors when they leave the stations, and coast through the vacuum for the rest of their trip. Most of the energy used is regenerated as they slow down. Capsules will shoot along at 370 mph for in-state trips in the initial ET3 systems, and will accelerate to 4,000 mph for international travel.

We Gotta Move It, Move It

The United States’ transportation infrastructure is in dire need of an overhaul. Real highway spending per mile traveled has fallen by nearly 50 percent since the federal Highway Trust Fund was established in the 1950s, according to the National Surface Transportation Infrastructure Financing Commission.

The U.S.’ transportation infrastructure problems have been well known for years. In 2007, the U.S. Chamber of Commerce called for its overhaul.

Perhaps the government should throw its weight behind Musk’s idea or look at other proposals, such as the one from ET3.

“It was estimated that it would cost $3 million to run a monorail from Anaheim to the Los Angeles airport, and they spent $9 million proving that it wouldn’t be economical,” Enderle mused. “It would probably be cheaper to build the Hyperloop than to study it if that model holds true.”