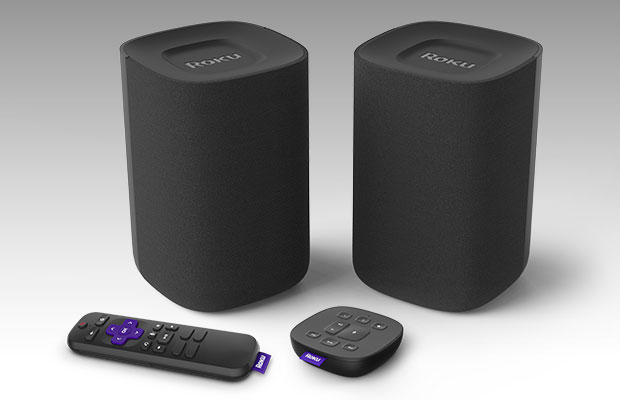 Roku has earned a reputation for making streaming TV products that are easy to set up and use, and that deliver above-average quality at affordable prices — and that’s the approach it has taken with its new Roku TV Wireless Speakers.

The company unveiled the speakers on Monday, although it doesn’t expect to start shipping them until October, when they will sell for US$199.99. Eager consumers can preorder to take advantage of early bird offers — $149.99 through July 23 and $179.99 from July 24 through October 15.

The speakers are designed exclusively for smart TVs that run Roku software. While that limits their market, the market is nevertheless substantial — one in every four smart TVs sold in the U.S. during first quarter was a Roku TV. Tailoring the speakers for Roku TV gives them some advantages as well.

For example, because Roku controls the software for both the TV and speakers, it can make setup a snap, as well as optimize sound for the TV’s picture and ensure audio-video sync.

“It will automatically time-sync audio and video, which is a problem with most AV systems,” Kevin Krewell, principal analyst at Tirias Research, told TechNewsWorld.

The wireless speakers are the first product to use the Roku Connect platform. Announced earlier this year at CES, the software is designed for companies that want to make products to connect to Roku TVs over WiFi networks.

“TVs are getting thinner, so there’s less room to put in premium audio,” he told TechNewsWorld.

“Content is produced at different volume levels,” Klarke said. “Commercials are louder than other content, for example. Even within content, there’s soft dialogue and then there are explosions, so you’re sitting there with your remote moving the volume up and down as you’re watching something.”

Roku addresses the space problem by moving the TV’s sound to a set of premium speakers outside the picture box.

It addresses the volume level problem with software.

“We include software that does automatic volume leveling,” Klarke said. “It will help boost dialogue, and it will help smooth dialogue between shows.”

Once paired with a Roku TV, audio from a number of sources can be pumped through the speakers — sound from any Roku streaming channel, as well as live TV through an antenna or cable box.

In addition, the speakers support Bluetooth, so they can be used to stream music from mobile devices.

A new remote bundled with the speaker package supports voice commands and can control both a TV and the wireless speakers. The company also debuted Roku Touch, a tabletop remote that can be used to control Roku components from anywhere in the home.

Roku’s announcement about the speakers offered scant detail about their audio specifications.

“There’s a woofer and tweeter in each speaker,” Klarke said. “Details about frequency response and range will be released closer to shipping time.”

It’s impossible to compare the sound quality to other speakers because of the lack of specs, said Tirias’ Krewell.

“It seems to compete with Sonos, but also Apple’s HomePod,” he said.

“It is cheaper than two HomePods, but seems to lack the dynamic acoustic control Apple is promoting,” Krewell added. “It seems to lack a subwoofer, so I can’t tell how good it will sound for movies.”

One thing Roku’s speakers don’t have is something that’s very hot right now in the home speaker market.

“Most of the new wireless speakers we have seen of late have digital assistants built in,” said Rob Enderle, principal analyst at the Enderle Group.

For example, Sonos recently launched both standalone speakers and a soundbar with digital assistant support, he told TechNewsWorld.

More companies have been attacking the TV experience through audio accessories, he told TechNewsWorld. The Sonos Beam sidebar ($399) and the Amazon Fire TV Cube ($120), which both support Alexa, are examples of that.

“Intelligent agents are going to be part of the next wave of smart TV controls,” Krewell added.

However, there’s always going to be a need for great quality audio to go with home entertainment, Roku’s Klarke maintained.

“We want to make the TV experience better,” he said. “That requires great content and a great screen. Adding audio to that rounds out the full experience.”

Nevertheless, Roku is not likely to be out of the digital assistant race for long. Earlier this year, it announced plans to roll out a voice assistant by the fall of this year. The natural language assistant will be able to comply with voice requests and pull up Roku content on different devices, even when a TV is turned off.

Adding wireless speakers to Roku’s lineup gives the company an opportunity to offer a solution to its users, rather than just a streaming box or a TV, Reticle’s Rubin noted.

Roku also may be planning for a future when all TVs support broadband, and streaming boxes will become redundant.

“The speakers give Roku something to sell even if a TV already has their technology embedded in it,” Rubin pointed out.

Roku’s streaming has been robust. It is the No. 1 streaming platform in America, based on 5.1 billion streaming hours, and it had 20.8 million active accounts in the first quarter of 2018, a year-over-year increase of 47 percent.

“Roku has what is arguably the best platform, but Amazon has been getting far more interest of late,” Enderle remarked.

“Still, this segment remains all over the map, and Samsung really remains the company to beat with better marketing and sales for their smart TVs,” he continued.

“I expect we’ll see a lot of changes in this segment over the next decade as new platforms emerge and the digital assistant technologies spread more widely,” Enderle said.

However, “on sound for TVs, Sonos largely remains the company to beat,” he added. “They are TV-independent, have Alexa built into their latest offerings, and tend to compete with the best in terms of sound quality. “