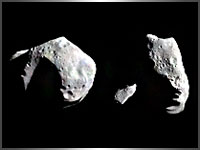 Section 5103 of the Act gives U.S. companies the right to resources mined from asteroids, although it does not give them rights to the asteroids themselves.

The law establishes the same type of framework that facilitated the growth of “the great economies in history,” remarked Eric Anderson, cofounder of the company.

“This is the single greatest recognition of property rights in history,” he said.

The new law may ease the qualms of Planetary Resources’ investors, but it may do little to settle certain international law issues, and it could precipitate space-based conflicts in the future.

If the U.S. can pass such a law, then other countries can do so as well, noted McGill University’s Ram Jakhu, associate director of the Center for Research of Air and Space Law.

Beyond providing a larger framework, the new law needs more lateral legislation to prop it up as the space mining industry grows, according to Jakhu.

“If these companies are unregulated, they can destroy the environments of the moon or these asteroids,” he said. “The U.S. government is in a position to impose the necessary rules on the American countries.”

The new Act may contravene the Outer Space Treaty of 1967, or OST, which was signed by the U.S., Russia, China and India, among others, critics have argued.

The U.S. likely will champion the new law as a customary interpretation of the word “use” in Article I of the OST, which provides for both the use and exploration of outer space, said Michael J. Listner, principal at Space Law & Policy Solutions.

It will focus on that instead of the OST’s prohibition of appropriating the moon and other celestial bodies, he suggested.

“If the major spacefaring nations push back against that interpretation, it will probably not create a customary usage of the term ‘use,'” Listner told TechNewsWorld.

If other spacefaring nations run with the U.S.’ interpretation of “use” and adopt similar laws, that could “turn the OST on its head,” he said, and diminish the effect of Article II — much as has been the case with Article IX, which calls for rendering mutual aid in outer space, and refraining from activities that have a negative impact on other nationals in space.

“The crux is, while there is a lot of outrage right now over the new law, the question is whether the other countries, including the developing nations, will create a sustained diplomatic pushback that will invalidate the desired outcome by the United States — much in the same way the developed nations pushed back with regards to the extraction of mineral resources from the ocean,” Listner said.

For those opposed to the new law’s provisions for asteroid resource-gathering, there are several avenues available, Listner pointed out. Among them are diplomatic pushback, direct conversations with the U.S. State Department, and one-to-one dialog with the United Nations’ Peaceful Uses of Outer Space committee.

“It’s not out of the question this will encourage other nations to become party to the Moon Treaty and give that accord new life,” observed Listner. “If it gathers sufficient support, it could create challenges to the veracity of the claim this new resource law makes.”

The issue remains whether the new law is invalid on its face.

“Such a determination could be made by a federal court,” said Listner, “if a suit was brought.”