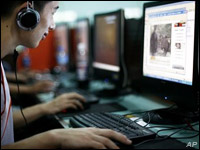 The anniversary of the Tiananmen Square massacre in 1989 has prompted Chinese authorities to expand the list of words and phrases barred from Sina Weibo,the country’s most trafficked microblogging platform.

This is par for the course in China, where in 2012,2011,2010, 2009 — basically every year social media has been huge — the Net police have exertedextra authority to squelch conversation about the event.

This year’s updated blacklist includes the Chinese words for “today,” “tonight,” “June 4” and “Big Yellow Duck,” among others. The duck thing is an obvious outlier, but there is an explanation: A giant yellow duck floating near Hong Kong was photoshopped so as to irk Beijing.

When such dastardly phrases are punched into Sina Weibo, which boasts 500 million registered users and which people liken to Twitter, there is a message stating that the phrase cannot be shown due to “relevant laws, statutes and policies.”

A ceremony is scheduled to take place in Hong Kong to remember the hundreds, or possibly thousands, of pro-democracy demonstrators killed in Beijing more than two decades ago.

One term slipped through authorities’ grasp, however: “64,” as in 6-4-1989. It reportedly rose to No. 14 on Sina Weibo’s most-searched list, but at that point vanished.

Canada’s Radio-television and Telecommunications Commission, which oversees the country’s wireless regulations, has issued a new code of conduct that will limit extra data and roaming charges. Thanks to the changes, extra data charges will capped at CA$50 per month, and data roaming charges at CA$100 per month.

The new code of conduct, to take effect on Dec. 2, will also allow users to terminate contracts after two years without paying cancellation fees. Wireless carriers in Canada have in the past forced customers to stomach three-year deals.

The changes will foster “a more dynamic marketplace,” according to CRTC, by forcing service providers to adapt to users’ needs.

OrCam, a startup in Israel, has devised a camera-based system that it hopes can give the visually impaired the ability to read and be mobile.

Using a small camera that attaches to eyeglasses, the OrCam device is reminiscent of Google Glass. It is connected via a thin wire to a portable computer that fits into users’ pockets and can recognize both objects and words — and speak them aloud into an earpiece — when the camera is pointed in their direction.

The device is currently available for US$2,500, which is akin to the cost of a midrange hearing device. It could signal a revolution in technology for the visually impaired, as it is equipped to decipher text “in the wild” — everything from bus numbers to the faces of friends.

The OrCam system comes equipped with a pre-stored collection of recognized objects. Users can add to this library by waving their hand, or even an object itself, in the camera’s field of view.

A powerful transatlantic cable — or at least more powerful — has been switched on.

The link will be used to determine the operational requirements to run 100 Gbps wavelengths between Europe and North America.

Operating at 100 Gbps, the submarine cable is not as high-powered as some others, which can operate at around one terabit. That said, the new cable is the fastest of its kind: Intra-border cables regularly hit 100 Gbps, but previous transatlantic cables had been stuck at 10 Gbps.

The link was launched as part of the TERENA Networking Conference in Maastricht, the Netherlands.