No Joke, MultiFab Prints 10 Materials at Once 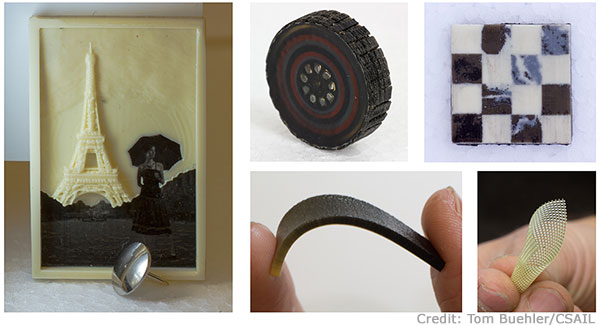 Researchers at the Massachusetts Institute of Technology’s Computer Science and Artificial Intelligence Laboratory, or CSAIL, this week presented a new MultiFab printer at SIGGRAPH, an annual computer graphics conference.

For all of the promise 3D printing has offered, additive manufacturing techniques generally have been limited to one material at a time — until now. The new multifabrication printer, still under development, boasts the ability to work with up to 10 materials simultaneously, and the implications are huge.

MultiFab was pieced together with US$7,000 worth of off-the-shelf parts, but it’s more capable than 3D printers that cost several times as much, according to MIT.

“3D printing with two or three materials had been done before, but now we push the boundary much further by being able to print 10 materials,” he told TechNewsWorld. “This enables a new range of applications that have not yet been fully explored.”

The self-calibrating, self-correcting 3D printer’s ability to print up to 10 materials simultaneously means it can print finalized objects.

MultiFab uses machine vision to scan objects in three dimensions during the printing process, checking for errors and applying correction masks when needed. It’s print resolution is an ultrafine 40 microns, less than half the size of a hair.

CSAIL’s 3D printer differs from other multimaterial printers in that it blends polymers into microscopic droplets, rather than extruding melted materials that have to harden. Along with allowing MultiFab to work with more materials, its inkjet-like approach makes its designs easier to scale.

An “ultimate dream” scenario for MultiFab, according to Ramos, would be a system that would allow local merchants who couldn’t afford a $7,000 printer to drop off designs at a FedEX outlet and have finished products printed out in batches.

There’s still much work to be done to reach that point.

However, this latest development pushes 3D print more in line with real manufacturing hardware, according to Rob Enderle, principal analyst at the Enderle Group.

3D printers have been little more than a bad joke up to now, he said.

“You can move into really using them for short-run manufacturing, and you are one huge step closer to having something in your home that could build — real-time — what you order online today,” Enderle told TechNewsWorld.

The CSAIL team has still been working to overcome two of additive manufacturing’s main challenges, which are materials and design tools, noted Ramos.

“The potential applications of 3D printing are driven by the quality and properties of the available materials,” he said. “We are working on developing new classes of materials that — we hope — will enable new applications.”

Design tools are a critical challenge, Ramos remarked. Researchers still need to create workflows that better suit the needs of designers who work with 3D printing.

Such tools are “still on the horizon,” he said.

Price also represents a challenge for the industry, according to Enderle.

“The really useful stuff is still very pricey,” he said. You can print a working gun, for example, but it’ll cost you roughly 20 times what the same firearm would have cost in the a store.

Also, 3D printing is still best suited for basic objects. We’re still years away from printing an iPhone, Enderle said, but the progress has been incredible.

“This announcement showcases we are quickly moving from Play-Doh factory level technology to industrial lab quality,” he observed, “and that is equivalent to going from the brass age to the industrial age in just a few short years.”