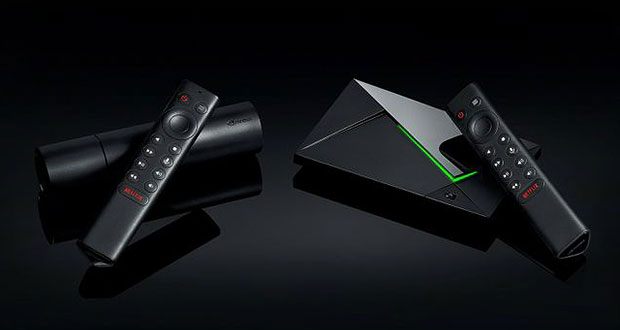 Nvidia on Monday introduced two new versions of its Android TV-based Shield streaming product. Shield TV (US$149) and Shield TV Pro ($199) are replacements for the last generation of Shield video streamers, which Nvidia introduced in 2017.

The Shield TV Pro retains the form factor of its predecessors — the box-like form favored by the industry generally — while the lower priced Shield TV is cylinder-shaped.

“The Shield TV is meant to be the more mainstream product and has a unique form factor for the market,” said Austin, Texas-based Paul Erickson, senior analyst at IHS Markit, a research, analysis and advisory firm.

“The processor speed is an incremental speed bump, not a giant speed bump, but that’s not a problem given the state of Android-based gaming,” Erickson told TechNewsWorld.

Android gaming developers typically design their wares for the lowest common denominator processor in the ecosystem, he explained, so there’s nothing in the market yet to tax the new processors in the Shield products.

Shield TV has a new slim shape — designed to blend with or hide behind home entertainment centers, according to Nvidia — and it supports Gigabit Ethernet and dual-band WiFi.

The more conventionally shaped Shield TV Pro has more memory than its sibling, 3 GB compared to 2 GB. It also has more storage, 16 GB versus 8 GB, as well as two USB 3.0 ports that can be used for running a Plex Media Server or any other USB device.

Both gadgets have redesigned remote control units that run on two AAA batteries, and both have motion-activated, backlit buttons, a built-in lost remote locator, and a mic for searching for content via voice.

Because they support Android TV, the Nvidia devices open the door to the Google Play store, where users can access more than 500,000 movies and shows, and more than 5,000 apps and games.

“Nvidia pushes the boundaries of how media and entertainment are consumed in the home, said Shalini Govil-Pai, senior director of product management for Android TV at Google.

“By bringing together Dolby Vision and Dolby Atmos with Android TV, users of the new Shield TV media players receive an unmatched experience that well represents our platform’s rich content and capabilities,” he added.

Support for Dolby sound can be very important to owners of 4K TVs, noted Rob Enderle, principal analyst at the Enderle Group, an advisory services firm in Bend, Oregon.

“Dolby is basically table stakes for a good 4K TV, so if you want to do 4K well you have to have Dolby for sound,” he told TechNewsWorld. “The up-converters built into TVs just aren’t very good, and this allows 4K TV owners to get a better experience than they would likely get natively.”

Nevertheless, it might not help Nvidia expand the reach of its Shield TV products. For most consumers, Dolby support may be just “nice to have.”

“However, not a lot of consumers own home theater systems nowadays, and Parks Associates consumer survey data finds that while soundbar penetration is at roughly 24 percent of U.S. broadband households, only a small percentage of these owners claim to have a soundbar with Dolby Atmos support,” she told TechNewsWorld.

The new Shield TVs also support Google Assistant and Amazon Echo connectivity, and use an artificial intelligence-powered upscaler that enables them to turn 720p and 1080p into 4K video in real time.

“That’s good because it can introduce lag, but for those of us that like to watch old TV shows on our 4K sets, Shield TV should provide a better visual experience,” he pointed out.

“Upscaling works on video content 30 fps or below from all video sources,” Hanich said. “As of right now it doesn’t work on games due to their higher frame rates, but it’s likely that Nvidia is working on adding this in the future.”

The Shield TVs are arguably the highest-performing set-top boxes in the segment that aren’t full game consoles, Enderle maintained.

“For those who want to play games on their TVs from their PCs without having to move that PC, or who want to use one of the best-priced cloud gaming services, Nvidia’s Shield line is the best choice,” he said.

“I believe the future of gaming is in the cloud and this provides a good indication of the best cloud gaming experience, for the money, currently in market,” Enderle observed.

At $200, the Shield Pro is comparable to the Apple TV 4K, which has more storage than Nvidia’s offering but can’t match its gaming media server capabilities.

Shield TV, at $150, is comparable to the Apple TV HD, which also has more storage than the Nvidia device, but no 4K capabilities.

However, Roku and Amazon have been taking high-end features and migrating them south. For $40, the Roku Premiere supports 4K video. For $120, Amazon’s Fire TV Cube supports 4K video, Dolby Vision and Dolby Atmos. Coming down the pike are smart soundbars for $180 that also can stream video.

Nevertheless, the new Shield TV products should have a positive impact on Nvidia’s business. “They should be good for demand. It should broaden their potential audience,” Erickson said.

“It will enable them to hold on to their existing customers,” he added. “They will jump easily to these new products. But I don’t see them expanding out of that core audience and putting a dent into the Amazon and Roku market.”