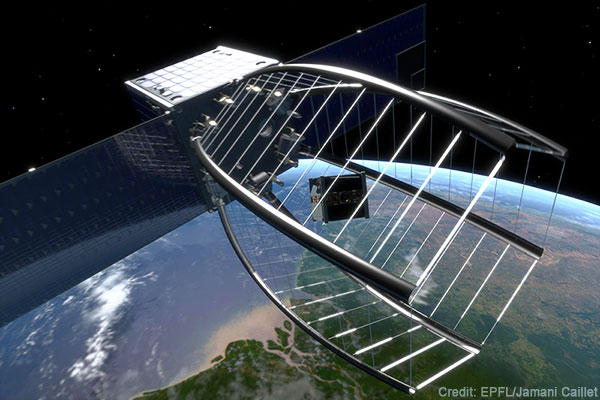 There are more than 300,000 pieces of debris larger than 1 cm circulating less than 2,000km above Earth, and the Ecole Polytechnique Federale de Lausanne’s Space Engineering Center, aka “eSpace,” is working on a solution to the problem.

EPFL this week announced that its CleanSpace One satellite project has passed a milestone toward its goal of launching a cleanup satellite to capture and destroy its SwissCube, which has been orbiting Earth for more than five years.

Swiss Space Systems, or S3, which focuses on in-orbit delivery of small satellites, will invest about US$16 million in the cleanup system, which eSpace likened to a Pac-Man gobbling up space debris.

The current design envisions a satellite that will deploy a net around a piece of debris and close down once it has captured the target.

The CleanSpace One launch is scheduled for 2018.

“I am skeptical of a net idea, because the particle size distribution can vary substantially,” said Jekan Thanga, assistant professor at Arizona State University’s School of Earth and Space Exploration, or SESE.

Larger particles pose a much higher risk of taking out the clean-up satellite completely, he told TechNewsWorld.

How the Space Pac-Man Will Work

SOAR, a small suborbital reusable shuttle, will piggyback on an Airbus A300 jetliner.

When the jet hits its cruising altitude of 35,000 feet, the SOAR will fire up and take off upwards.

It will eject a vessel at an altitude of 80km. When the vessel hits 700km above Earth, it will release the Pac-Man satellite into Earth’s orbit.

All elements in the chain, including the satellites, will have their own re-entry systems.

The Feasibility of the Project

A multitude of Pac-Man satellites will need to be deployed to clean up all the space debris.

“For it to be practical or realistic, it [must] be focused on retrieving debris from one site or removing one satellite,” SESE’s Thanga pointed out.

Fuel will be the main limiting factor, because “to bring debris down to low altitudes consumes substantial fuel,” Thanga said.

A Question of Will

What happened to NASA and other countries’ space authorities? Why have they not focused on space debris cleanup?

Cleaning up space “has been discussed for at least the past 20 years, but, as is the case with many global problems, little has been done,” said Jim McGregor, principal analyst at Tirias Research.

That’s partly because many of the agencies have been defunded due to a loss of interest.

“Take NASA. Space is no longer politically advantageous, and support for going into space has declined since the Clinton administration,” McGregor told TechNewsWorld.

The lack of will is another reason, he said. “I have yet to see a credible plan to reduce space debris, and find it hard to believe that any significant effort will be put in place until it starts threatening life.”

Mechanical and Other Issues

It’s not yet clear whether the net will be deployed from the Pac-Man satellite’s nose, side or rear, but “all of those approaches are challenging,” McGregor said. “I would favor a solution that just alters [the target’s] orbit to force it down into the atmosphere to burn up.”

Then there’s the question of actually matching velocities with the target, which Thanga described as “very difficult.”

Different items of debris travel at different speeds, and the wide variation in speed, direction and altitude also will pose problems, noted Rob Enderle, principal at the Enderle Group.

“The satellite could easily be trying to grab one thing and then be hit at speed by something else from another direction, which would change it from a junk solution to junk,” he told TechNewsWorld.

Finally, the sheer cost of tracking down multiple bits of debris would be astronomical, so it’s likely each satellite could capture just one bit of debris, which “is my understanding and concern,” McGregor said.

That’s why S3 is in the game — it hopes to sell tons of junk-retrieval satellites to various governments.