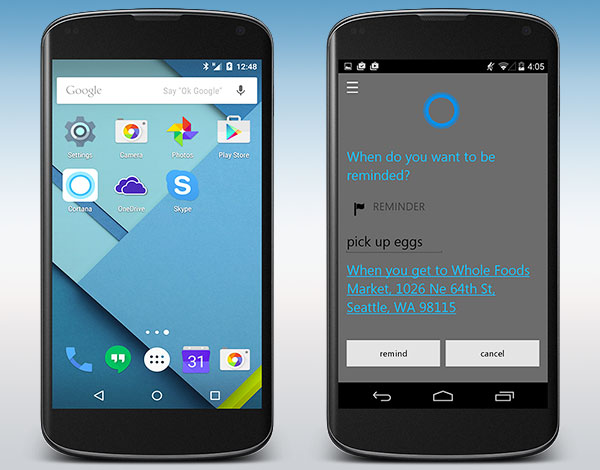 Microsoft advanced its “if you can’t beat’em, join’em” mobile strategy with Tuesday’s announcement of Phone Companion, an app built into Windows 10 that’s designed to synchronize information across multiple platforms, including Android and iOS.

“In a multi-device world where you move between your phone, tablet and PC multiple times a day — you expect your experience to go wherever you do,” noted Joe Belfiore, vice president of Microsoft’s operating system group.

“That’s why we built Windows 10 on a common core and enabled Windows Universal Apps, so people using Windows 10 for both their PC and smartphone experience will get an optimal, seamless experience as they transition devices throughout the day,” he added.

“But, we also realize that many people use iPhones or Android phones, and we want them to enjoy some of their Windows experience and content while away from their Windows 10 PC,” Belfiore continued. “Regardless of the operating systems you choose across your devices — everything important to you should roam across the products you already own — including your phone.”

Windows 10 Phone Companion — which is expected to be in the next Windows 10 Insider build scheduled for release in a few weeks — works like a hub on a PC for a user’s mobile devices. When it’s set up, mobile devices are added to it so information can be synchronized across them.

Windows devices can simply be added to the PC app. Devices for other platforms require Microsoft apps for those platforms be installed on those devices — apps such as OneNote, Office, Xbox Music and an upcoming version of Microsoft’s digital personal assistant, Cortana.

Microsoft’s strategy to play nice with its competitors in the mobile market is not only a good strategy but a necessary one.

“We’ve seen a trend with Microsoft recently to build and support its products and services on non-Microsoft technologies and platforms,” said Rob Sanfilippo, an analyst with Directions On Microsoft.

“The company can’t ignore the Android and iOS platforms, which control the majority of the phone and tablet markets, and thus it is aiming to provide applications and services to customers of those platforms, and looking for ways to make its products compatible with them,” he told TechNewsWorld.

“This could help Microsoft maintain some business of customers moving to the other platforms while allowing potential new customers to try Microsoft products and services without moving off their current platforms,” he added.

Microsoft’s multiplatform strategy is “highly innovative,” but it’s also a recognition of the company’s past strategic mistakes, said Charles King, the principal analyst at Pund-IT.

“Microsoft has simply missed the boat when it comes to owning meaningful share, especially in mobile devices,” he told TechNewsWorld. “The company needs to support multiple platforms and devices or risk Windows 10 becoming irrelevant to sizable numbers of individuals and organizations.”

Microsoft’s multiplatform strategy is designed to build on the company’s strengths, observed Van L. Baker, Gartner’s research vice president for mobility. Those strengths include its Office apps, where it has a dominant position on the desktop.

“That’s good, and that’s smart from Microsoft’s perspective, and it’s reinforcing the fact that they are platform-neutral, which I think is important, because Google and Apple are not doing that,” he told TechNewsWorld.

“It could be potentially a positive for Microsoft and a differentiator,” Baker added.

Expanding Cortana to other platforms also could separate Microsoft from its competitors.

“There’s going to be a battleground over the digital personal assistant apps, and Cortana is one of the better ones out there,” Baker said.

“If user behavior begins to change, and they begin to use these virtual personal assistants more regularly, there’s going to be an opportunity for Microsoft to compete in that space,” he added.

Cortana and Google Now are in a dead heat in the race for top virtual personal assistant, with Apple’s Siri trailing the pack, said Patrick Moorhead, founder and principal analyst with Moor Insights & Strategy. However, there’s a cloud over any service Google offers.

“The benefit of Siri and Cortana is their view on privacy,” he told TechNewsWorld. “You’re really taking a big risk when you’re using Google Now because of the business that Google is in and how it makes its money — as opposed to Microsoft and Apple, who don’t barter information to keep their stock price going.”

Microsoft’s cross-platform strategy may give it some additional visibility in the mobile market, but it’s not likely to pose a challenge to the market leaders any time soon.

“I don’t think Google or Apple is going to lose a lot of sleep over this,” Canalys analyst Daniel Matte told TechNewsWorld.

“iOS and Android have such a critical mass out there, it’s hard to envision anyone cracking the stronghold those two have,” added Jim McGregor, founder and principal analyst with Tirias Research.

“If Microsoft becomes a preferred platform for certain applications, it could improve its position not only in its traditional markets but in other markets, too,” he continued, “but it’s pushing against a very hard brick wall.”