PowerMap Lets Users Visualize the Lay of the CRM Land

PowerObjects has released PowerMap, a new add-on for Microsoft Dynamics CRM. This is the first iteration of the product, and the functionality is basic. 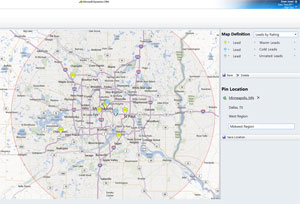 However, version 2, which is expected in a few weeks, will have stepped-up capabilities, PowerObjects CEO Dean Jones told CRM Buyer.

A more advanced version will follow within a few months, he said.

At its core, PowerMap does what the name suggests — allows users to plot addresses of a group of entities on a map within Dynamics CRM.

“It is a way to create a visualization of geolocation in the database,” Jones said.

Mapping data has become an essential tool for a lot of companies and though Dynamics CRM does provide some functionality in this area, PowerMap kicks it up a notch or two, he said.

Information from a database is typically displayed in rows and columns, which can make it difficult to detect patterns. With PowerMap a user could geocode a company’s accounts to see which states had the highest concentrations of its most profitable customers, for example. Or a firm could geocode the locations of all of its tractors, say.

However, PowerObjects anticipates that more common uses for the mapping functionality will be to visualize the locations of accounts, contacts or prospects — perhaps for a sales rep who is setting out to visit a territory.

A user can geocode any entity in Dynamics CRM with this first iteration, Jones explained, including custom entity types. All that is required is an address field.

Version 2.0 will provide users with additional functionality. They will be able to use a map definition tool to create three views within a map instead of just one, for example.

PowerMap uses Bing maps technology. It can be installed with any Dynamics CRM 2011 application, including online or on-premises installations.

Coremotives Has the Whole World in Its Plans