Qstream, a company that has developed a gamification-based app to help sales reps learn complex sales-related content, has broadened and deepened its functionality so the platform can be used in a number of scenarios.

“We have expanded types of situations in which a company can use its Qstream license,” Qstream cofounder and CEO Duncan Lennox told CRM Buyer. 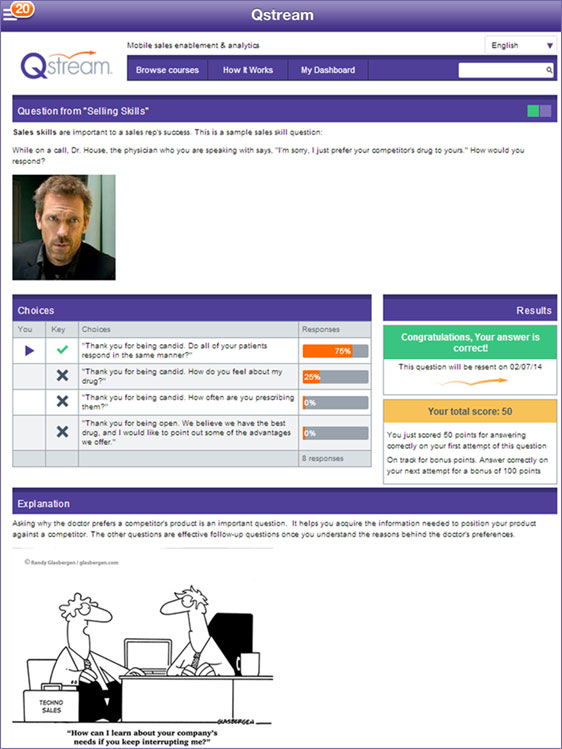 That is because the initial premise of Qstream has proven to be wildly popular with companies beset by a common problem: the difficulty sales reps have — all humans, actually — in retaining information that is presented in large chunks over a short period of time, such as in training seminars.

“Companies spend a lot of time and money training their sales force, but then data shows much of this information is quickly forgotten — simply because that is not how our brains learn,” Lennox said. “So we developed a methodology to address that problem.”

Qstream works roughly like this: Following a training event, a company can use it to send basic questions about the content to a sales rep’s mobile device or email address. It would send just a handful questions that could be answered at the rep’s leisure.

“We call it ‘Jeopardy for sales people,'” Lennox said.

Changes to the Model

The enhancements to the Qstream platform include more options for integration with CRM systems, as well as new ways to use Qstream in a variety of situations — such as to establish a common base of knowledge from which sales reps can absorb new information before or even during a training event.

Companies wanted deeper integrations into their existing CRM systems, according to Lennox.

“Usually what happens is that they start with a pilot project with us and then decide they want to roll it out company-wide and use that information in the HR departments and, more fundamentally, in their business processes,” he said. “So we extended those capabilities in this upgrade, making it possible to send data into a CRM system.”

To that end, Qstream developed standard-based APIs around trigger events, such as when a rep completes a game cycle. The system then automatically pings the CRM system and sends the appropriate data. The company is able to configure which data will be sent when.

“We are seeing companies now deploying Qstream on a global basis so we added the necessary language support,” Lennox said.

The upgrades include next-generation native apps for Android and iOS in 10 languages.

Qstream can be configured for use before an event to bring sales reps to a common baseline of knowledge — or just to assess their overall knowledge of a particular subject.

Companies can run the app during an event to make sure reps are retaining the information and to further facilitate the learning process.

Questions based on the training materials a company plans to present can be prepared in advance, for example, and then sent to participants during a break.

Apple May Throw the Healthbook at You The Fine Art of Belly Scratching