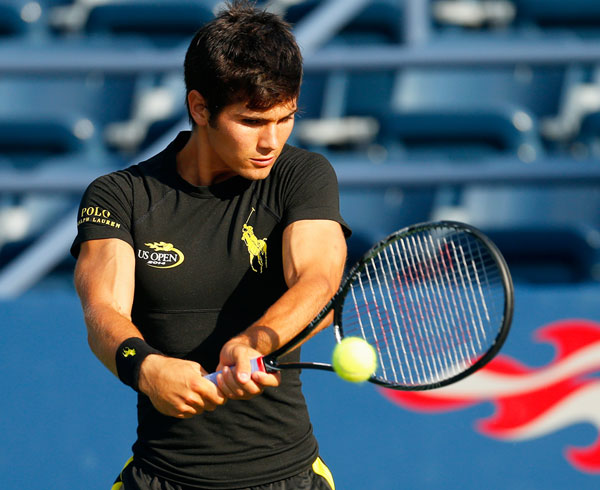 Ralph Lauren this week merged the tech and fashion worlds with a new smart Polo shirt designed to track activity and keep its wearers healthier while looking good.

Knitted into the Polo Tech shirt’s core are sensors that read biological and physiological information.

The company partnered with Msignal to develop a “black box” that includes an accelerometer and gyroscope, which capture movement and direction. Data is captured and sent to the cloud, where it is analyzed using a set of algorithms. Out comes information on heart rate, respiration, stress level and energy output.

The wearer of the Polo Tech can access the information via a smartphone app.

Marcos Giron, the No. 1 singles player in the Intercollegiate Tennis Association, donned it for practice sessions at this week’s U.S. Open. The shirt allowed Giron to track his movements and make real-time adjustments to his play, form and breathing.

Taking the plunge into wearable technology was not a natural step for Ralph Lauren, said JohnFeland, CEO and founder of Argus Insights.

“The biggest shock is that Nike did not do this first,” he told TechNewsWorld. “Ever since taking their Fuel Band off the market in April of this year, everyone has been waiting to see if Nike would re-enter the market with a better fitness monitoring solution.”

Still, Ralph Lauren brings assets to the table that differentiate it from competitors like Nike or Adidas, Feland pointed out.

“Most wearable form factors to date have been smartwatches or fitness bands,” he noted. “The design of these devices has been driven more by engineering than fashion, colliding with the users’ need to both quantify themselves and do so without feeling like Dick Tracy or the Borg. Polo’s smart shirt allows for more subtle integration of wearable technology into your daily life.”

The company can cater to a high-end niche population that is willing to spend more for clothes, said ZeusKerravala, principal analyst at ZK Research.

“We’ll see more of this from companies like Ralph Lauren,” he told TechNewsWorld. “Lacoste also comes to mind, because they’ll be able to offer premium priced shirts that are appealing to people that like brand names — that like the latest fashions.”

Next Step in Wearables

That it wasn’t necessarily a natural step makes it even more impressive that Ralph Lauren got in when it did, said Kerravala, because wearable clothes have significant growth potential.

“Building the wearable industry seems like it’s going to be a little bit like building a wall,” he suggested. “The first brick was something like the FitBit, and now we’re getting into the next building stage, which is a fashionable shirt that can do a little more in terms of measuring breathing and heart rate. We’re going to see more of this in different forms, and they’re just going to get smarter and smarter.”

That’s not to say that mainstream consumers are going to be rushing out to buy the Polo Tech when it hits the market, said Feland.

“Most of us are never going to be engaging in the level of activity required to be a tennis pro,” he remarked, “but as the wearable ecosystem expands, the best wearables become the ones that no one knows you are wearing.”

That expansion will open the gates to more shirts like the Polo Tech. It will be up to makers like Ralph Lauren to keep the levels of innovation high if it wants to keep its headstart in the space, said Kerravala.

“This is probably going to be more of a niche product, and with fitness-tracking tools you run the risk of something being a fad or of the novelty wearing off,” he observed.

“The key to Ralph Lauren’s shirt or something like a smart Adidas or Under Armor shirt,” Kerravala suggested, “will be to add more and more features — for instance, monitoring blood pressure for at-risk users — so that it’s of so much value they have to keep re-buying it.”