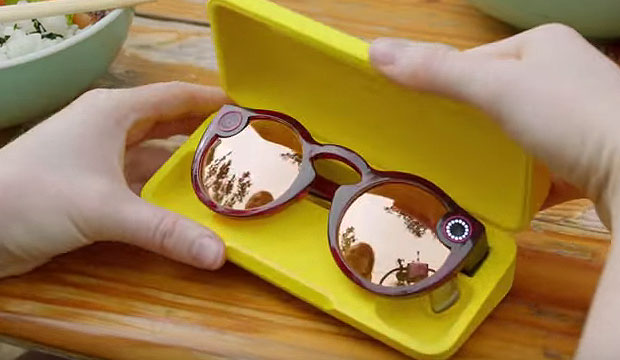 Snap, the company behind Snapchat, on Thursday released the second generation of its Spectacles, a wearable video camera that captures short clips that can be synced to a smartphone. The new version also takes still photos and is designed to be water-resistant.

The new Spectacles sport the same basic Ray-Ban style design as the first iteration, but they have been slimmed down and are less bulky — a good thing both for wearing the glasses and transporting them. In addition, users have more color options. They include the ever-fashionable onyx, as well as ruby and sapphire.

The result of the makeover is that the new version looks much more like an actual pair of sunglasses than a wearable video camera.

This second-generation product offers more than a new look for the exterior, however. The connectivity between the device and theuser’s handset has been improved, making it easier to share videos and still photos. The software has been improved as well, and theSpectacles can create an ad hoc WiFi network for sharing content to mobile phones.

Fun the in the Sun

Spectacles aren’t designed for capturing long-form videos — and inthat way they are akin to a poor’s man answer to Google’s Glass. They take short videos to chronicle “moments” — similar to the experience Vine or Glide offers. With the second-generation Spectacles, users can record 10-second videos — same as the first model — but there are options to record 20-second or 30-seond videos as well.

The new Spectacles offer an upgrade in video resolution — an increase of 25 percent to 1,216 x 1,216. It isn’t high definition, but it still represents a notable improvement in quality. Still photo resolution is an impressive 1,642 x 1,642.

With the new Spectacles, Snap also has doubled down in terms of audio. Inaddition to the single microphone that is meant to record the wearer,the new version of the glasses includes a second mic to record anyoneclose to the wearer.

The original Spectacles weren’t exactly a huge hit when Snap released them a year and a half ago — far from it, in fact. That could be blamed in part on the company’s distribution methods. The glasses initially were soldexclusively via the company’s pop-up vending machine, dubbed “Snapbot.”The glasses were made available for online purchase a few months later, but they failed to catch on with consumers.

Reviews of the first Spectacles were mostly positive, but consumers seemed unimpressed. Sales of the original glasses reportedly numbered around 150,000 — far less than the number produced.

Even worse for the company was the fact that only about half of those who purchased the first-generation wearable cameras continuedto use them after the first month.

As a result of the poor Spectacles sales, Snap laid off about 7 percent of its total workforce, and it had to write down nearly $40 million at the end of 2017 related to the unsold glasses and retailer cancellations.

Given the poor reception of the original Spectacles, it may seem oddthe company would try again. However, the glasses could represent Snap’s best chance to become more than a service that provides expiring private messages. Entering the consumer electronics hardware market could give it an edge in the competition among social media rivals.

“If these glasses are usable, they could be a distinctive brandelement — and like Apple, Snap has to get it right in order to createthe category,” added Kay.

“There were MP3 players before the iPod, but Apple pulled it all together,” he noted. “There still seem to be limitations with this revision, and I never understand why companies don’t limit steps to the bare minimum. Really, the default should be one-touch upload.”

Spectacles could be a product that aims to solve a problem that doesn’t exist. Given the proliferation of camera phones — some with very advanced features — it’s not clear there’s a consumer need for a wearable camera.

“That is the biggest flaw of the Snap camera glasses,” said Roger Entner, principal analyst at Recon Analytics.

“It creeps out people, and they don’t want to be recorded without their consent,” he told TechNewsWorld. “The biggest benefit is you can record at any time in a very convenient way, but that scares people.”

Spectacles could have some acceptable uses, but “in order for camera glasses to succeed, society has to either come up with a proper framework or a new system of consent,” suggested Entner.

“Nobody wants people to wear these glasses in certain circumstances –like in a bathroom,” he pointed out.

For Snap, resolving the social acceptability and etiquette issues might not come quickly enough, according to Kay. “Snap needs this win to survive.”