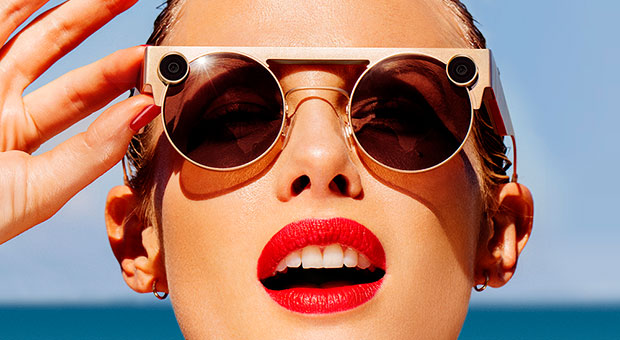 With Tuesday’s announcement of its Spectacles 3 sunglasses, Snap must be hoping three times will be the charm.

Unlike the two previous generations of the product, Spectacles 3 has two HD cameras — one at each corner of the glasses frame — to add depth perception to the peepers’ repertoire.

“The second camera for depth should improve capture and the overall experience, if not add anything truly new,” said Eric Abbruzzese, senior analyst at ABI Research, a technology advisory company headquartered in Oyster Bay, New York.

The slick sunglasses, which will go on sale in November, have lightweight steel frames, circular lenses and, at US$380, are more than twice what previous models cost. They come in two colors: carbon, which looks black, and mineral, which looks like champagne gold.

“They’re fashion-forward, which fits well with the target audience but not a wider audience,” Abbruzzese told TechNewsWorld.

“They’re a bit too trendy for me,” he added, “but I don’t think they’re so radical as to impact sales.”

“However, it is lacking key features such as a heads-up AR display, or on-board computing capable of more advanced features such as object detection or audio-virtual assistant feedback,” he told TechNewsWorld.

Along with unveiling the new glasses, Snap released a suite of 3D effects designed to take advantage of the added depth of content captured with the twin cameras.

Users can capture photos and videos by tapping a button on top of the glasses. They can share captured content on Snapchat or other platforms by downloading it onto a mobile phone. The new Spectacles 3 suite also offers ways to manipulate the content.

Moving content to a phone requires “syncing.” It can’t be sent to Snapchat automatically — unless you have an iPhone connected to WiFi and your Spectacles 3 are charging.

“They strive for the most dynamic social media content and are currently very active and engaged Snapchat users,” he said.

Social media influencers also could be in Snap’s sights, ABI’s Abbruzzese suggested. Snap could tap their audiences to drum up interest and scale sales.

“I applaud Snap for continuing to experiment with its vision of augmented reality, but I doubt this new version of Spectacles will gain mass appeal,” said Debra Aho Williamson, principal analyst at eMarketer, a market research company inNew York City.

“The high price and clunky user interface will make most Snapchat users simply look the other way,” she told TechNewsWorld.

Pricing could be a barrier to sales for Snap’s new high-tech specs.

“The price point is out of the range for high school or college kids who are, in this early stage of the market, the main buyers,” observed Andreas Scherer, managing partner at Salto Partners, a management consulting firm in Reston, Virginia.

“Kids who use Snapchat like doing AR stuff, but they tend to be high school and junior high kids, not someone who can afford a $380 pair of glasses,” said Bob O’Donnell, chief analyst at Technalysis Research, technology market research and consulting firm in Foster City, California.

“The people who can afford it are not the key users, so there seems to be a dichotomy there between the target market and who can afford to buy the product,” he told TechNewsWorld.

“They’re essentially a very expensive pair of sunglasses,” O’Donnell said. “They had trouble selling the first generations of these glasses at a significantly lower price point, so I think it’s going to have an extraordinarily limited market size.”

The Spectacles 3 price is fine for a nice-to-have product and status or fashion piece, “but for the wider market, and specifically for Snap’s primary user audience, which skews young, the price is too high for any realistic large-scale adoption,” Abbruzzese said.

“If there was something unique about them — something different in function than what the app can already do — there’s a better argument for the price, but as it stands it’s only a mobile app extension,” he added.

Although the price likely will turn away the mass market and limit demand, Waltzer believes the new glasses can have a measure of success. “With a limited release, we expect the small production batches to sell through to consumers.”

“We’re talking tens or thousands of units in a year — and most of those are aimed at the commercial market,” he told TechNewsWorld. “On the consumer side of things it’s almost nonexistent.”

It just might be that Snap is establishing its bona fides in the market before it starts to take off.

“In that context, it may not be a bad idea for Snap to position itself as a player in this space,” he said.

Snap also could be positioning itself to catch the AR wave should a big player enter the market in a big way.

“We predict a high-profile product launch from Apple in the next one to three years will likely be the catalyst to bring smartglasses to mass market consumers,” Waltzer said.

Healthy adoption of smartglasses by consumers will take place in the next three to five years, Abbruzzese predicted.

“Apple’s impact on the consumer market — even without any confirmed device — can’t be understated,” he said, “and much of the potential market size and outlook is up to them and their competitors on what they launch and what use cases surround it.”