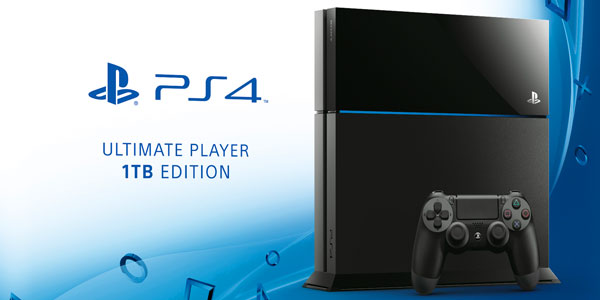 Beefed up and slimmed down, the new 1TB PlayStation 4 Ultimate Player Edition (UPE) is scheduled to arrive in Japan before this month concludes and then launch in the UK in the middle of July, Sony announced on Sunday.

The revised console, bearing twice the storage capacity of its predecessor, will arrive in the U.S. somewhere inside of the two weeks that follow its July 15 launch in the UK.

Along with doubling the storage capacity of the original PlayStation 4, the Ultimate Player Edition of the console is about 10 percent lighter and consumes about 8 percent less power.

The lighter, roomier PlayStation 4 UPE, with its sleeker chassis, serves as Sony’s answer to the 1TB edition of Microsoft’s 2015 model year Xbox console, which rolled out earlier this month. With the launch of the 1TB version of its latest console, Microsoft slashed the MSRP of the original Xbox One to US$349.

Sony hasn’t offered any pricing details for the original or UPE PlayStation 4, deferring to local retailers, which affects the “competitive situation with Xbox one,” according to George T. Chronis, director of Qualitative Analysis at DFC Intelligence.

Price cuts and game bundles typically have been the leading competitive strategies for Microsoft’s XBox One.

“If both consoles are priced the same, will consumers choose the Xbox One instead? That has not been the case so far,” Chronis said. ” Halo 5 is the kind of title that can add significant value to the Xbox One — but is that enough?

Anything You Can Do…

The Ultimate Player Edition of the PlayStation 4 effectively levels the playing field between the Xbox One and PlayStation 4, noted Matt Woodley, a partner at Tenshi Partners.

“We don’t know the commercial details yet, so this can only be seen as positive move,” he told TechNewsWorld.

It’s always nice to see refined versions of consoles, with minor improvements and sleeker form factors. The purchase of either console, however, will be based on price, content, brand loyalty, user experience and functionality, said Woodley.

The “important thing is that the functionality is proven to work for gamers and developers, so there is no need to change other aspects right now,” he pointed out. “The memory is enough. It is keeping the console fresh and cutting-edge.”

When the Ultimate Player Edition of the PlayStation 4 begins to roll out, some of the original early adopters of Sony’s eighth-generation console likely will begin listing their older hardware on eBay, said Woodley — and that’s just another segment in a loop that looks like it will continue to spin forward towards the end of this console cycle.

“The 1TB console will, though, likely become the standard size within a year — so don’t be surprised if we see a 2TB one this time next year,” Woodley added. “Expect this machine to be the one pushed to the mass market this holiday season with promotional callouts to the benefits of the space for movies — as well, of course, as for games.”