Sony’s Many Flavors of 3D

Last year’s CES was 3D TV’s great big debutant ball. The world wasshown something kind of cool-looking and told, This is the futureof home entertainment! Behold! Everyone oohed and aahedappropriately, then went out and bought tablets.

It’s OK that 3D TVs still aren’t exactly commonplace in the typicalAmerican living room. They’re expensive, there’s still relativelylittle 3D content, and you have to spring for a special pair ofglasses for everyone in the room.

And replacing a large TV for anyreason can be kind of a pain. It’s this big, bulky thing that youcan’t (read, shouldn’t) just toss into a dumpster. It’s almost likegetting rid of a refrigerator — most people only upgrade when there’ssomething very wrong with the one they have now, and not doing 3Ddoesn’t quite qualify as “wrong” yet.

Even though 3D TV still might have a long road ahead of it, Sonyis jumping into the concept with both feet. Nearly half of its massivebooth at the Consumer Electronics Show is devoted to 3D technologies.What Sony has on display goes beyond the standard sort of 3D thatearly adopters have put in their homes in the last 12 months, and someof it may never actually reach production.

There are at least four flavors of 3D to be found in Sony’s CESencampment. Perhaps the most prominent is the massive,super-wide-screen video that takes up the entire wall at the back ofthe company’s booth. Sony reps were passing out free 3D glassesThursday so attendees could watch a short demo without getting asplitting headache.

This variety of passive 3D uses inexpensive, polarized glasses to showeach eye a different image. It’s the same technology used at mostmovie theaters. It’s good for allowing large numbers of people to seethe same show without laying down five figures just for glasses, butcritics of the 3D movie craze say it cuts down on the brightness oneactually sees from the screen and turns the image into a murky wash.

Another variety, active-shutter 3D, is what’s used in most home 3DTVs. The image on the screen alternates between two slightly differentpoints of view over a hundred times per second. Meanwhile, the lenseson the glasses you’re wearing alternate between transparent and opaquein sync, giving each eye its own set of images.

Active-shutter glassesper se may not get you around the dimness problem 3D movie criticscomplain about if you’re using them with a rear-projection TV, butoften they’re combined with flat-panel LCDs. Pumping out more lightfrom behind the TV screen, perhaps with an array of LEDs back there tohelp out, can make this sort of 3D appear much smoother, brighter andmore colorful.

Still, those shuttering glasses are pretty pricey, especially sinceeveryone in the room has to have a pair. The third flavor displayed atSony’s booth uses no glasses at all.

First was a portable 3D Blu-ray player with a 10.1-inch screendisplaying at 1,366 by 768 resolution. This thing drove me nuts. Theslightest movement of my head killed the 3D-ness of the image, andsometimes the depth almost seemed reversed. Color looked drab. And theplayback also seemed choppy, though I don’t know whether that problemhad anything to do with its 3D technology.

Next was a 46-inch model displaying at 2,000 by 1,000. Perhaps it wasbecause the larger screen was playing in a darkened room (rather thanunder harsh show lights like the 10.1-incher), but the color andconsistency of on the larger screen were greatly improved. Then it wason to a 56-inch set at 2,000 by 4,000. Even better.

However, the depth of field in all three autostereoscopic TVs, eventhe largest one, didn’t appear to quite match up to an active-shuttersystem. Also, the audience in each room was carefully made to standseveral feet back from the set and look from a fairly straight-onangle. Due to the way they send images in different directions, theseTVs probably have next to no visibility when looked at from widerangles.

Finally, a fourth breed of 3D found at Sony’s booth involves strappingon a piece of headgear that’s half Daft Punk, half circa-1992 virtualreality getup. The so-called 3D Head-Mounted Display (also a “futuretechnology”) gets around the problem of having to make one screen showtwo images by taking two screens and shoving them right up to youreyeballs.

The results left something to be desired. Maybe I just don’t likefocusing on things that close to my face, but after 60 seconds my eyeswent bleary.

Also, when pressed up this close to the screen, I became very muchaware of how your focus is totally at the mercy of thecinematographer. For some reason, this is perfectly fine when watching2D content, and it’s not really a problem when observing 3D from adistance. But here you’re looking at a 3D image while your eyeballsare locked inside this little cage with two tiny TVs … thecinematographer suddenly pulls focus away from something you wereconcentrating on, and it almost feels like something snaps. Like youjust tore an eye tendon.

I was able to get in a few minutes of “Killzone 3” using a 3D set aswell as PlayStation Move, the system’s motion controller. The resultswere impressive — good control, good depth, but perhaps a little dark.Then again, this was “Killzone,” not “Super Mario Bros.” Kind of anall-around dark game. 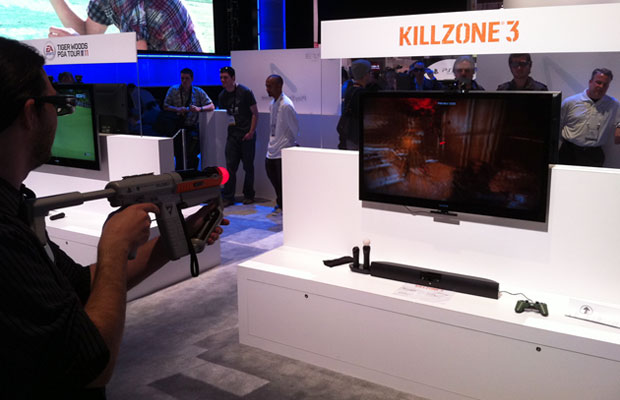 Finally, Sony’s made it possible to make your own 3D movies with theHDR-TD10 camcorder, which records in full HD.

Judging from the monitors providing instant playback, the HDR-TD10does a fine job of capturing 3D home videos. But I just could notagree with the in-camera display panel. It’s supposed to let you viewthe action in 3D without glasses, just like some of the TVs mentionedabove. Try as I may, I could not achieve a viewing angle thataccomplished this. It was either a gray wash or some kind of oddlyaskew image that made my eyes feel crossed.

Luckily, the camera’s display can be set to regular old 2D mode.