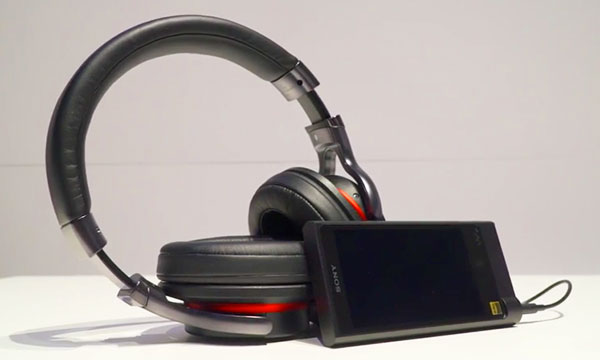 Sony on Monday debuted a new Walkman at CES that’s as notable for its hefty price as for its high-end features.

Listed at US$1,119.99, the new Walkman NW-ZX2 is several hundred dollars more than last year’s Walkman NW-ZX1. In return, it promises “high-resolution audio like never before,” thanks to Sony’s new S-Master HX digital amplifier — designed to reduce distortion and noise while maintaining the purity of the original sound — and DSEE HX technology, which enables the production of higher-quality sound from lower-quality streaming sources.

The new Walkman is due this spring. Also in the audio realm, Sony on Monday unveiled its new MDR-1ABT Bluetooth Headphones, PHA-1A headphone DAC/amplifier, and a high-resolution car audio receiver.

“We have been focused on developing products that will reproduce the ultimate sound quality from any location,” said Mike Woulfe, senior vice president of sales and marketing for Sony Electronics’ Sound Division. “Sony’s new portable audio line-up represents a new music experience for consumers where environmental restrictions no longer exist, and they can freely enjoy the best music, regardless of where they are.”

A Shift in Direction

The new high-resolution Walkman is “more a strategic brand-positioning move than anything else,” said Steve Blum, president of Tellus Venture Associates.

The device is clearly aimed at high-end audiophiles and “conspicuous consumers,” but “the news is that they’re trying to position themselves for that segment in the first place,” Blum told TechNewsWorld.

“Sony’s reputation for producing premium products has all but disappeared over the past 20 years, and introducing the high-resolution Walkman is an effort to reclaim it,” he added.

Up to 60 Hours of Playback

The Walkman NW-ZX2 sports a rigid case and a frame with rounded sides made from aluminum alloy. Contributing to its high-quality sound are an enhanced power supply and thick-film copper-layer PCBs, OFC cables, and high-purity lead-free solder, Sony said.

Compatible file formats are MP3, WMA, AAC, FLAC, AIFF, WAV, DSD and Apple Lossless. The device offers up to 33 hours of high-resolution playback at 192 kHz/24 bit. With MP3 files at 128kbps, users can expect up to 60 hours of music playback per battery charge.

Included with the unit are 128 GB of built-in memory along with a micro-SD card slot, WiFi, and a large capacity Lithium-ion battery. The ZX2 is equipped with Android 4.2 and is compatible with the Google Play Store.

Impressive though its capabilities may be, it remains to be seen whether Sony can set its new offering apart in the crowded audio space, said Jim McGregor, founder and principal analyst with Tirias Research.

“While it may provide the ultimate audio experience, I doubt many consumers will be interested in another device, especially when the technology in the devices we carry and use everyday continues to improve,” he told TechNewsWorld.

“I think it’s a high-end niche product looking for a market,” added McGregor. “Maybe the price tag reflects the limited number of units they expect to sell.”

Dating back to 1979, Sony’s Walkman line has gone through considerable transformation over the years, evolving with technological and market changes from audio cassettes to CDs, video and phones, and most recently to MP3 and other digital audio formats.

It also offers additional opportunities for Sony to market and sell its audio headphone products, he told TechNewsWorld.

The device certainly targets a limited audience of audiophiles, Orr observed. What remains to be seen is, “how will Sony reach this audience?”