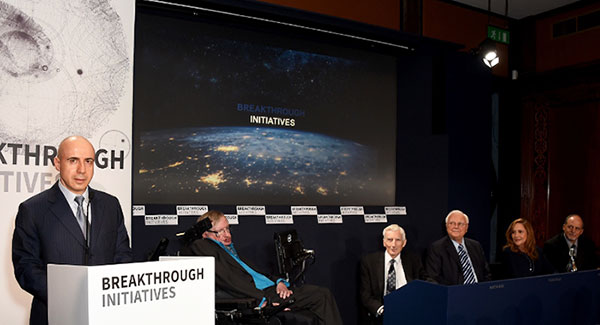 Space fever seems to be catching on. Stephen Hawking and a group of other high-profile space scientists joined with Russian billionaire Yuri Milner this week to announce a new US$100 million effort to search for intelligent alien life.

The move comes as NASA continues to release stunning photos of Pluto captured by the New Horizons space probe.

Breakthrough Initiatives is a 10-year multidisciplinary effort that consists of two parts.

The first, Breakthrough Listen, will harness the world’s largest telescopes to mine data from the nearest million stars, the Milky Way and 100 galaxies.

It will have access to two of the world’s most powerful telescopes: the Green Bank Telescope in West Virginia, which has a lens 100 meters in diameter; and the 64-meter-diameter movable dish telescope at the Parkes Observatory in New South Wales, Australia.

It will scan at least five times more of the radio spectrum, 100 times faster.

Listen will undertake the world’s deepest and broadest search for optical laser transmissions in tandem with the Automated Planet Finder Telescope at the Lick Observatory in California.

Come Out, Come Out, Wherever You Are

Breakthrough Listen will survey 1 million of the closest stars to Earth.

It will scan the center of our galaxy — the Milky Way — and the entire galactic plane.

Breakthrough Listen’s telescopes can pick up transmissions from the center of the Milky Way with more than 12 times the output of the interplanetary radars we use to probe our solar system.

The program also will listen for messages from the 100 closest galaxies.

Its telescopes will be able to pick up transmissions with the same power as aircraft radar from a civilization based on or around one of the 1,000 stars closest to Earth.

The optical search will be able to detect a 100 W laser — that’s the energy output of a normal household light bulb — from a star up to 25 million miles from us.

All data generated will be open to the public, and the Breakthrough Listen team will develop powerful software to analyze it.

The second initiative, Breakthrough Message, will fund an international competition to generate messages representing humanity and planet Earth that someday might be sent to other civilizations.

The odds of finding anything through listening are “one in many tens of millions,” said William I. Newman, professor of Earth and space sciences at UCLA.

“You have to be listening at the right time, with the right frequency, and in the right sector of space,” he told TechNewsWorld.

Even if we should hear something, the information may be outdated, because “the time needed for radio waves to traverse the diameter of our galaxy is measured in hundreds of millions of years,” Newman pointed out. “That’s a long time to wait for a callback.”

A discovered civilization likely would have undergone biological, sociological and cultural changes during that period, or perhaps even gone extinct.

Nonetheless, “the unknown is the very thing that drives advancements in science,” pointed out Jim McGregor, principal analyst at Tirias Research.

“If they have the interest and the funding, why not? What have we got to lose?” he asked.

Much has been written about the possible impact of contact with extraterrestrials, and some, like Hawking, have voiced fears that an advanced alien civilization might happily eradicate humanity.