The Earth Is Moving Under the Smartphone Market

One thing that Apple made clear when it took the smartphone market by storm and away from then-dominant players Palm, BlackBerry and Microsoft is that to win you need to make big bets and change the battle. The market is now dominated by Apple and Google technology — much of which Google doesn’t control — and Microsoft just swapped CEOs because the old CEO couldn’t pull the needed rabbit out of his hat.

Well Microsoft caught a number of us by surprise and actually announced some really interesting stuff at its Build conference last week. Those announcements point the way to what eventually could be an iPhone-like game change in the market that could put Google and Apple on the wrong side of the next trend.

I’ll close with my product of the week, which has to be the new dual-SIM smartphone from Nokia.

What was at the core of the Apple revolution in smartphones was an effort to get people to think differently about their smartphones. Before the iPhone, the big players focused mostly on business; the phones were really good at communications but kind of sucked for anything approaching recreation.

Apple tossed phone features into an iPod and showed folks their phone actually could be a ton of fun, and it flipped the market. In an amazingly short period of time, it went from being a non-player in smartphones to being the one everyone followed.

Google and Samsung basically copied Apple and made their devices available at carriers where iPhones weren’t offered and at prices well below the iPhone, and they stole the market from Apple — which is why Apple has been fighting Samsung in court — but it was Apple that flipped the market, not Google, and the flip took out Palm and turned BlackBerry and Microsoft into underdogs.

In the process, however, business got overlooked — but businesses still play a massive part in smartphone use and are the source ofr much of the related revenue. Allegations of government snooping and smartphone thefts have resulted in renewed demands for management and business capabilities, suggesting that the device that better balanced consumer use with business could flip a major part of the market back, at least partially, to the old business-focused model.

One other trend I’ve noticed is that more and more of my peers — many focused on the client side of technology — are now carrying Nokia phones because of their unique appearance and other advantages. These advantages include better cameras, better editing apps, and rather impressive battery life.

I got a chance to talk to a number of these Windows Phone users over the last week and their experience has been similar to mine. The phones run most of the apps we use, do some critical things better than an iPhone, and aren’t as risky as an Android phone.

Don’t get me wrong — there are still a lot of my peers on Android and the iPhone. However, where they were seen as the leaders of change in the past, they now look a bit like the laggards — particularly those using iPhones, which look incredibly out of date against the current generation of large-screen products from both Android cellphone companies and Nokia.

The big announcements from the event were, first, that apps created for one Windows class, like the Windows Phone, can easily be ported to tablet and PC platforms. This is a huge advantage for developers who want to reach the most users. They get a common canvas so they don’t have to do much additional work to get their apps to function on this wide variety of system types.

An even bigger announcement was the introduction of dual-SIM support. This is actually incredibly useful, whether you are moving between countries or want to use the same phone for personal and business purposes. For folks who have to carry multiple phones, this should be particularly appealing, allowing them to get rid of the redundant phone and make it easier to avoid roaming charges for outbound calls when traveling.

My favorite announcement, however, was the debut of Cortana, which may have set off an arms race to see which company can create the most capable assistant. Cortana is far more advanced than Siri or Google Now. Having come from the Xbox game Halo, she already has an interesting backstory and, I understand, delivers some responses directly taken out of the game. What makes her better than the rest, though, is that she represents two decades of work on creating a digital assistant, and you’ll be surprised at what she can do.

Finally, Microsoft has refocused part of its efforts on business, with improvements to security and manageability, through the creation of a business partition that better protects business information. As with BlackBerry’s platform, security is designed in at the start and is not an overlay, which should give Windows Phone a huge advantage against Android solutions like Samsung’s Knox.

One interesting side note is that on the panel at the analyst presentation, the IT guy kept saying “awesome” when referring to a new Windows Phone feature. For instance, the OS automatically, in the background, connects apps that need a VPN through the phone’s VPN — you don’t have to launch it separately and then wonder why the rest of your apps stopped working. You hear that word often with a Windows phone — but, hell, that was kind of awesome.

I’ve said “finally,” but there actually were a lot of other things announced — I just covered the ones I found most interesting. I think Microsoft is on track to create something amazing — which is good, because I’m a long-time Windows Phone user myself — and, you know, we are kind of due for something amazing.

Wrapping Up: The Future

I think we can see the future emerging. With companies like VCE working on telephone convergence, virtual business phone systems will emerge that use multi-SIM phones as their default clients. In effect, your cellphone finally will replace that ancient wired phone on your desk and in your home.

The movement between text, voice and video communication from one-to-one to conference and one-to-many calls will be more seamless and linear. In the future, you may be talking, texting, collaborating with, and seeing an increasing variety of folks real time in an integrated fashion.

The move to virtualization will better support moving your apps and your phone personality not only from phone to phone on the same platform, but also from platform to platform. It goes without saying that you’ll have tons more bandwidth and far better connectively (Qualcomm is driving much of that at the moment).

AIs like Cortana will evolve into far more comprehensive and capable assistants. Oh, and our phone may end up on our wrist, on our face, or embedded in our body — but this last is, fortunately, still some time off.

For now, Microsoft has made some bold steps. It clearly will need to go farther, but it is just as clearly on the right path. If Microsoft’s new CEO can deliver on his promise of creating a Microsoft that fights as a company, then the next-generation phone solution — which will start with the cloud and end with the client and truly be awesome — will come from Microsoft. We’ll see…

Product of the Week: Nokia 630

For any big OS announcement, there is a poster child phone — and for this one, it’s the Nokia Lumia 630. This is the first phone to release around the updated Microsoft platform and the Cortana assistant, but its big claim to fame is that it has dual SIMs, showcasing the ability to jump between countries without roaming charges or to have one phone take the place of two for those who have to have separate personal and professional phones. 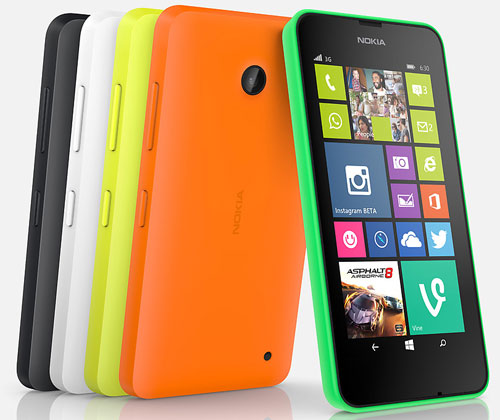 One of the big things for this phone has nothing to do with the platform, though, and it is the ability to swap out the shells so you can customize the phone to your changing tastes. This is something that was incredibly popular with older Nokia phones, and there once was a huge market for third-party cases that were tied to movies, sports teams, colorful designs or finishes. Nokia is once again opening the potential for massive customization, and it should be as popular again as it once was.

Because the Lumia 630 mixes what is new with what has worked incredibly well for Nokia in the past and is a nice flagship product for the Windows Phone changes, it is my product of the week.