The End of Silicon Valley

If you haven’t read last week’s Vanity Fair article on the institutionalized sexual exploitation going on in tech companies, you should.

This is on top of the realization that social media companies like Facebook are destroying the U.S., and former Facebook executives have been dissociating themselves from the company.

Further, news recently broke of what initially was reported to be an Intel flaw, but turned out to be a bigger industry-wide problem. Behind it was the report that Intel’s CEO dumped every share he legally could during the period when Intel knew of the problem but had not reported it. This may be an optics rather than an insider trading problem, but it does imply a severe lack of confidence in Intel’s future on the part of its own CEO (though it may be just a lack of confidence in the Trump administration).

I think we may be looking at a potentially catastrophic collapse of Silicon Valley. Given that the Valley supports the Democratic party almost exclusively, it doesn’t bode well for the 2018 mid-term election — which, before this, was expected to be a Republican rout. Individually, each of these events is bad. Collectively, they are catastrophic.

I’ll share some thoughts on that this week and close with my product of the week: an interesting way to keep your outdoor spa both warm and accessible during the winter months.

The Sport of Extreme Sexual Harassment

Recall that Harvey Weinstein reportedly abused a lot of women before one spoke up, and the entire thing cascaded until he lost his job, his company, and his position on boards. The father of one of his accusers reportedly even threatened to kill him. A parent’s reaction to this kind of behavior, as Sorvino demonstrates, takes anger to the extreme. The Democrats, who have a zero-tolerance policy regarding this kind of thing, likely will run from these folks like they have the plague, and the Republicans have no love for the Valley in the first place.

All it would take is a trigger event — say an underage woman alleging drug-induced rape at one of these parties, or a Justice Department raid (or both) — to cost most of these folks their jobs, companies and much of their net worth. Granted, many likely could get on their jets and avoid immediate arrest, but you don’t recover from something like this. Just ask Roman Polanski. People don’t forget this kind of thing (but they all could move to Switzerland).

From women who are abused through this practice, to politicians who want to gut Democratic Party funding, to law enforcement that wants to stick it to rich jerks who are abusing the law, to countries like China that would love to cripple Silicon Valley, the number of people who might use this to cripple the U.S. tech industry are legion.

When executives start treating past jobs as if they were criminal activities, it’s a sign of a serious problem. The combination of a growing realization that Facebook is doing massive harm to the country with ex-Facebook executives treating their time there as if they had a substance abuse problem suggests things aren’t looking good.

There already have been a massive number of social media-fueled tragedies, including suicide and murder. Just last week, a YouTube star became infamous for showing the body of a suicide victim in a video.

Given that I was almost killed myself during a rave organized on Facebook, I’m very aware of the risks surrounding the use and adverse impact of social media.

Personally, I find social media to be way too dangerous — particularly when it looks like your job prospects could be killed over posts taken out of context. The amount of false (fake) news generated on these platforms is incredibly troubling, and I find the arguments that social media didn’t corrupt the elections to be so poorly researched as to be laughable.

The realization that a poorly worded tweet might start a nuclear war doesn’t let any of us sleep very deeply now. (The idea of buttons on desks that could launch nuclear payloads is just wrong in so many ways.)

Maybe the words that will doom the world will be: “Damn it I told you not to put my breakfast on my desk, you’ve just launched World War III you covfefe!” In case you wonder what that word means…

The problem with the Intel chips being a manufacturing defect of some kind appears to be fake news (though the Linux folks are less than amused), but selling every share you legally can sell during the window between when Intel learned of the problem and when it was disclosed appears not to be.

This leaves us with two possible obvious choices, both of which are bad. Either Krzanich sold the shares to make sure he didn’t take the loss (insider trading), or he lost confidence in Intel’s ability to execute. My guess is that this likely had nothing to do with Intel at all, but with concerns that the market is going to correct massively when the U.S. president is indicted. (Krzanich was one of the early CEOs to abandon the president.)

This is a reminder of how important optics are, but the appearance of wrongdoing or lack of confidence in his firm adds to the overall impression that the valley is about to implode. Much of the valuation of a company is based on confidence in it, and if the CEO doesn’t have confidence, regardless of the performance of the firm, investors, employees and customers won’t either.

You can kill an industry or company with bad optics.

In the post-Weinstein world, the idea of group sex parties with subordinates and drugs alone seems just nuts — but on top of that, the ability of the U.S. or a foreign government to use these things effectively to wipe out much of the market is unprecedented. In some strange way, you can almost hear Harvey Weinstein say, “I was stupid and bad, but I wasn’t THAT stupid and bad.”

Then layer on the massive damage social media is doing to the country — damage that has caused executives to detach themselves from their own company backgrounds — and you get what could be termed a “suicidal complex.”

Finally, if you look at what one of the most powerful CEOs just did with his own shares… well, while any one of these things would be bad individually, collectively they provide a picture of a segment that is behaving suicidally.

We thought 2018 was going to start with a bang, but I doubt that any of us were thinking that it would be the sound of the tech segment imploding.

My wife and I have a swim spa, which is basically a swimming treadmill. The problem last year was that it snowed so much, we often couldn’t open the damn cover to get into the thing — it was covered with snow. Even when it wasn’t, running around in a wet bathing suit trying to close the thing back up again when done was a nonstarter after the first time.

Finally, this spa is big, so the cover was heavy all by itself, and my wife had issues both getting it open and closed, so the spa basically would sit out the winter, which is when you kind of need to be able to use it. We needed something that handled the snow, was far easier to open and close, and didn’t require you to run around the pool in near zero-degree weather while wet to close it up again.

What I found was the Covana Motorized Spa Cover. This isn’t a cheap date, but it powers up and down, and it has the added benefit of not only being able to lift a lot of snow but also providing a cover for you while you are swimming or using the Jacuzzi side of the spa. 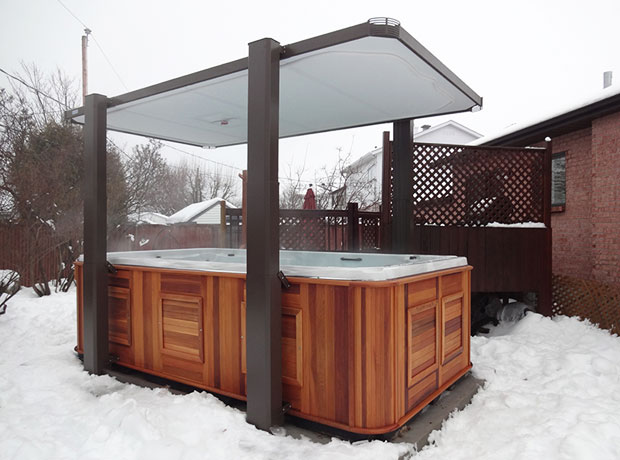 Covana also makes smaller versions for hot tubs, and one of them has internal lights, privacy curtains, and a peaked roof that allows the snow to slide off.

It uses a solar-charged battery, so it is surprisingly easy to wire up (though you typically would have it professionally installed, which is what we did). We’ve been using it for a few weeks now and love it — not to mention it looks cool opening and closing, though I think I’ll rig a remote switch, so I can do that from inside the house.

One interesting feature is the escape hatch, in case someone closes the spa while you’re in it (which could come in handy with that remote switch). We all need to exercise more, and part of the fun of a hot tub is using it in the snow. However, the power bill for leaving it open takes a lot of the fun out of it. The Covana motorized spa cover does both (we got the Legend), so it is my product of the week.

Rob Enderle has been an ECT News Network columnist since 2003. His areas of interest include AI, autonomous driving, drones, personal technology, emerging technology, regulation, litigation, M&E, and technology in politics. He has undergrad degrees in merchandising and manpower management, and an MBA in human resources, marketing and computer science. He is also a certified management accountant. Enderle currently is president and principal analyst of the Enderle Group. He formerly served as a senior research fellow at Giga Information Group and Forrester. Email Rob.