The concept of “the funnel” is a sacred cow in marketing. The basic concept of leads progressing through a series of steps of escalating interaction until they finally make a purchase is intuitive.

At the macro level, it is fairly easy to model the funnel and assign labels to each step — awareness, interest, consideration, evaluation, commitment, advocacy, etc. However, the model’s accuracy decays rapidly when marketers attempt to predict the behavior of their prospects by cutting each step into ever smaller slices.

The primary reason for this decay is how we visualize a funnel based on the two-dimensional illustrations found in marketing textbooks written decades before the Web even existed.

Two-dimensional funnels shown from a side view suggest that you can identify a linear series of steps leading up to a sale. However, anyone who has tried to model an organization’s funnel can tell you that trying to define the path of a prospect at a granular level is an exercise in futility.

Does a prospect watch a webinar before or after inquiring about pricing? Does a prospect view a demo before or after signing up for a newsletter? Unlike many other forms of communication, the Web is an inherently user-driven medium that defies marketers’ attempts to dictate user experience. No single path even remotely represents prospects’ series of interactions accurately.

Does this mean that the funnel model of engagement is an illusion? No, but it means that if we want to model the granular behaviors of prospects within the funnel, we need to look at the funnel from a different perspective, literally. If we abandon the two-dimensional model and instead view the funnel as if we are standing in front of the mouth and peering inside, we will see that each of the steps drawn on the two-dimensional funnel now appear as concentric rings, much like a target.

Each ring represents a certain degree of engagement based on the level of effort required by the prospect. The amount of effort a prospect is willing to devote is a reasonably reliable indicator of interest. 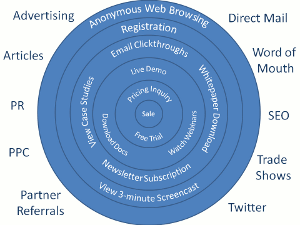 We can still apply a traditional funnel label for each ring (e.g. consideration), but in addition, we must define the interactions reflecting that label (e.g. download documentation, view live demo, watch webinar).

Measuring the number of prospects who graduate from ring to ring, as well as identifying which interactions within a given ring result in abandonment, will help us to refine our content or activities to remove friction from the funnel and drive more conversions — and, ultimately, more revenue.

If we use a marketing automation solution, the rings can also be used as the foundation for both lead-nurturing and lead-scoring configuration. Lead scoring is typically governed by a set of independent custom rules based on profile data or behavioral data. Like so many things, the most challenging aspect of lead scoring is getting started.

Simply create a rule for each interaction shown in the rings of our new funnel. As we move deeper into the rings of the funnel, each rule is assigned a higher score. Of course, this approach isn’t perfect, because some key buying signals may require a relatively low amount of effort on behalf of the prospect. However, these adjustments are a natural part of the “execute, measure, refine” methodology that should dictate all marketing efforts.

To get the most out of your lead-scoring system, you should also add rules that evaluate how closely the prospect matches your ideal profile — e.g., Does prospect’s vertical industry match your target industries?

Likewise, the new funnel diagram can be used as the basis for lead-nurturing programs and personalization. Start by identifying and tracking on which ring each prospect resides. Then, build a lead-nurturing program for each ring that highlights the interactions found on the next ring of the funnel.

Ideally, we would have at least three interactions on each ring so that we can spoon feed them as a “drip” campaign over time. We can also personalize this prospect’s Web site experience by dynamically inserting these next interactions (e.g., whitepaper, screencast, demo) directly into the pages of our Web site, based on the prospect’s current ring. These tactics can be used individually or in concert to encourage prospects to graduate to the next stage of the funnel.

Avoid turning your funnel model into a black hole — from which no productivity can escape — by resisting the temptation to slice your funnel into too many rings. Most organizations’ funnels will consist of between four and eight rings, each ring consisting of interactions requiring at least double the effort of its predecessor.

Use these funnel rings as the basis for your lead-scoring rules and lead-nurturing efforts. Most importantly, don’t forget that the funnel is a model that attempts to emulate the natural progression of your prospect’s engagement cycle. In order to be successful, you must accept that this model will need to evolve and adapt as you learn more about your prospects and your business.

Commit to measuring, monitoring and reviewing the progress of your prospects through this funnel and revising your model appropriately as you gain insight.

Matthew Quinlan is the vice president of field operations at LoopFuse, which provides an on-demand service designed to close the loop between sales and marketing.
Get Permission to License or Reproduce this Article

Revenue Without Borders: How to Fix the Sales and Marketing Cycle 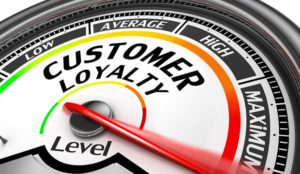