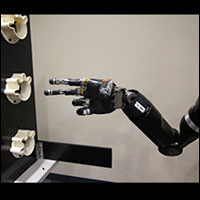 Jan Scheuermann, a quadriplegic, in 2012 was able to use her thoughts to flex the wrist of a new mind-controlled robotic arm in a project run by the University of Pittsburgh School of Medicine.

Scheuermann earlier this year demonstrated her ability to use her thoughts to move the robot hand into different positions while controlling the wrist and arm.

However, the school recently closed down the project.

Scheuermann could make four distinct movements with the robotic arm’s hand: finger abduction, or spreading out the fingers; scoop, in which the last fingers curl in; thumb opposition, which consists of the thumb moving out from the palm; and pinching the thumb, index and middle fingers together.

Mastering these four movements gave Scheuermann control of the hand in 10 dimensions.

“We hope that this technology will be feasible for use at home,” senior investigator Jennifer Collinger, assistant professor of physical medicine and rehabilitation at Pittsburgh U., told TechNewsWorld. “That might take another five or 10 years.”

In 2012, two electrode grids with 96 contact points each were implanted in Scheuermann’s motor cortex, which controls voluntary movement. Cables running through two ports in her skull linked them to a computer when she was hooked up to the arm.

Each electrode picked up signals from one neuron.

Brain signals generated by Scheuermann while watching animations and imagining the movements were recorded and fed into the computer to identify the firing patterns associated with particular observed or imagined movements.

Within a week, Scheuermann could reach in and out, left and right, and up and down with the arm, giving her three-dimensional control. Within three months, she added flexing the wrist back and forth; moving it from side to side; rotating it clockwise and counter-clockwise, and gripping objects, to give her control in seven dimensions.

The arm was developed by Johns Hopkins Applied Physics Laboratory.

The grids were surgically removed from Scheuermann’s head in October.

“This was a study to see whether the technology could work,” Collinger said, “and from the beginning, it was planned to be of a limited duration.”

Deterioration of the signals could be one reason for the limitation.

The implants recorded fewer signals over time — partly because the brain is a hostile environment for electronics, and partly because tiny movements of the grids may build up scar tissue, according to the MIT Technology Review.

Scheuermann apparently had lost the ability to open and close the hand’s thumb and fingers, and was able to control the arm only in three to five dimensions by the project’s conclusion.

“She continues to have quadriplegia,” Collinger said. “The grids did not restore movement of her limbs.”

The U.S. Food and Drug Administration approved the “Luke” prosthetic arm in May.

Then there’s the Brown University-directed BrainGate 2 project: One participant in 2012 used her mind to get a robot arm to fetch her a cup of coffee.

However, the technology is “very complex and expensive” and needs to be trained to the needs of each user, said Venkat Rajan, principal analyst for advanced medical technology at Frost & Sullivan. There is no way of mass producing devices that would meet all users’ needs.

Another hurdle is that the technology “would need to be wireless, durable and easy to set up on a daily basis,” Collinger said.

The arms currently in use don’t satisfy those requirements.

Still, the concept of robotic arms “has been around for a while, and some of the other technologies around it are getting better,” Rajan pointed out, “so you might get the right idea at the right time with the available tools at an affordable price to make it happen.”