The Next Generation of In-Car Entertainment

Over the next several months, we will see a massive step forward in the systems we use in our cars to connect to our phones, listen to music and watch videos. As I write this, the new Kenwood Excelon DNN991HD is being installed in my project car, and it promises pretty much everything but the kitchen sink. In August, Jaguar will start supplying a new AV system provided by Intel and compliant with Apple’s CarPlay system. This is on top of the driving improvements, which will include laser lighting, lights that make rain and snow almost invisible, and improvements in automated driving up to and including self-driving cars.

I’ll share some thoughts about what’s coming and close with my product of the week: the MyCharge Amp 6000 Power Bank.

In car audio visual technology has been a mixed bag for the last decade. A system is designed into a car almost at its inception, which typically makes it at least three years old when it shows up on a new car. Car companies rarely update the AV system, so that by the end of a model’s typical five-year run, it is as much as eight years old.

I remember driving a new Lamborghini a few years back and finding it had the same AV system as our old Audi TT, which was more than five years old at the time. All of the stuff like Bluetooth integration and navigation was way out of date — and while the system sounded OK, it really wasn’t competitive with what was shipping at the same time in mid- to high-end Toyotas.

I struggled to believe that anyone wanted to pay more than US$200K for a car with an out-of-date sound system. Then again, in an exotic, the engine is the sound system you are supposed to be enjoying — but even I get tired of listening only to an engine on an hour or more freeway drive. I belong to Club Sportiva and get to drive a number of true exotics (it’s a great way to have the feeling of owning lots of exotic cars like billionaires do without the cost or headaches). In general, the sound systems in many of these exotics are a decade or more out of date.

Back in the ’70s, you could easily update your stereo with a plug-in upgrade, but that stopped working a couple of decades ago when automakers got cute and decided to integrate them more tightly to the car.

The situation improved somewhat with the last generation of AV systems in cars, which did a better job of integrating your phone wirelessly to your stereo. You typically could pump your music and your phone features wirelessly to your car and control the tracks you listened to and handle your calls mostly while leaving your hands on the steering wheel.

Some cars have voice-command capability, but it is pretty rudimentary — and most systems still require you to learn the specific commands needed to operate the system. You can play DVDs now, if the car has that option, but only in the back seat or while the car is stationary — and even then, the video often won’t show up on the front screen.

The dedicated Apple cables went away (for the most part), and you could connect most phones to your AV system for both music and phone, and sometimes video. Backup cameras got better, and cars got both satellite radio and traffic updates — either standard with navigation or as an additional cost upgrade.

Toward the end of the cycle, cars started getting hard drives you could rip music to, and car makers started upping significantly the power of their systems (Jaguar’s premium system for its F-Type is 770 Watts), and doing creative things with speakers (Audi’s system has pop-up tweeters).

Things got a lot better, but replacing the stereo often got harder, suggesting we clearly had room for improvement. That improvement is coming first in the aftermarket and then built into cars that will shortly become more modular.

The DNN991HD is the first of the next generation of AV systems for cars. I’ll know later this week how much of what it promises actually works (there is some risk getting the first of anything, as promises often lead reality).

In this case, the feature list is pretty impressive: built-in Nuance speech recognition (think Siri); integration with your car’s systems (gauges, parking sensors, OnStar, etc.); WiFi Sync (it will connect to a WiFi hotspot for updates or to stream media); WiFi Hotspot (you can attach a 4G accessory, turning it into an in-car hotspot); connections and apps for most social media, calendar, and email programs; HDMI support so you can stream videos off your phone or tablet to the screen(s); and updated traffic reports including photos from nearby traffic cameras while you drive, to show you how bad it actually is. (Traffic in the Silicon Valley has gotten so bad recently the freeways for about six hours are basically short-term parking lots).

The gauge thing is actually pretty cool. If you’ve ever been in a Nissan GT-R, it was the first car with this capability. In the center dash screen, you could pull up a wide variety of gauges that both looked cool and impressed your passengers.

Jaguar Sync, due in August, goes beyond its current effort, which just connects the phone and music functions of your smartphone to the AV system.

Sync will allow you to push through apps, and that means you should be able to use the navigation system on your phone if you want. Waze currently is the best in market, and this would potentially put Waze on your screen rather than the default navigation application.

This also means your application and AV preferences move with you to other cars, along with your phone. Imagine getting into a rental and having all of your destinations, your address book, your music preferences, and even your music services from your phone readily available on your dash. This could lead to a whole bunch of new apps that you could run through your phone to your car — and this is all just the start.

There is a lot of cool stuff coming. Over the next few weeks, I’ll be trying some of it out and will tell you about it. Granted, first I have to get this new receiver in my car, but then comes the infrared camera. Infrared cameras allow you to see warm objects in pitch black light or through weather. They connect through your AV system to give you a look ahead and are particularly good at helping you avoid hitting animals and people.

Intel is pushing a system to market that allows a car’s lights to rapidly modulate based on sensors that see raindrops and snow. I’ve seen this work and it almost makes both disappear, so you get an unobstructed view.

Intel also is behind several efforts to significantly improve in-car entertainment. Nvidia is very active here as well, mostly with in-car entertainment, and it is aggressively behind the effort to modularize these systems so that they can be updated after you buy your car, and so dealers can do upgrades to stock so that you don’t buy a car with an out-of-date AV system anymore. (Currently Tesla leads, but Audi and BMW are close behind.) These improvements include virtual dashboards and advanced heads-up displays.

Of course, we already have self-parking, and Google has just started testing its self-driving technology in cities as the last big step before releasing this technology to the market. Some estimate that folks born next decade, at least in developed countries, will never learn to drive. (I could argue there are a number of people on the road now that are in that group, but let’s not go there).

Wrapping Up: Oh My

There’s also the coming laser headlights light tech — check it out, it’s wicked cool. I can’t wait until Cortana’s on board, which will be just a few weeks from now, after she gets her new/old voice. Windows phone users then will actually get an AI assistant in the car, and this is still just the start of what will be an amazing number of changes coming to in-car AV systems. They will become both increasingly connected and vastly more intelligent.

Personally, I don’t think I’m ready for my car to be smarter than I am, but I’m looking forward to the day when a cop comes to my front window and I say from the back seat “hey, don’t look at me, I wasn’t driving!” That day is fast approaching.

I was traveling back from Las Vegas last week, and my Kindle was nearly dead — I’d been watching some Netflix movies while I waited. In a panic, I went looking for a plug to charge from and everyone had one, two, or even three people in a similar situation sucking power to their starved electronic devices. Most of these folks were sitting uncomfortably on the floor. So I went hunting for a fix and found the MyCharge Amp 6000, which in the airport costs about $80 and on Amazon costs about $50 (suggesting you might want to buy one before you need it). 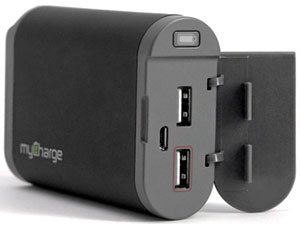 It gives an advertised 27 hours of additional power to your phone, and it took my Kindle from drained to full while I continued to watch streamed and stored content and played a considerable number of games — I was in the airport for more than five hours, thanks to a delayed flight.

It has two USB ports, so you can charge both your phone and your tablet at once. It uses the same cable you use to charge your phone to charge from — unless you have an iPhone, of course — and it weighs in at around seven ounces, so it isn’t too heavy. (There are bigger and smaller products available, but this size seems to provide the best balance between power and weight.)

Because the MyCharge AMP 6000 kept me from having to camp out at a power plug and run out of things to play with on the plane, it is my product of the week.