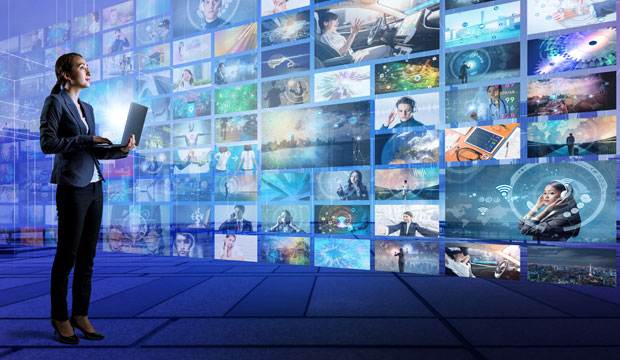 At Apple’s annual new products and devices event earlier this week, CEO Tim Cook told the crowd gathered at its Cupertino headquarters that the new Apple TV+ streaming service will be available for US$4.99 per month. Consumers who buy a new iPad, iPhone or Apple laptop will receive a year of the subscription-based streaming video service for free.

It was a shot across the bow at Disney, which recentlyannounced at its D23 event in Anaheim, California, that the Disney+streaming service will be available for $6.99 per month.

With its $4.99 monthly subscription fee, Apple is now the lowest of the majorstreaming content services — coming in at a dollar less than Hulu’s baseprice of $5.99 or Netflix’s basic service price of $8.99 a month.

Eighty-three percent of Americans now use at least one video streaming service, according to a recent survey conducted by ExpressVPN. Sixty five percent of respondents said they watched Netflix, while 41 percent regularly viewed Amazon Prime content, and 36 percent watched programming on Hulu. HBO Now came in at 13 percent, Showtime at 10 percent, and CBS All Access at 9 percent.

Fifty-five percent of survey respondents said they primarily streamed onliving room devices, including smart TVs or set-top boxes, while 20 percent of viewers viewed streaming content on a smartphone, and 17 percent on a laptop. Just 7 percent said they mainly used a tablet.

Although movies topped the list, the high interest in TV series — which couldinclude original as well as licensed shows — could be good news not only for Netflix and Hulu, which each have a large catalog of programming to complement their respective original content, but also for Disney.

Disney’s service will provide access to its vast catalog of movies, including the Marvel superhero films and the Star Wars franchise, as well as TV series.

This could explain why Apple is opting to lowball the competitionwith its attractive pricing. Apple TV+ will have original programming,but it is unlikely it will ever have the deep catalog of itscompetitors.

“They have no back catalog, while Netflix does, Showtime does, HBOdoes, CBS does,” noted Michael Heiss, principal analyst at 00000M. Heiss Consulting.

“Even a startup with the brand recognition of Apple might not haveoriginal content to grab people,” he told TechNewsWorld.

“Right now there are plenty of options left, and a significant pay-TVbase, but as that base winds downward, originals will become moreprominent,” he told TechNewsWorld.

Don’t Count Out the Movies

The draw of movies shouldn’t be underestimated. Pay-TV services such as HBOoriginally launched just to deliver the box office experience to thehome — hence the very name “Home Box Office” — and streaming of moviesvia services such as Netflix is what killed the video store.

The importance of movies varies a lot by services, observed DanCryan, principal analyst at MTM London.

“For some the importance of movies cannot be underestimated, as it iscore to their value proposition, while for others the value comes fromenabling binging of scripted shows, or offering live sport,” he toldTechNewsWorld.

“It’s dangerous to draw any conclusions from market-level consumptionto the programming strategy for an individual service,” Cryan added.

However, with a few exceptions, original series bring with themadvantages that don’t translate to movies.

“Most notably, the commissioning service generally claims a larger setof the rights of their original shows than they can for movies, wherethe rights look a lot more like a short-term rental,” explained Cryan.

“For services like Netflix, Amazon Prime, Apple TV+, this translatesto the ability to launch globally,” he noted. “By contrast, Disney+ islaunching in the U.S. and a limited number of countriesinternationally, because those are the countries where Disney has theability to stream its own movies. In other countries, Disney movies aretied up in multiyear high-value deals with local distributors.”

Streaming media continues to account for a large segment of allInternet traffic, but Netflix actually fell to the second-largest user of bandwidth, according to the “2019 Global Internet PhenomenaReport” from bandwidth-management systems maker Sandvine. Currently 60.6percent of total downstream traffic online is from video — up 2.9percent from 2018.

For years Netflix has been the biggest application in terms ofbandwidth consumption, notably at peak prime time hours, but itdropped to second place between Web-based media streaming apps. Netflixstill accounted for 12.6 percent of all downstream Internet trafficworldwide, which is just behind the 12.8 percent of other Internetmedia streaming.

“For the first time in years, the http: media streaming sucked morebandwidth than Netflix,” said Heiss.

“Things started out where it was Web apps, but then Netflix took overas being the largest application to consume bandwidth, but now it isswinging back,” he added.

“This is in part because so much content is being offered directlyonline from various content providers,” explained Heiss.

One factor noted by the Sandvine report is that Netflix didn’tactually see a drop in the amount of streaming — otherservices simply have increased. Moreover, Netflix has been creditedwith being very efficient in terms of video-streaming and thus eatsup less bandwidth than rival services.

With Apple TV+ and Disney+ entering the streaming market, the questionis, how much content can viewers actually consume? There is a finitenumber of hours in the day, and even those who binge the latestprograms can’t possibly keep up with everything!

Here too is where some services could falter, simply by not offeringthat must-see program — especially if the service is lacking in catalogcontent.

“The market can launch an unlimited number of services, but theirultimate success or failure is based upon their catalogs,” suggestedIHS Markit’s Brannon.

“Look at Netflix. It will be under pressure from several new high-power entrants: Disney +, the new Apple service, etc.,” he observed.

Netflix likely will be OK in the long run because of itsoriginals, but streaming services with adearth of first-run content may suffer, added Brannon.

Of course the key to success is profitability.

“If content can be had cheap enough to be profitable with a fewmillion subscribers, then a service will just carry on, business asusual,” said Brannon.

This could get more complicated, as CBS has its own streaming service,and its $12 billion merger with corporate sibling Viacom meansthat it will have access to the Paramount library of films and TVseries.

“Then NBC has access to Universal’s library, and we could see astreaming service for those specific films,” said Heiss.

That in turn might shrink the libraries of Netflix, Hulu and Amazon inthe process.

Moreover, “if first-run content is swept up in sister deals likeDisney+, or AT&T TV, there won’t be much content of any real qualityleft to be licensed,” said Brannon. “The exception to this example isof course the WWE, who has done a great job with their originals. Ithink WWE’s advantage was its brand, something that the smallerstreamers just don’t have.”

Where Sports Fits In

In addition to original TV series and movies there is live sports –and that could be another significant game-changer for streamingservices.

The sports streamed by viewers includedfootball at 76 percent, basketball at 67 percent, baseball at 52percent, soccer at 31 percent, wrestling at 28 percent, golf at 23percent, and ice hockey at 22 percent, according to ExpressVPN. It is sports that could result in a spike of Internet traffic beyond the evening prime time.

“Football is the natural leader in U.S. sports regardless of medium,and regarding weekends, the Saturday/Sunday dynamic is strategic sothat viewership and ad revenue can be maximized,” said Brannon.

For this reason football could find itself in the sights of streamingservices — just as networks once upped the ante to get the broadcastrights.

Streaming of major sports could be bad news for localbroadcasters, which in the cord cutting world have been left behind,apart from their ability to deliver local news and sports.

“There will always be some need for local news, but as far as sport isconcerned we’re in a ‘let’s not rock the boat’ phase of evolution,”suggested Brannon.

Other traditional carriers, including pay-TV services, aren’t likely tobe pushed to the sidelines either.

“The NFL still gets a great deal from DirecTV with Sunday Ticket. Idon’t see this changing any time soon,” noted Brannon.

“In the more long-term future, the NFL may indeed go direct toconsumer, but it has too much at this point to lose by ditching localbroadcasters, national cable networks and DirecTV,” he added.

“Sports typically have to walk a tightrope between the money they canget from subscriptions — either paid directly by consumers or via acable TV service — with the money they can get from advertising, andthe need to be easily accessible in order to maintain the fanbase forthe future,” said Cryan.

“Generally speaking, if everything goes behinda pay wall or moves onto a more expensive cable package, that willdent advertising and sponsorship revenue,” he added.

The streaming competition isn’t just about getting eyeballs to watch a program.

“Not at all — Apple TV+ is also very much a way to sell more devices,”said Heiss.

“The most telling part of the Apple announcement was not the monthlyfee, but the fact that it is free with a new iPhone, iPad or AppleTV,” said Cryan.

“Essentially Apple found a way to bundle the service, at least for thefirst year,” he added.

“At the same time, AT&T is aggressively bundling in video with some ofits mobile plans, and Amazon Prime is the bundle par excellence,”Cryan noted.

“In other words, what we’re seeing here is that video isincreasingly becoming about how they add value to other products andservices,” he said. “This means that in terms of subscriber numbers we arelikely some way from a tipping point, as consumers will gain access toa growing number of services even if they are not heavy users ofthem.”