TiVo has unveiled a new DVR that expands on its delivery of Web content while refining its interface for the high-def era.

The new Premiere units will record up to 150 hours of high-definition programming, but what’s most significant about the product launch is the expanded array of Web content available. New selections include the music servicePandora and Frame Channel, a service that funnels news and other content to Web-connected devices.

Other services already exist to bring Internet content into the living room, such as Boxee and other media extenders. However, TiVo — is known for drop-dead simplicity, and it’s familiar to a broad range of consumers. Its push in this direction could mean the promise of convergence of traditional network and cable content with Web content is at hand.

“TiVo is good at making things easy. I think it could make a lot more of this stuff go mainstream,” Rob Enderle, principal analyst with the Enderle Group, told TechNewsWorld.

The new boxes, which will sell for US$299 for 45 hours of high-def capacity or $499 for 150 hours, feature a complete redesign of the user interface.

Search functions combine broadcast and broadband content, and users can search by category or topic. The company also built the interface specifically for the larger real estate of high-defintion TVs, featuring two and three column layouts. 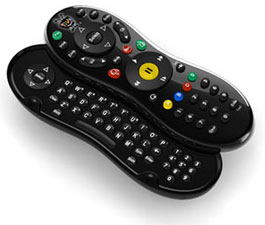 The software is built on Flash and a multicore processor, and is open to third-party development designed to extend the set’s capabilities, according to TiVo.

It features an onscreen space menu, a 30-second skip, and a new window that allows users to keep an eye on programming while moving through menus.

TiVo users will also be able to purchase a separate remote with a QWERTY keyboard designed to make interacting with the menus and Web content easier.

It’s Not the Hardware

The new box is a good step forward, said Tony Wible, director of media and entertainment for Janney Montgomery Scott.

However, it’s a mistake to continue looking at TiVo as a hardware company that provides DVRs to a fraction of the 33 percent of American households that have one, he said.

Instead, the company is transforming into a software services delivery company whose products will be built into an increasing number of set-top boxes from cable companies and other television providers.

“As that happens, I think you’re going to see a transformation in their P&L,” Wible told TechNewsWorld.

TiVo will likely lose money on the Series 4 boxes, Wible said, but it’s an easy loss to swallow because it allows the company to conduct subsidized research and development that will lead to better tools for use in the cable boxes that Wible predicts will eventually fill out the company’s bottom line.

That’s in part because as more and more Americans get boxes based on TiVo technology, the company’s advertising model will really begin to blossom, further boosting what until now has been a marginal financial performer.

“I think there’s more value in their advertising platform than in their core DVR service,” Wible said.

The new boxes will be available in retail stores nationwide in early April.