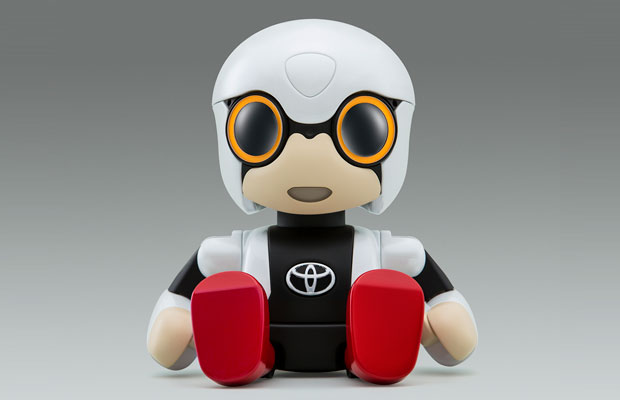 Gearing up for this week’s CEATEC trade show in Tokyo, Toyota on Monday announced that its compact-sized Kirobo Mini, pitched as a “communication partner,” will go on sale early next year in Japan.

The Mini is a smaller version of the astronaut robot Kirobo, which visited the International Space Station in 2013.

The Kirobo Mini is meant to take part in more down-to-earth affairs — such as routine driving trips. It’s about 4 inches (10cm) in height, and it can communicate via expressions and gestures, according to Toyota.

The robot will go on sale in Japan next year, priced at around US$400. Preorders will begin later this year.

To operate, the Kirobo Mini requires a connection to a smartphone via Bluetooth, and a $3 per month subscription service.

Toyota will demonstrate the Kirobo Mini at CEATEC, Japan’s largest trade show devoted to consumer electronics, which runs from Tuesday to Friday.

Japan’s original Kirobo earned the distinction of bolding going where no companion robot had gone before when it headed to the International Space Station to accompany Japanese astronaut Koichi Wakata in 2013.

Kirobo touched a lot of hearts, particularly among the robot-loving Japanese. The question now is whether Kirobo Mini can trigger robomania in North America.

Other practical robots have been introduced in Japan and then crossed the ocean to the United States, including Sony’s Aibo robot dog. However, they were only minor hits in the U.S., and nothing released stateside has ignited interest even close to the robot-craze that has gathered steam in Japan in recent years.

“The Japanese have a special affinity for robots above and beyond what most other countries have,” said Roger Entner, principal analyst at Recon Analytics.

“The difficulty for adoption in the U.S, is that it has to perform above a novelty item level,” he told TechNewsWorld. “We are slowly getting there.”

Efforts in recent years to bridge the cultural divide between Japan and the U.S. have been spotty. The Japanese long have had an affinity for some features of American culture — notably old Western films and mainstream pop music. Japan has exported its culture as well — from campy city-destroying-monster movies to the anime subculture, and from kitschy “futuristic” toys to all things robotic.

The first 1,000 of Softbank’s humanoid Pepper robots sold out almost immediately at nearly $2,000 each following launch two years ago. So far 10,000 of the small Pepper companions have sold in Japan, but they have barely even registered on the robotic radar in America.

“There are a host of reasons for this: Technophilia is high in Japan — the desire to adopt new technologies, even at the expense of looking geeky or odd,” he told TechNewsWorld.

Japan has a “homogeneous population and a willingness to adopt something if thought leaders are doing it or recommending it,” Kay added.

The country also is more or less culturally unified, which has led to a “benign monopoly in many sectors, leading to everyone adopting something at once,” he pointed out.

Pepper’s success as a companion robot in Japan likely is due to one significant reason: the country’s aging populace.

“Old people in Japan are beginning to treat robots like pets, companions and helpers, and nobody thinks it’s weird,” he noted.

“Japanese social rituals are notably ornate and time-consuming, and so busy people — which is everyone — would rather do business with a machine,” said Kay.

A robot “doesn’t require the proper form of address and a lot of bowing as you back away,” he noted.

It’s “not that robot-companions won’t come to the United States,” Kay said, “but marketers have often stubbed their toes trying to bring some rage in Japan to this country.”