In an effort to rekindle some love for the old-school kitchen telephone, Verizon Wireless is getting set to roll out a brand-new touchscreen VoIP phone that offers visual voicemail, calendaring, text alerts, local traffic, weather reports and the ability to send turn-by-turn directions to Verizon Wireless phones. The new phone is called the “Verizon Hub.” 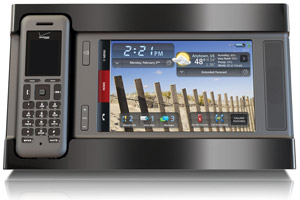 “The Verizon Hub reinvents the home phone system that’s been centered on your kitchen counter for years. We’re bringing huge new functionality to a common household device that will unlock its true potential. And in the process, Verizon Wireless is updating the tools busy families can use to manage their lives,” noted Mike Lanman, vice president and chief marketing officer at Verizon Wireless.

The Verizon Hub will connect to any high-speed broadband Internet connection, though it needs a router to plug into.

Its primary claim to fame is its 7-inch touchscreen, which features easy-to-navigate icons for its applications. In addition to the already noted features, it includes contact list management, a calculator, yellow page listings, previews for local movies and ticket-buying options. It also offers a companion Web site that lets users input new contacts and calendar entries that are automatically updated to the Verizon Hub.

The Hub also will let users update their calendars and automatically send a text when an appointment changes or as a reminder not to be late. Verizon says that users will also be able to incorporate their wireless devices through text, picture and video messaging between wireless phones and the Verizon Hub.

Verizon Wireless says its V Cast content will also be available on the Verizon Hub. When not in use, the new phone will double as a digital picture frame.

Unlimited broadband-based calling in the U.S. will run about US$35 a month with the usual standard features like call waiting and caller ID. The Verizon Hub will officially debut Feb. 1. The cost is expected to be $199 for the hardware after a rebate and a likely two-year service contract. The base unit includes one wireless handset.

And what about extra handsets?

“We’ll have additional handsets for other rooms in the house — retailing less than $80 each, though likely two or more together in bundles when we launch the device on Feb. 1,” Jeffrey Nelson, executive director of corporate communications for Verizon Wireless, told TechNewsWorld.

The Rise of VoIP?

“VoIP phones are growing in popularity — and 20 to 25 percent of customers are canceling home phone service. Some of them are going wireless only, and others are using one of the VoIP competitors like the cable television companies. This Verizon Hub is a way for Verizon to battle that migration,” Jeff Kagan, a wireless and telecom industry analyst, told TechNewsWorld.

“Customers may leave traditional phone service but remain a Verizon customer. That’s the plan,” he added.

Overall, Kagan said, VoIP is showing rapid growth. While it has been around for a decade, the quality was generally lousy until more recently.

AT&T has a similar phone manufactured by Samsung, the AT&T HomeManager. Its seven-inch touchscreen is fully portable, it has many of the same features as the Verizon Hub, and the HomeManager tosses in e-mail and recipes. It costs $299 and requires a recommended download speed of 1.5 megabits per second (768 Kbs minimum).