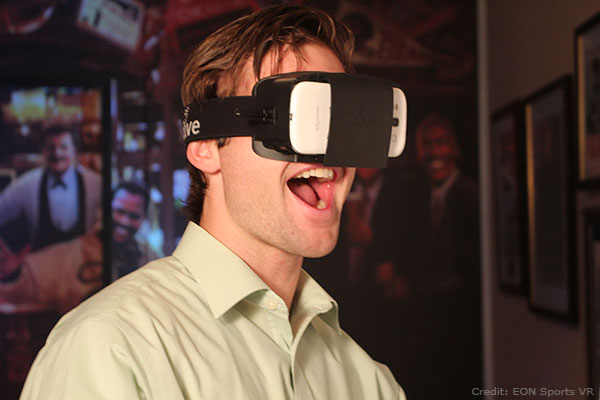 Quite a bit of buzz broke out recently in sports circles when a Stanford quarterback was caught on ESPN sporting an Oculus virtual reality (VR) face mask. Not that VR is totally new, but fans want more out of their athletes and the sight of such a souped-up technical edge on the field was a novel thrill. But that thrill won’t be novel for long as VR is headed for mainstream use in all sports from pro to little league and T-ball levels.

Just don’t let the sight of VR face sets on the field fool you — it’s a training tool and not a real-time, augmented reality honed-edge during the game. That’s not to say it isn’t a game changer though; after all, Stanford started using VR late in the season and the team had two of its best games shortly afterwards. While this prompts the causation vs correlation debate, few will argue that enhanced training is a big factor in game outcomes.

And when transformative training shows up in a few teams it invariably spreads to others.

“This reminds me of the 1980s when football players started lifting weights; I believe it is Nebraska that is credited with the first weight program,” says Brendan Reilly, CEO of EON Sports VR. “Once really huge, very strong football players began showing up to play, other coaches were like Whoa! Where did they come from? And they had to start weight-lifting programs too because, yes, player size and strength matters when you’re trying to win. Player size wasn’t an issue until a coach made it one though.”

“No one innovates for the sake of innovating,” he added. “You’re forced to innovate and tech is forcing that innovation in sports now.”

Just like weight training changed the players and inevitably the game as well, so too will VR and other training tech.

Founding Director of Stanford’s Virtual Human Interaction Lab and associate professor, Jeremy Bailenson says the Stanford quarterback caught on ESPN’s video was immersed in a field action play, but not necessarily in the action on the field at the moment. “We could let light in and convert to augmented reality at some point,” he said. “But the quarterback in that moment was immersed in a virtual reality scene.”

What are quarterbacks doing while immersed in there? For one thing, they’re learning how to read defensive plays in an instant and respond to them just as fast.

Yeah, but can’t they do that with old-fashioned football videos?

“What makes VR, VR is that the scene responds to your movements. Video just shows you something,” says Bailenson, one of the country’s leading virtual reality experts. “VR builds brain and muscle memory, it is practice and not a movie.”

About the Hardware and Software

Bailenson and his student and special teams graduate assistant on Stanford’s coaching staff, Derek Belch, developed the software the quarterback was using on the Oculus hardware.

Speaking of which, Facebook bought Oculus VR in March of last year for a reported cash and stock deal valued at $2 billion. The developers, Bailenson and Reilly, quoted in this story are quite literally developers. They make the software for hardware that already exists.

“Coaches and athletes are not tech experts so we provide out-of-the-box solutions that are usually bundled with the hardware,” explained Reilly. He says his company has a “ton of hardware partnerships.”

That seems to be the most common marketing arrangement. However, Bailenson says that Belch has plans to commercialize the software the Stanford quarterback was using and thus he cannot reveal too many details about it. He did say that the software is called “Quarterback Trainer” until the official name is unveiled — presumably when the product is announced for commercial and consumer use.

Reilly says that when VR hardware became mobile is when VR for sports really took off. Players can use the hardware anywhere instead of coming to a VR lab or being locked to a desktop somewhere.

There are several VR hardware brands on the market at various levels of sophistication and price tags. For example, Google Cardboard is cheap. You can even make your own quite literally out of cardboard — check out the instructions here. You’ll also see a list of vendors you can buy premade Google Cardboard from as well as a Makers Gallery on that same webpage. After you have Google Cardboard assembled and in hand, you take your pick of apps and off you go in a virtual world.

“Coaches can send kids the app over their phones and then kids can practice on Google Cardboard on their own time and at their own speed,” says Reilly. “Kids get better training and much more practice that way, compared to the old way where coaches only have a couple hours a week or day to work with the entire team, meaning most kids actually only get a few minutes of help and practice.”

“It’s amazing how VR can be used to help kids everywhere and at very little cost,” he said. “We can help kids who have no access to private training or sports camps become star players anyway.”

The important thing in new training tools is not the new shine of glitzy tech but its transformative work on humans. That means aligning the use of tech with a specific human benefit or goal is imperative.

Peter J. Fadde, Ph.D., Professor and Coordinator, Learning Systems Design and Technology at Southern Illinois University is not sold on VR training for baseball, although he thinks it is potentially a great pick for football.

“VR simulates action, the whole of action, meaning the quarterback can see and react to players across the field and all in movement. This requires spatial considerations and relationships in the quarterback’s decision making and so 3D VR is perfect for that,” says Fadde. “But for pitch recognition in baseball, the pitcher is always in the same place and the distance to home plate is the same as well. What I’m focusing players on is that first third of ball movement from the moment it leaves the pitcher’s hand. That’s way too fast and short for VR to be helpful, in my opinion.”

“What I have to give up in VR as a coach is 2D photo realism for a computer generated image,” he says.

Fadde is focused on improving speed and accuracy in the human equivalent of predictive analytics. He is training the batter’s brain in pattern recognition through repetition so that the batter can accurately determine the type of pitch almost the second the ball leaves the pitcher’s hand.

If the batter recognizes the pitch trajectory only after the curve breaks or the ball moves closer, it’s too late to hit the ball. By recognizing the pitch pattern earlier, the batter has more time to react and a far better chance of a hit.

“It happens over time and in the background of the mind. The batter’s brain, his analytics, pick up on the patterns and react accordingly,” he explained. “It feels intuitive or instinctive, but it’s really just a better trained brain. You’re getting experience in pattern recognition this way, and not just how-to information. It’s called ‘part task’. VR is more about ‘whole task’ training.”

So how is VR better at whole task training than say the old blackboard with chalked football plays in lines and stick figures?

Think of the two methods in terms of Google Maps. The chalkboard is the navigation overview where you can see the entire way from start to destination but with very little detail along the way. Street Views, on the other hand, do not show the entire route but the shape of the building you’re trying to find and where it is in relation to other structures and your position. VR is like Street Views.

Quarterbacks can see plays as they actually look on the field. They can react to the scene as if they are physically there and the scene changes according to their movements. This enables heightened pattern recognition from the field perspective, i.e. the player’s perspective, rather than from the bird’s eye view or helicopter perspective. It’s the difference in imagining a defensive team rushing your way and actually seeing them coming to mow you down. Reaction times improve as the QB moves through the other team’s defensive plays over and over again.

“All actions come from thought,” says Reilly. “Making decisions before the ball is snapped, instantly recognizing the coverage and adapting to it, calculating defense weaknesses, and doing all of that in one to two seconds is what changes the game to a win. And that mental and physical agility comes with training more than just the body’s muscle memory.”

And that’s the bottom line to VR training in sports. While once the focus was on building the players’ physical size, strength, stamina, physical agility and muscle memory, now it’s all about doing the same for players’ minds.

Expect to see VR training spread throughout all sports at every level. Shortly thereafter, expect it to spread in the performing arts too, for the very same reasons.

Pam Baker has written hundreds of articles published in leading technology, business and finance publications. She has also authored several analytical studies on technology, eight books, and an award-winning documentary on paper-making. She is a member of the National Press Club), Society of Professional Journalists and the Internet Press Guild. She can be reached on Twitter at @bakercom1. You also can connect with her on Google+.